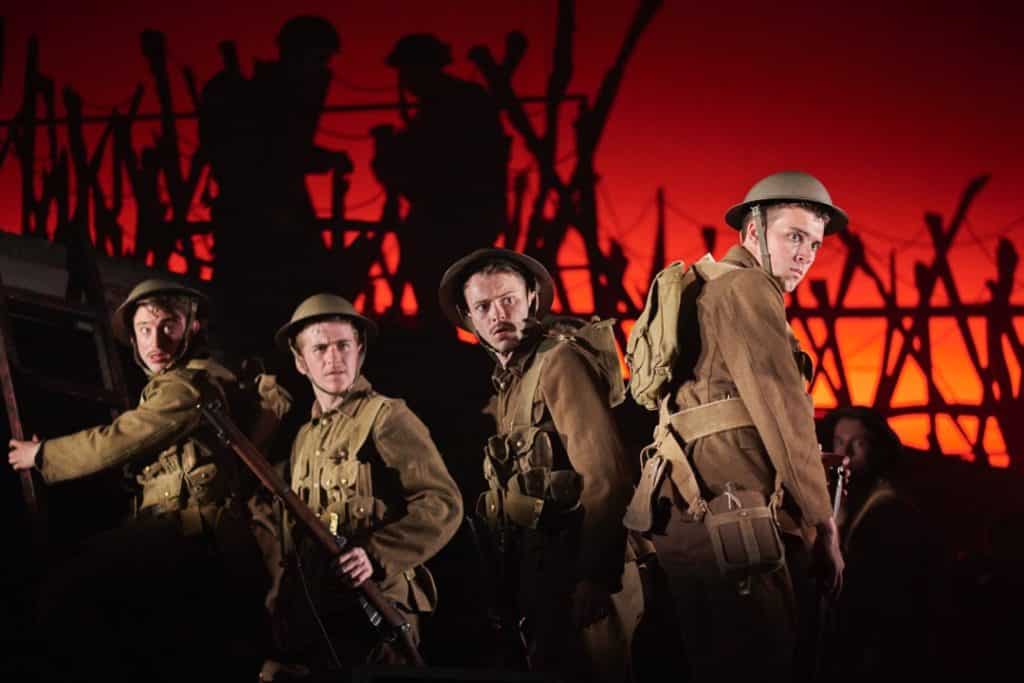 The NYMT, 40 years old this year, is a really rather remarkable organisation, and this, their flagship production in this summer’s season, housed for two magnificent days at Frank Matcham’s splendid Hackney Empire, was a really rather remarkable event. A gala audience turned out to cheer, laugh and weep at this epic story of a Leeds brass band during the Great War, propelled like a Vickers shell from a harmless extra-curricular club for factory workers and into the trenches of Flanders.

Benjamin Till has researched this story for – literally – decades, written the script (with dramaturgy from Philippa Goslett, and additional lyrics by Nathan Taylor and Sir Arnold Wesker), and then embarked upon the herculean labour of transforming all that into a unified musical drama. The work was premiered at the Leeds City Varieties Music Hall two seasons ago, earning for the NYMT and its then creative team the UK Theatre Award for Best Musical Production. That production, by director Sara Kestleman, choreographer Matt Flint, and MD Benjamin Holder, has been recorded and is available from the NYMT. 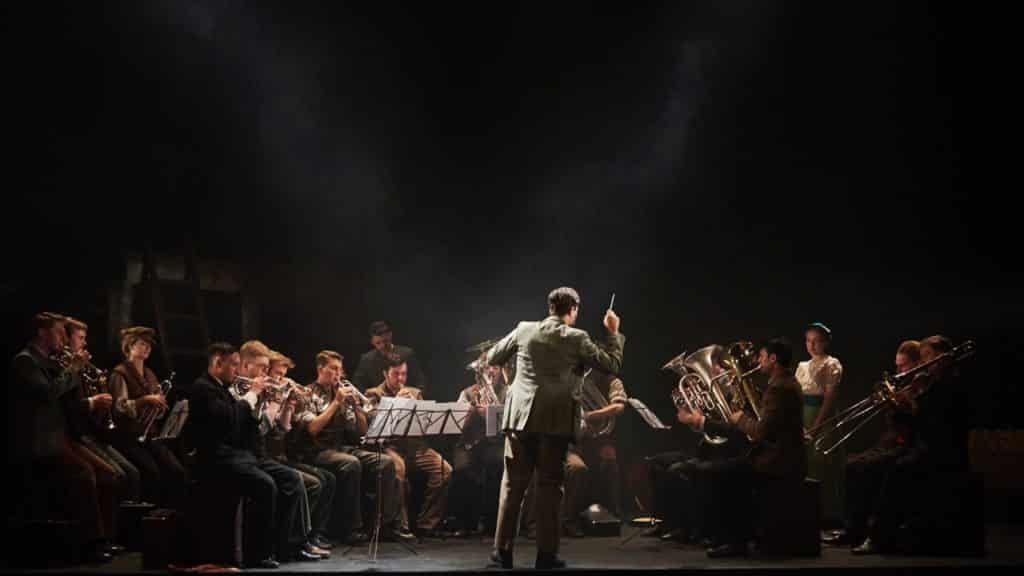 As I write this, I’m listening to that recording. The show’s score is one that you want – you need – to revisit again and again. Till and his collaborators are such major talents that there isn’t a single line, phrase or bar that doesn’t repay repeated hearing. Quite honestly, it’s a breath-taking achievement. Mark Shenton has said that it belongs in the National Theatre, and he’s not wrong. The subsidised sector could mount a production on this scale; however, the work might just as readily appeal – with a more streamlined company – to the commercial theatre. The National, of course, is looking for a successor to ‘War Horse’. Well, this is an interesting development and might well be worth thinking about.

Like Conor Mitchell, whose ‘The Dark Tower‘ I reviewed earlier in the week, in addition to being a great lyricist and dramatist, Till is a complete composer, who leaves none of his music to the work of other hands. Is it just accident that we should be rediscovering practically back-to-back the musical theatre scores of two composers who write every single note we hear – all of the arrangements, vocal and instrumental? The compositional bar does seem to be set very high here, especially when the music is so exquisitely, beautifully crafted to tell an exciting theatrical story.
The NYMT company at the Hackney Empire take us on a journey we will never forget, staged by visionary director Hannah Chissick working in symbiosis with choreographer Sam Spencer-Lane, in simple but terrifying designs by Jason Denvir, brilliantly expressively lit by David Plater. The sound design, by Tom Marshall, is a model of how to project 50 voices and a band of 20, in a cavernous space like the Empire, and more about this in a moment. 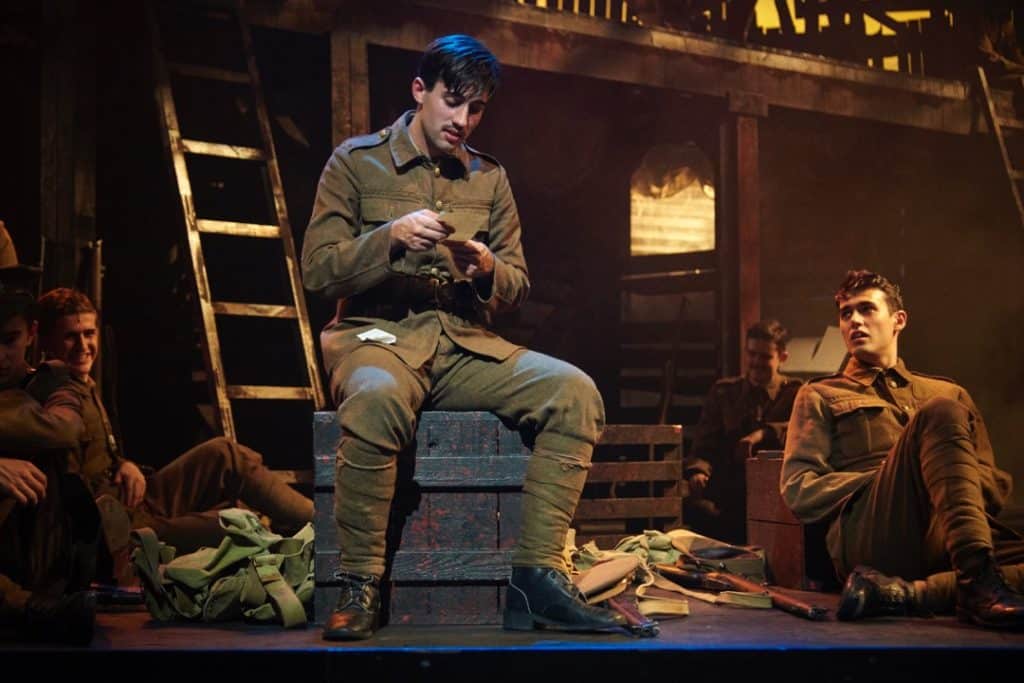 The stage language is striking, unsettling and constantly surprising. With nothing but empty wooden packing crates, stacks of munitions shells, and a guillotine-shaped diagonal rostrum slicing into the upstage to work with, the action is played out in a nearly open space. Yet, the costume, gathered together by Anne-Marie Horton, is relentlessly naturalistic, focussing attention entirely on the human individual stories being told in a world that seems to offer little in the way of personal comfort or shelter.

From the opening, almost Brechtian, beginning, as the company assembles, stage lights clanking on, house lights gradually dimming, we are in a brass band rehearsal, as everyone gathers to present an opening number that is new to the Hackney production: a run through of an apparently ‘traditional’ competition piece, of the kind that Vaughan-Williams might have written and that a band like the one we see might well have played. The cast are in working clothes. They might well be employees at ROF Barnbow, Leeds’ immense armaments factory. Ingeniously, we are seeing a mix of pit musicians in costume brought up onstage, actor-musicians playing with them, and some actors miming as if they were also, and with subtle support from some heavier percussion below the stage. The effect is perfectly harmonious, but it is typical of the complexity of the coordination of elements that is another of many joys of this presentation.

We must also remember – even though it seems impossible – that this youthful company have put the entire production together in just a fortnight over the Easter vacation, before reconvening in the summer to absorb extensive rewrites and then to learn and perfect the production in, um, eight days. Yes. Eight days. There are 33 of them in the company (just 7 of them surviving veterans of the 2014 production); and 18 musicians, many of whom are onstage, playing, a lot. With just two days in the building before the opening, the technical rehearsal, with its fiendishly complicated sound balancing to get absolutely right, left only enough time to do the dress rehearsal for the first act: what we saw on the night of the performance of the second act was the very first occasion the company had played it together in full. Nerves? Not a hint of them. There are stand-out performances from so many of this excellent group with hardly space to do them all justice here, including: Ruby Ablett; Laura Barnard; Anna Cookson; Lucy Crunckhorn; Madeleine Ellis; Oscar Garland; Crispin Glancy; Ben Hiam; Adam Johnson; Robyn MacIntyre; Matt Pettifor; Richard Upton; and Kitty Watson.

Till’s vocabulary is virtuosic and his command of orchestral and vocal colour symphonic in ambition and masterfulness. The musical numbers range widely between myriad influences, and this helps to broaden the canvas of experience to make this really feel like the ‘Great’ war it was. One moment we are in the sprightly, careless world of Gilbert and Sullivan, or perhaps that of Lionel Monkton, or jaunty parlour ditties, then we hear American ragtime, or the Tommies singing one of their ever so slightly sardonic but optimistic songs. Equally, Till explores the internal emotional lives of his characters in a vernacular that reminds us of the modern tradition of epic operetta, the world of ‘Les Miserables’ perhaps, another grand narrative of ordinary people struggling against impossible odds. The title song, a heroic tenor aria (sung with unforgettable power here by Ben Mabberley – who comes, appropriately, from the north of England, as do so many of this cast), has the powerful capacity to dig into the deepest emotional vulnerabilities of the listener that one finds in the melodies of, say, Nino Rota, another composer of epic tales about the clash of private and national destinies. And always, never far from our ears, there is the haunting euphony of cornets, trumpets, trombones and tuba, brightened with the ringing of a glockenspiel and enlivened with the pulse of a snare drum. 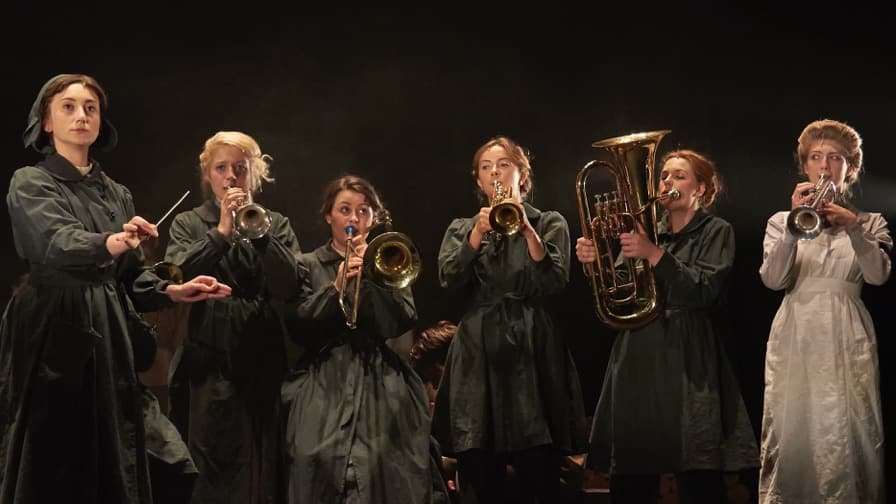 Again and again, all the way through this long and detailed work, balance and coordination are sustained with the highest level of artistry and skill. Musically, this is in no small measure thanks to the wonderful relationship between the composer and his MD, here a veteran of NYMT and also Head of Academic Music at Stowe, Alex Aitken. His meticulous, exhaustive preparation of the immense and endlessly varied score, combined with an insistence on being always true to the creative intention of the piece, means that when he stands on the conductor’s platform he exerts the most relaxed and unobtrusive and unfaltering control of the performance.

And this is another thing for which we have to thank NYMT. The sustained support and development of new talent, alongside the best and most experienced professionals working in the business, is another of the company’s glorious achievements. The great web of funding, benefaction, the tireless support of families and friends, and ticket sales (all, it should be noted, at highly competitive prices) that pays for this is an investment not only in the growth of the young people who pass through the company generation by generation, but also in the future of this industry itself.

With such success piled up in its wake, however, this company is certainly not standing still. Instead, it is forging ahead towards yet greater achievements. Talk amongst the great and good of British musical theatre who thronged to the theatre to see this marvel revealed wonderful developments afoot. So, keep your eyes open, and watch for the start of booking for the 2017 season.

TO FIND OUT MORE ABOUT NYMT EVENTS VISIT THEIR WEBSITE