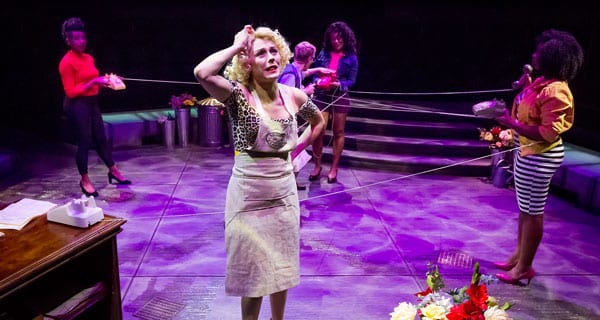 The beautiful, battered woman is singing about her dreams. A quiet life, a suburban house, somewhere that’s green. She imagines a washing machine and dryer and then, suddenly, unexpectedly, one arrives, is wheeled on. She talks of looking like Donna Reed and suddenly, unexpectedly, a Donna Reed lookalike is there. The lid opens on the dream machine and bubbles cascade out of it into the air. Is there anything more sure to raise a smile and indicate safety and comfort, than a string of bubbles? Lights descend on the dream home – multicoloured Tupperware containers providing the lampshades. It is about as perfect a realisation of the fictional ideal of an aspirational woman who wants to be a housewife in 1960’s America as can be imagined. And all the while, the beautiful, battered woman sings, superlatively, Somewhere That’s Green.

Curiously, this is not in the West End, not at the Donmar, not at the Menier Chocolate Factory, not at the Union Theatre, not at the Landor, not at the Finborough, not at Chichester nor at Sheffield. No. This is in Manchester, at the Royal Exchange Theatre, where Derek Bond’s inventive production of Little Shop of Horrors, the Alan Menken and Howard Ashman break-through stage musical, their second collaboration, is, quite rightly, playing to packed houses.

Seriously – anyone interested in good productions of musicals should hot foot it to Manchester to catch Bond’s work. Central to its success is an idea that Ms J Rourke and Mr B Sher should adopt going forwards: when doing a musical, cast people who can really sing the roles in the show in a way which does justice to and gives full value to the composer’s score. Every member of the cast here can really sing – and act. It’s pure joy to watch them perform.

Little Shop of Horrors is an odd piece. It has some fabulous tunes and a couple of passable ones. Its story is macabre, satirical and ludicrous, mashing together cult Sci-Fi “B”grade films, romance tales, the fantasy of the American Dream, domestic violence, the legend of Faust and musicals themselves. Those who find it odd when Maria bursts into song in The Sound Of Music are unlikely to cope with the sight and sound of a murderous plant belting out “Feed Me“. Those with fertile imaginations will have a great time.

Still, it is precisely this wild mixture of notions and themes which makes this musical compelling. Anything can happen in this world – and Bond ensures it does. He has marvellous assistance from designer James Perkins, who makes a virtue out of the bare, open, in-the-round space that the Royal Exchange offers. The musical can’t be staged the way it has previously been; there is, for instance, no Proscenium Arch from which the gigantic version of the maniacal plant can lunge into the audience. So Perkins adopts an entirely different approach – suggestion is more important than construction.

Settings are evoked simply and cleanly, sometimes by a single piece of furniture. But the commitment of the actors ensures that there is never any doubt where the action is occurring: the flower shop, the street, the dentist’s office, a dream. Everything is crystal clear, the pacing never flags and the overall sense is one of absolute joy.

Central to this are the puppets designed and directed by Toby Olié. Audrey II is the killer alien plant the “hero”, Seymour, purchases in mysterious circumstances. Audrey II feeds on human blood and so needs a variety of sizes to demonstrate the growth which is achieved as Seymour goes on his mini-Sweeney Todd frolic. The puppet plants which Olié produces here are wonderful, that magic combination of fascinating and repellant. Human operators give Audrey II life by supporting and manipulating its parts but they never intrude; the sense of Audrey II as a functional character is quickly established. The three performers, James Charlton, CJ Johnson and Nuno Silva (who spectacularly voices Audrey II as well as doing the lion’s share of the puppetry) never seek the limelight – each, particularly Silva, excels.

Within the constraints of the mad narrative, Bond opts for a low-key approach to the melodrama, especially from Seymour, Audrey and Mushnik. This more naturalistic approach pays real dividends given the pared back production values. The characters all get full measure and it is them and their story which dominates proceedings, not design wizardy.

Gunnar Cauthery makes an excellent Seymour, all shy, geeky and naive. His Faustian pact with Audrey II sees him lose a lot of his own blood, but it also provides him with a chance to be noticed by his beautiful shop assistant colleague, Audrey. Cauthery is adept at showing the simplicity of Seymour, and finds gentle comedic contours for him so that he is not seen as monstrous when the body count starts. He sings truly and sweetly, his timing is excellent and the sense of hopelessness that overwhelms Seymour is sensitively conveyed. The duets between Cauthery and Kelly Price’s pitch perfect Audrey are thrilling and terrific.

Price is luminous as Audrey. She plays her as close to real as possible; no Barbie Doll cuteness here. No. This Audrey has suffered all of her life and is in a pattern of abuse. How the dentist treats her is distinctly unfunny – and rightly so. Price conveys the pain and sorrow just as effortlessly and completely as she radiates hope and passion when delivering the song of the evening, Somewhere That’s Green. Using all of her vocal range, she belts when she needs to but also delivers soft singing of glorious, fragile beauty. It’s a consummate, completely thought through performance – her entrance in the pink dressing gown, just before Audrey succumbs to Audrey II, was especially powerful.

Sévan Stephan is wonderful as the fussy, complaining flower shop proprietor, Mr Mushnik. Full of life, funny and calculating, he brings the character alive in a true comic book sense – the darkness is there, but dancing on the edges. He has a superb voice which he uses to great effect in both dialogue and song. Terrific in every way.

Ako Mitchell has a field day with a variety of roles and while he is excellent in them all (I particularly liked his final cameo as the businessman who wants to franchise Audrey II worldwide, thereby ensuring the destruction of humankind) he really shines as the demented, dangerous and downright sadistic dentist, Orin Scrivello DDS. Wisely, Mitchell never seeks sympathy for Scrivello, the man who hits his girlfriend (Audrey), relishes in inflicting pain on his patients (his small scene with James Charlton as his hapless patient saw them both in superb form) but revels in highlighting his toxic persona. Vocally, he is pure gold; his delivery of Dentist! was assured, funny and full of energy.

The trio of urchins are dynamite: Ellena Vincent, Ibinabo Jack and Joelle Moses. They each have powerful, resonant voices with remarkable tops; they harmonise explosively and bring real brio to everything they do. Fearless, sexy and perfect, in their glittery gowns or street wear, this is as formidable a trio as one could hope for. Skid Row and the title song were performed with real guts, voice and style. Winners all.

Tim Jackson has double duty, as Musical Director and Choroegrapher. He discharges both roles with distinction – especially good was the routine with the telephones in Call Back In The Morning which opens Act Two. And, as mentioned above, the staging of Somewhere That’s Green was magical. From a musical point of view, there are no weaknesses vocally; everything is sung properly and as Menken’s score requires.

As always, there could have been a bigger orchestra, especially brass and wind instruments, but the small ensemble worked effectively in the space. Richard Brooker’s sound design was too loud for my ears, especially in such an intimate space with singers who can achieve nuance in vocal lines. Not everything needs to be pumped through the sound system at 10 on the musical equivalent of the Richter Scale.

Richard Howell’s lighting design was very effective – moods created by the actors were sustained and emphasised by the lighting. And the entire blackout at a critical plot point was a genius moment.

Bond’s production of Little Shop Of Horrors is remarkably good, truly inventive. It is a credit to the Royal Exchange Theatre that they can produce such quality musical theatre by relying on what seem to be old-fashioned values (going by the West End anyway): excellent material, the right director and designer, and a cast all of whom who can actually act, sing and dance to give full measure to every musical and theatrical aspect of the production.

Go to Manchester and enjoy some gore, glitter and great singing and acting. Not to mention splendid puppetry.

Little Shop Of Horrors runs til 31 January at the Royal Exchange Theatre, Manchester.