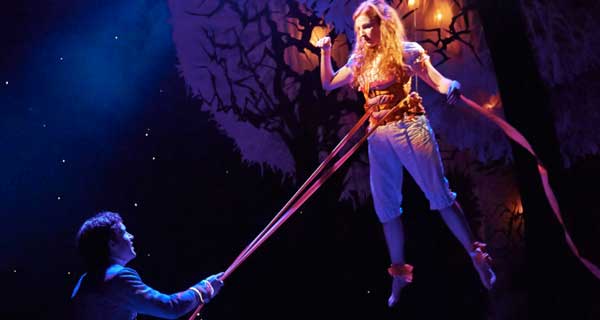 There is something truly breath-taking and miraculous about Rae Smith’s beautiful, evocative and thoroughbred fairy tale design for the National’s debut production of The Light Princess which opens tonight at the Lyttleton.

It is difficult to remember a time when, upon entry, the auditorium of the Lyttleton felt so warm, so inviting, so full of tantalising expectation as the gorgeous faux proscenium and the drop, which features a Grimm Brothers or Hans Christian Anderson style map which tells its own little story of divided kingdoms and magical creatures in dangerous forests, here provide.

When the action starts, it is quickly clear that there are two fundamentally different kinds of performances at work here, both under the overall control of the visionary Marianne Elliot. The first are the humans, the Royal families and the stock selection of commoners, servants and advisers, to whom we shall return. The second, and most miraculous, are the puppet creatures ( winning creations brought stunningly to life by Toby Olié and Finn Caldwell and the expert handlers, Owain Gwynn, Tommy Luther, Emma Norin and Nuno Silva ) who add colour and fantastical texture to the palaces and surrounds, especially the lake, where the action unfolds.

There is a remarkable mouse, some frisky exhibitionist frogs, sundry birds, some shark-headed beasts of attack, graceful storks, gaudy plants and fish, both dead and alive – not to mention, just when something spectacular is required, dragons. It is not possible to convey in mere words the beauty, both haunting and humorous of these various creatures: to quote Charlie and the Chocolate Factory, they have to be seen to be believed.

This is especially, and both compellingly and romantically so, in the case of two particular character concepts at play as part of Elliot’s vision: Zephyrus, the Prince’s prized falcon and the lightlessness or lack of gravity which afflicts the titular Princess. Ben Thompson is immaculate as Zephyrus and gives, easily, the stellar performance of the evening. The blue falcon is alive, funny, menacing, heroic and, most importantly, real, complete and believable: when he tears out the eyes of the ghastly King Ignacio, it is the triumphant moment of action of the evening. Thompson is graceful, sinewy and effortlessly keeps to the shadows while, literally, making Zephyrus fly – in imagination and the air.

As do the quartet of acrobats who, as a well honed group, keep the Princess afloat, sometimes with the aid of fly wires, sometimes without. They do nothing to detract from the Princess herself and quickly disappear entirely into the background as you accept their joint presence as the concept of weightlessness. It is as bold and audacious a concept as they come in theatre and it works with an ease and simplicity that obfuscates the immense skill at work. Watching the Princess float, as she does almost exclusively throughout proceedings, would have been dreary if she simply used harness and wires: Elliot’s solution to this problem is one of the key delights and strokes of genius that makes this production live on in the memory.

Which is as well, because the book (Samuel Adamson), the music (Tori Amos), the lyrics (both of them), the choreography (Steven Hoggett) and, most depressingly, many of the performances (casting by Alastair Coomer and Charlotte Sutton is beyond belief in so many cases) do their very best, in an electric combination, to deprive the occasion of any consistent spirit or joy. It’s a complicated story and it is not conveyed – at all – through the words spoken and the lyrics sung, when they can be heard which is not that often.

It is nearly impossible to understand what motivates the central characters, especially the Princess, and the ending of Act One, while visually dazzling, is unfathomable as is the reason for the parting of the Princess and Prince Digby in Act Two. The story is simply not told, in the writing, with the clarity required.

As to the music, for the most part it is a tsunami of white noise. People often harp on about Sondheim not writing tuneful music or melodies one can hum (a position I do not accept) but on the basis of this work, compared to Tori Amos, Sondheim is Irving Berlin. The score is not woeful, it’s just odd and repetitive and not particularly varied, either tonally or rhythmically.

There are passages which open the senses: the Act One opening is intriguing and dovetails nicely with the finale, the Act Two opening in the Lake has a poetic joy and harmonic interest which is never matched, the Princess’ eleven o’clock number, where she finally cries and achieves gravity, is the most compelling solo of the evening – and the last five minutes demonstrates what an absolutely remarkable piece of work this could have been. The joy, the soaring power, the beauty of the finale as the entire company sings in harmony and with melodies that truly enchant – well, if that was the norm for the work, this would be the musical of the century. But it’s not the norm and it isn’t a good musical.

It is often said of Judi Dench that people would pay to hear her read the phone book – I think the same can probably be said for Rosalie Craig in relation to singing the phone book. She has a voice of remarkable power, beauty and tone and she uses it for all it’s worth here. And she makes the music sound better than it is.

But she does not convince in this production as the Princess. She is just too old given the casting of Nick Hendrix as her romantic interest. Despite her vocal prowess, the role requires a particular chemistry between the Princess and the Prince, her father and her “best friend” Piper. There is no chemistry here in any of those cases. It’s not Craig’s fault; it’s the casting. If Hendrix is the Prince, then you need a real ingenue, a baby superstar as the Princess (such as Vivien Carter who covers Craig, but this is the National so they could also take a risk on a talented but compete unknown – either way, someone more perfectly matched to the role, young, unformed, naive, precious and fragile) to make the central balance work. Michael Xavier could have played the Prince against Craig in this production and immediately it would have been palpably better, simply because they are similar talents with similar experiences and sensibilities.

Hendrix is a good, winning actor, suitably manly and handsome in a boy-Prince kind of way (although his costumes are curiously ill-fitting or, rather, do not do him justice and he is forced to open Act Two in his boxers for no good reason except to display his gaudy falcon tattoo and impressive six-pack) but he is vocally out of his depth with this score and that, and the disparity between he and Craig, drains away most of his effectiveness. But he is by far the best male performer on stage.

As his brother, Llewelyn, Kane Oliver Parry is completely ineffectual throughout the piece, (cannot sing well enough either) momentarily indicating a flicker of talent when he delivers one line at the end of the show which brings down the house. Clive Rowe, in Clive Rowe stock character number two mode, is excruciatingly bad as the father of the Princess, and it is at his feet that a lot of the lack of clarity of the piece falls. He is largely incomprehensible and though he is described as a kind king who lost his way, he does not play the part that way. His soft milk-pudding-slightly-on-the-turn performance is woefully inadequate for the demands of what is clearly the most difficult role in the show and the one upon which almost everything turns. He hits the notes, but with a sledgehammer and none of it is pleasant to listen to. He is a disaster.

So to is Hal Fowler as King Ignacio, a part that throbs with potential – this could be a searing dark villain as vicious and malevolent as they come, but in Fowler’s hands he is merely a wooden stink bomb.

It falls to the supporting female cast to provide lustre and interest and they do: Laura Pitt-Pulford is superb as Digby’s falconer and gets the night’s biggest laugh; Malinda Parris is wonderful as the no nonsense dragon-dispatching Serjeant-Arms and gets the night’s second biggest laugh; Amy Booth-Steel, Piper, while not on fire in Act One, redeems herself in Act a Two, making the most of her anguished solo and her moment in the sun with Llwelyn.

The ensemble sing well, but their costumes and choreography remind one of third rate Disney rather than first rate National Theatre magic – and they are almost all very young, when the script requires a clear range of ages. There is nothing more dispiriting in a professional production of a musical than watching young performers do cod “old acting” – yet that is what is served up. The three erstwhile suitors for the Princess (David Langham, Adam Pearce and Caspar Phillipson) are unfunny and dull, dull, dull – one rather wished the puppeteers could breathe the life into them that they showered upon the animals at the Lake.

What is most remarkable, however, is how, at the very end, when the wedding occurs and the baby born out of wedlock is finally seen, every single person on stage and every element of the production suddenly fuses and the result is ebullient, utterly magical and life affirming. People may well remember that as the experience of the show – certainly those are moments of theatrical magic that will stay with me for some time to come.

But they are not enough, not by a long shot. And given the sheer beauty, magic and skill on display in every aspect of Rae Smith’s ever-changing set, superbly lit by the incomparable Paule Constable, I doubt that this work could be better staged than it is here. But it certainly could be better written (both in terms of text and tune) and much much better cast. Rosalee Craig is quite remarkable but her age and experience makes her Princess not as Light as the title and the sense of the piece requires.

It has to be said that, taking into account the whole experience, The Light Princess is no better or worse a musical than Viva Forever! In both cases, the book needs fundamental reworking, the score too, and there were avoidable casting issues – but each had/has real potential. The set, the design concept, the puppetry and Ben Thompson give The Light a Princess a serious edge, but as musicals, they are much of a muchness. They both need more work – much more work – and better casting.

There is a blankness, a flatness, which pervades the text, the music and the performances in a The Light Princess – once that is corrected by the authors, this could truly fly as Zephyrus does.