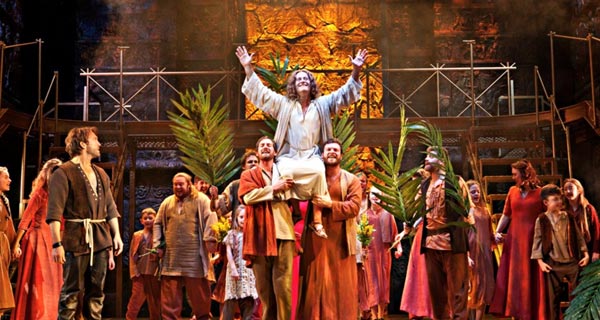 There is a gaggle of men in towels and some sort of wrap around underwear. There are a few women as well, but the women don’t seem interested in the men and vice versa. The men seem very very happy. Another man, with long hair and scantily dressed, is brought in by three very macho looking guards who may or may not be wearing a lot of leather. Long haired man is thrown on the floor. He whimpers.

Some hanging curtains suggest this might be a Turkish bath-house of some kind. There seems to be a leader, a very portly man, naked but for his towel and some garish, red nipple tassels. He has tight curly hair and seems to be wearing a lot of heavy makeup and mascara. He sings. And dances. Everyone dances, that kind of energetic boppy dance-step that might double as calisthenics. Everyone seems happier and happier as they dance. Except the long haired man, who continues to whimper, and the guards, who scowl and sneer every time either the leader or one of the towelled dancers look at them.

Surprisingly, this scene occurs in the current UK touring production of Jesus Christ Superstar which finished its time in Blackpool on 14 March. Directed by Bob Tomson and Bill Kenwright, with choreography by Carole Todd and musical direction by Bob Broad, this is not a lavish production of the 1970 mega-hit from the (then) young team on the block – Andrew Lloyd Webber (music) and Tim Rice (lyrics), but it feels fresh and is full of vigour.

The directorial team responsible for this revival, Bob Tomson and Bill Kenwright, have form with Jesus Christ Superstar. They helmed a UK tour in 2004. It is not clear whether this production is a revival of that production or not; there is no express reference to it in the programme, although the picture on the cover of the programme seems to be from this production except that the cast in the photo is not the cast in the production. Whether this is a fresh revival or a restaging of the 2004 touring production, one thing is clear: this is no ramshackle rehash mounted for a fast buck. It is a serious revival from Tomson and Kenwright, and, happily, vastly superior to their recent efforts with Evita.

Paul Farnsworth provides an intriguing and potent set design. Huge thick pillars dominate the stage, most of them covered in detailed sculptures, giving the impression of grandeur, power and ritual. There are metal ladders ascending to a U-shaped metal framework, from the centre of which descends a set of stairs. The playing area is dominated by a grand, moveable crown of thorns, suspended from the ceiling. Everything about the space is imposing, full of dread promise. It’s a tremendous setting for this piece.

But no matter how good a production looks, Jesus Christ Superstar can only work if the score is properly served. As in every musical, there are three distinct aspects to this: the orchestra, the sound system and the quality of the singing. Musical director Bob Broad keeps good control over the small band of musicians, and the style of playing is good. Some of the tempi is odd, though, and often there was a reluctance to let silence take the stage when a number finished. In a sung through piece such as Jesus Christ Superstar, those silences can make a real difference to the dynamic of the production, providing emphasis, time for thought. There is a surprising and disappointing lack of woodwind instruments; the focus is on keyboards, guitars and percussion/drums. The playing, however, is first class.

Not so Dan Samson’s sound design. Well, it might be the design, the operators or the acoustics of the venue, but the quality of the sound in the auditorium was not what it should have been. Mostly it was underpowered, with the rhythmic pulse of the songs not strong or clear enough; in other cases, most notably Heaven On Their Minds, it was just not loud enough. These are problems easily solved. Especially when, as here, the singing from the performers is so good.

Two of the principal cast, Rhydian Roberts and Rachel Adedeji, were not performing but there was no issue there. Their covers, Johnathan Tweedie and Jodie Steele, were excellent. Steele has a ravishing voice, full of warmth and depth. In both I Don’t Know How To Love Him and Could We Start Again Please? she was flawless. Tweedie also delivered the goods, especially in Pilate’s Song but also in Trial By Pilate, where the upper range of any Pilate is tested. Although the staging of the scene was dull, Tweedie was not.

Kristopher Harding shone as Simon Zealotes, his outstanding voice providing a real highlight in the first Act. As Peter, Edward Handoll was terrific, properly conveying the contradictions of the character. His betrayal of Jesus was well handled and his work in Could We Start Again Please? particularly good. Tom Gilling had no trouble with the vocal demands of King Herod, his strong and interesting voice rose easily to the task. But the staging of his big number, as a gay bath house scene, was offensively idiotic. This was not so much camp as grotesque, and truly unfunny. Gilling does what he is asked to do with gusto; his commitment and attack can’t be faulted. Which merely demonstrates what a pity the directorial choice was. A wasted opportunity.

The High Priests were outstanding. Cavin Cornwall, tall, menacing, and glowering, cuts an implacably Machiavellian figure as Caiphas. He has a great voice, an incredible range, all thunderous sonority at the bottom and bold and brassy at the top. Alistair Lee matches him wonderfully as the calculating Annas, his bright, ebullient vocal surges, all very high and thrilling, a constant pleasure. This Jesus Must Die was exceptional.

Returning to a role he first played in Gale Edwards’ 1996 Lyceum Theatre revival of Jesus Christ Superstar, Glenn Carter is in tremendous, if not quite heavenly, form as Jesus. It is not every performer who could successfully play this part over the course of nearly twenty years, but Carter is in remarkable physical shape and knows it inside and out: it’s a very finely honed performance, measured, thoughtful and full of grace. He has no difficulty expressing Jesus’ weariness and sense of fatal acceptance, as well as communicating his anger at injustice and his love and concern for those less fortunate. His final scenes on the cross are difficult to watch, so real is the agony that Carter conveys.

Real vocal stamina is required for the role, and Carter has it in spades. When not using his head voice, Carter’s sound is strong, rich, almost defiant in its brash, belty possibility. In head voice, it is accurate, ethereal and unsettling. Together, the contrasting styles present much opportunity for vocal gymnastics. Sometimes, it might have been more effective if the head voice passages were not as extensive as they are: Carter’s thrilling work in Gethsemane is slightly undermined by over-reliance on his head voice.

As Judas, Tim Rogers is a powerhouse of masculine rage and outrage, a fitting contrast to Carter’s Jesus. From an acting point of view, Rogers displays Judas’ complexity with candid clarity, surfing with conviction the tsunami of emotions and thoughts that engulf the world’s best known kisser. He is especially good at dealing with the consequences of his betrayal of Jesus and Judas’s Death is very powerful indeed. His suicide is genuinely shocking, extraordinarily effective.

Vocally, Rogers is in great form. His work in Damned For All Time and Superstar is exceptional. He has a golden timbre to his voice which can caress or cajole, a mighty range (the top of which is powerful and arresting) and knows how best to give full value to every note he sings. Again there was some odd reliance on head voice (suggesting that there must be more than performer choice at play) but it mattered not: Rogers is a first rate Judas in every way, but especially vocally.

This is a very entertaining, sometimes confronting, revival of Jesus Christ Superstar. Well worth seeing.