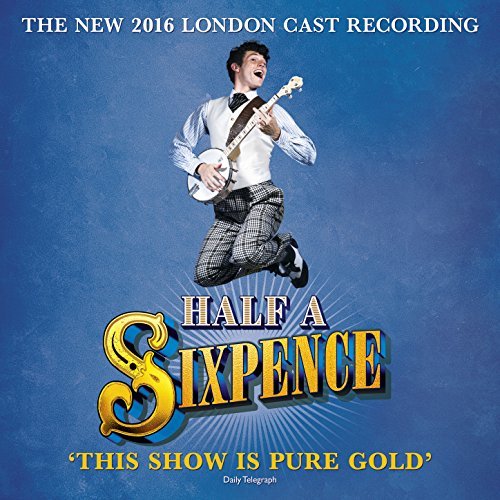 There must be a lot of musicals out there like Half A Sixpence, the hit musical vehicle by David Heneker that gave Tommy Steele a glorious great hit back in 1963.  Those musicals that over the years have dated are a bit out of touch with audiences even though there is a fondness for the original.

Enter George Stiles and Anthony Drewe, the British show-writing duo who apart from writing gorgeous material for their own shows have started forging a reputation as musical theatre revisionists (Sorry chaps hope you don’t mind that term). Their work on Disney and Cameron Mackintosh’s Mary Poppins, adding new material and expanding some of the songs from the film, which, in some cases were painfully short were stunning, and so it is with the new Half A Sixpence.

This new recording of the current London revival cast at the Noel Coward Theatre is a real ripper. I dare anyone to spot the joins. What has emerged is a delightful musical and a lively recording full of energy that I’ve been enjoying all weekend.

Of course, everyone knows Flash, Bang Wallop! but this album is not about moments. Listen to the recording as a whole and it is now a beautifully unfolding story with some absolutely glorious music and some great performances.

Charlie Stemp’s lovely lilting vocal on tracks like Then In The Middle There’s Me and She’s Too far Above Me are beautifully delivered. Emma Williams and Devon-Elise Johnson work wonderfully well as the two women in Kipps’s life. Gerald Carey and Ian Bartholomew as the photographer and Chitterlow respectively have great moments, but ultimately the musical now works as a whole.

I can’t stop listening to the recording from Track 15 to the finale comprising, You Never get Anything Right/ I Know Who I am, We’ll Build A Palace / I Only Want A Little House, In The Middle That’s Me, Long Ago (Reprise) and Flash, Bang, Wallop! and the finale is wonderfully moving and this recording really captures the emotion and drama of Kipps in turmoil as comes to realise that it is Ann and not Helen who holds his heart.

Graham Hurman’s lively twelve piece orchestra on the recording is alive and bright throughout. From the tinkly honky tonk style piano through the lively banjo sections in the score, there just an infectious enthusiasm that seeps out of your speakers as you listen.

Of late, there has been a trend with West End cast recordings to record the shows live and I must admit that I’m a fan. A bit of audience reaction and that live theatre feel on a recording, can if done well really capture that live theatre feeling. If you’re like me I often bemoan the absence of linking dialogue or a line of dialogue that serves as the introduction to a favourite show tune. For instance Desiree’s dialogue amidst Send In The Clowns, so small but so important. I am happy to report that this live recording is incredibly well done right down to the exit music complete with audience enjoyment.

Live theatre lovers are probably going to hate me for this one, but I have to say that I actually enjoyed the Half A Sixpence recording more than I enjoyed the show – but not by much! Just enough to realise that as a result, I’m probably going to revisit the show with a better knowledge of the score than when I first visited. I don’t know about you but I can relax and really enjoy a show when I’m familiar with the music.

PURCHASE TICKETS FOR HALF A SIXPENCE AT THE NOEL COWARD THEATRE