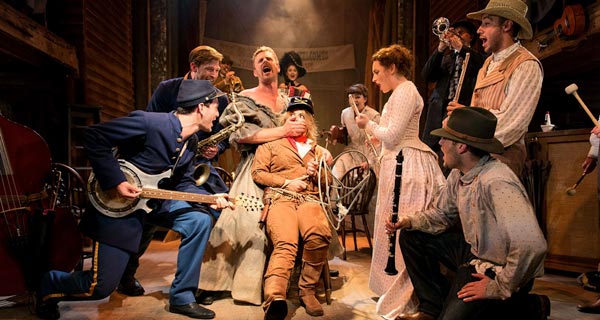 On the strength of his score for Calamity Jane, it is a great pity that Sammy Fain did not write more full scale shows for the Broadway stage. He wrote for many revues that played the Great White Way and for films (apart from Calamity Jane, he also wrote the Oscar winning Love Is A Many-Splendored Thing) but only a handful of musicals, most of which are unlikely to be revived.

But his score for the Doris Day/Howard Keel film musical, Calamity Jane, is rich and tuneful and contains many hits: The Deadwood Stage (Whip Crack Away), The Black Hills of Dakota, Just Blew In From The Windy City, I Can Do Without You, It’s Harry I’m Planning To Marry, A Woman’s Touch, My Love Is Higher Than A Hawk, and, of course, the Oscar winner, Secret Love. It’s a jolly, rambunctious, and deceptively romantic score, sentimental and quirky. Paul Francis Webster’s lyrics are the perfect witty accompaniment.

On its own, the score is reason enough to see the film and, probably, the reason the film has enduring appeal. The stage adaptation of the film has never been seen on Broadway or the West End and in this age of musicals-from-famous-films, that seems slightly odd. There was a 1994 outing of Calamity Jane at the Leicester Haymarket, starring Louise Gold, but that appears to be the only professional outing in the UK until now.

Now touring the UK is Charles K Freeman’s adaptation of the Calamity Jane film, a production that began life at the resourceful Watermill Theatre under the direction of Nikolai Foster. It’s another of their musicians-as-performers productions, which see the traditional pit orchestra replaced by onstage performers who play various instruments.

Calamity Jane is the least likely vehicle for such a treatment, but it has to be acknowledged that Catherine Jayes’ superb orchestrations make it all work radiantly. Yes, there is recorded music, but the hollowness of that effect is more than offset by the myriad of real sounds made by the accomplished cast on a range of instruments.

More than that, the entire production adopts a make-do philosophy which sees the orchestral accompaniment as just another of the clever something-from-nothing design imperatives. Matthew Wright provides a set that both makes do and does make; it’s ingenious and entirely theatrical. A fake proscenium sits against what seems like a rehearsal space in front of a small but efficient stage. So, there is a clear sense of a theatre within a theatre. This single device overcomes much of the trauma in relocating the film to the stage.

Where the film could revel in its real life backdrops, whatever they be, from moving, accelerating stage coach to blissful countryside vistas, Wright’s mercurial set allows all of those spaces to be imagined within the confines of the fake proscenium. This means less money, more imagination; less fuss, more suspension of disbelief. It’s a terrific set design in every way.

Wright’s costumes are equally clever and present the myriad of types to be expected in the gestalt concept of America’s Wild West. In truth, it might have been better for some of the costumes to better reflect the physical proportions of the performers than the film costumes, but it is not a fatal flaw. No one looks awful in Wright’s costumes and many of the cast look fabulous.

Given that they are all, bar Calamity Jane herself, required to play a musical instrument, the cast is exceptionally talented and bring real life, energy and style to every aspect of the production. Nick Winston’s fiery and exuberant choreography is vital and endearing, giving full value to both the isolation of Deadwood, where the action occurs, and the sense of community enjoyed by the residents and the nearby Fort.

Tom Lister is wry, laconic and incredibly laid back as Wild Bill Hickok. It is a performance of pure joy. He sings very well throughout but his My Love Is Higher Than A Hawk is a genuine highlight and sets Act Two off beautifully. His rapport with Alex Hammond’s Danny and Jodie Prenger’s Calamity is finely judged and ensures that the humour and the romance gets full value. His time dressed as Queen Victoria is hilarious and emphasises his manly assuredness.

Hammond is pitch perfect as Danny: the good looking Army man who knows he is good looking and expects the ladies to agree. Smart and smarmy, Hammond’s Danny is the perfect foil for Wild Bill and the perfect objet d’art for Calamity. Bobby Delaney is equally perfect as Frances Fryer, and he brings a real sense of mischief, fun and subversiveness to his performance. He is incredibly musical and this shines through everything he does, in remarkable and very satisfactory ways. He has a sweet, true voice and every moment he is on stage is joyful. Delaney also does serious piano duty and acquits himself very well in that department too.

Phoebe Street is a delight, absolute and unqualified, as Katie Brown, the girl who would be a star. He transition from scared wannabe to accomplished Deadwood diva is skilfully achieved. Her work in A Woman’s Touch is absolutely delicious. She has a gorgeous voice and real star appeal.

It’s not all cracking away though. Anthony Dunn is too one dimensional as Henry and there seems a directorial command that he attack everything at breakneck speed. All this achieves is a flat, uninteresting characterisation. It’s strange given the other work on stage. Christina Tedders gets away with Adelaid Adams, but only just. The set-up for her appearance is oddly ill judged, given her looks and ability: her womanly charms should be exalted, but that is not how it comes across. She has a nice voice, but, in truth, it needs to be much much better than Street’s for the conceit of her replacement to work.

In the title role, Prenger, though wildly miscast, gives her all. Calamity is a part for a pretty woman who can successfully convince as a possible man; a true tomboy who can turn Princess. Prenger is a pretty woman who is unmistakably all woman. Casting her gives the jibes and fears of the menfolk of Deadwood an unintended nasty ring. (Well, if the result was intended, it is wholly misconceived).

However, Prenger has an easy, broad comic style, and she can punctuate jokes with aplomb, either with a deft double-take or a hard look or a nicely delivered line. She embraces the conventions of the production with gusto and so scenes like that which see her ride out of town after Katie and jump from horse to stagecoach work wonderfully. Prenger makes you believe.

She is quick on the trigger too, happily at ease with her gun and not remotely afraid to use it. Likewise, her whip cracking is splendid. Vocally, she is in good form. Her diction, however, needs to be cleaner, especially in the number where she introduces the townsfolk: The Deadwood Stage. Her work in her duets with Bill and Katie was her most pleasing, and those two songs were real treats.

She sings Just Blew In From The Windy City with vivacious determination and leads the cast in a great romp of a number which is the true highpoint of the production. Secret Love is not the peak musical moment it could be, the long brilliant notes that make that song wonderful don’t get proper attention, but that is not to say Prenger does not get away with it. She does.

This is a theatrical treat: a good, old fashioned musical done in a new fangled way. It’s great to hear such good songs so well sung by a cast that basically accompanies itself. Prenger’s crowd pleasing turn as Calamity, together with first class support from Lister, Delaney, Street and Hammond ensures an evening that moves along at Whip Crack Away pace and makes you long for those Black Hills of Dakota. No matter how often that tune returns during the show…

Click here for more information on the Calamity Jane tour.