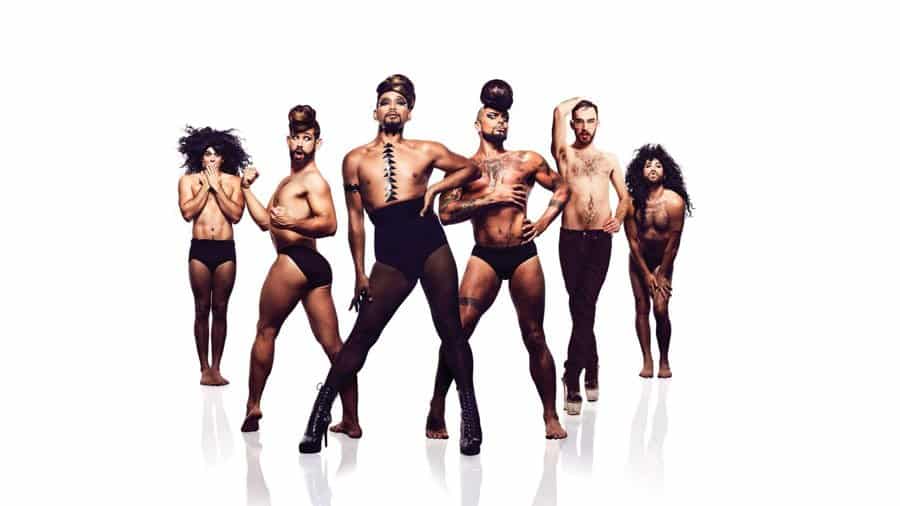 Briefs Close Encounters
London Wonderground
20th July 2017
4 Stars
Book Now
This is high quality trash. Basically, it’s a bunch of guys getting (most of) their kit off and doing some amazing variety stunts.  It starts with a very noisy disco’ish club ambience, with flashing lights and intimidating cheap glamour, and stays at that pitch pretty much uninterrupted for the 65 minutes or so of its existence.  True to its name, it is filled with short, shorter, and the shortest of acts – a bit of tumbling, a bit of jumping, a hoop dance, a baton dance, an aerial act with a rope, a more dangerous aerial act with a cage – and so on, and a great deal of self-conscious prancing about and posing.  Wearisome, yes, but mercifully well executed, often with panache, with cheekiness, with some style.  It doesn’t – quite – overstay its welcome.

If you are looking for some truly mindless diversion, then this is probably top of the range.  The gang on stage are, for the record: Fez Faanana; Mark Winmill as Captain Kidd; Louis Biggs; Harry Clayton-Wright; Thomas Gundry Greenfield; Dale Woodbridge-Brown; Thomas Worrell.  I’m sure they’re all very nice boys, especially the ones with those double-barrelled names; if only they had a better script writer! Yet, the word in the Underbelly biergarten is that this version of their entertainment is a great deal better than what they last served up (last year, and the year before): it is more ‘conceptual’.  For this, apparently, we have to thank Fez, who is the ‘Director’ of this little opus; Mark is the ‘Creative Associate’, which might mean almost anything and probably does; and there is, believe it or not, in an event almost entirely consisting of playback tapes, ‘Musical Direction’ by Kim ‘BUSY BEATZ’ Bowers (his/her capitals, not mine); there is Lighting Design and Technical Direction – loads and loads of it! – by Paul Lim; the frocks are by Dallas Dellaforce (yes, that DOES sound like a character from ‘Vegas In Space’ and, just maybe, it might hale from such a quarter); Fez dishes out the spiffing choreography – on a fairly titchy raised platform – often in perilous heels… respect!; and Blake Granston handles the production and rigging. It’s in the ‘Spiegeltent’.  What that neologism is supposed to portend heaven only knows, but there are mirrors – sorry, Spiegeln – all around the sides, affording the illusion of space.  There is not, however, anything like a functioning a/c system, and so be prepared to shed your layers, too, or suffer the suffocating consequences.  The boys work up a fair old sweat doing their stuff in this hour, so pity them generously.  It’s a tough gig.  Drinks lots of fluids, preferably alcoholic ones.  They help. If you like things of the ilk of ‘Cirque du Soleil’, and other such vacuous circus-type divertissements, you will most assuredly delight in this.  It is quite jolly.  No bits are on show, just a fair number of perfectly formed glutes and quads and abdominals and what have you.  Yes, it’s really like being down the gym with dance routines and a lighting plot.  Every now and then there is a whisper of ‘style’ or even, dare I say it, ‘narrative’?  Poses are struck, and broken, and struck, and broken, and struck, and broken, and somehow, some way or another, maybe it all amounts to more than a hill of magic beans, but… does it?
Does it matter?  If you want drama, you can go to the theatre.  If you want the circus, you can go to … the circus.  If you want Briefs, then you shall receive them…. and in abundance!  See them soon, before all the injuries kick in.