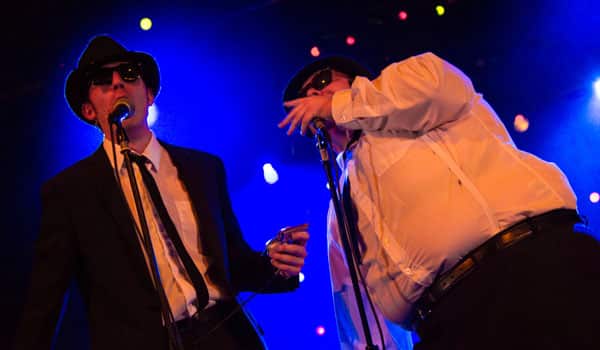 Ladies and gentlemen the joint is jumpin’.

The Blues Brothers: Xmas Special has come to town bringing the soul back into Christmas at the Arts Theatre in London from the 4th December throughout the holiday period until 10th January. It’s been 5 years since the last time this production was in town and Blues Brothers’ fans from all over the country will be shouting ‘Hallelujah’.

Even those who are not die hard fans will appreciate this show. From the moment the band take their places until the final chord of the 2nd encore, the energy level generated by the performance is phenomenal. There were many references to the extensive history of Blues Brothers’ but not knowing all of that background information does little to distract from a programme of well known classics.

A highlight among many is ‘I’m a King Bee’. This quirky song epitomizes their style which is rooted in the music. With the richness of the band at the heart, backing vocals and excellent lead vocals sing quirky lyrics with panache. Whilst in this song, the Blues Brothers sport a bee costume and everyone dances up a storm.

The Brothers themselves are wonderful. David Kristopher-Brown sings the role of ‘Joliet’ Jake Blues and never misses a note. His brother in blues, Elwood, is played by Joshua Mumby, who also directed and is appearing in his West End debut. His performance is memorable for his versatility and physical prowess. Kristopher-Brown and Mumby have played these roles together at times since a production in the Lowry theatre in 2012 and a successful Edinburgh Fringe Festival season. Familiarity shows in a fine connection between the pair.

The award for versatility of character goes to Simon Ray-Harvey. He appears first as Ray with a dynamic rendition of the signature song ‘Shake Your Tail Feather’, sings and dances up a storm with ‘Minnie the Moocher’ as Curtis and also makes a wonderful reverend with the heavenly choir backing him. All of this and charisma as well. 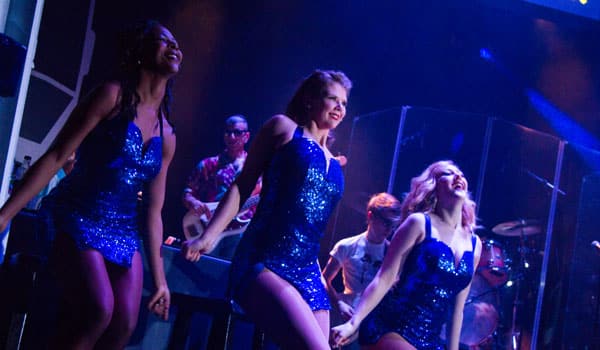 There are several opportunities in the show that move the Stass Sisters from the backline to the front and they are fabulous. ‘Think’ and ‘R-e-s-p-e-c-t’ both feature the winning vocals of T’Shan Williams and she sparkles in the spotlight. Other numbers that feature all the girls thankfully, because Hannah Kee and Sasi Strallen deserve to be heard as well. In a show where the dance element is so strong it was surprising that one of these numbers gets a little untidy when the ladies share a single standing microphone.

Of course the band is fundamental to the success of any production of this type. Maestro James Robert Ball leads from the keyboards where he proves himself a force and he has combined his band into a very effective unit. All instruments are featured in solos and Wesley Frankel on the saxophone deserves special mention.

There are few negatives in the show. There were times when the sound wasn’t supporting the performances to maximum effect. Some instruments were lost in the mix, some of the backing vocals were unbalanced and some solo sections were picked up late. There is time for these minor inconsistencies to be fixed. The lighting on the other hand was well designed and executed.

This is a Xmas Special that doesn’t hammer home the same old Christmas songs ad nauseam. Instead it gives Blues Brothers enthusiasts plenty of the music they know and love and rounds out the show with a treatment of a smattering of Christmas songs in their own inimitable style.

See this show in a mood to get carried away in the moment and joy of the phenomenon that is The Blues Brothers.

Having lived in Australia since childhood, Christine returned to the UK this year to perform in the Edinburgh Fringe Festival and decided to stay. She has been active in theatrical life for many years, working both onstage and as a director, choreographer and vocal coach. Christine has taught Performing Arts in schools for the last 20 years, specialising in creating large scale productions, and in directing choirs. She counts an annual concert of 600 voices as her favourite day of the year. She is excited to be exploring the enormous breadth and depth of British theatre and anything new that her life here will offer.