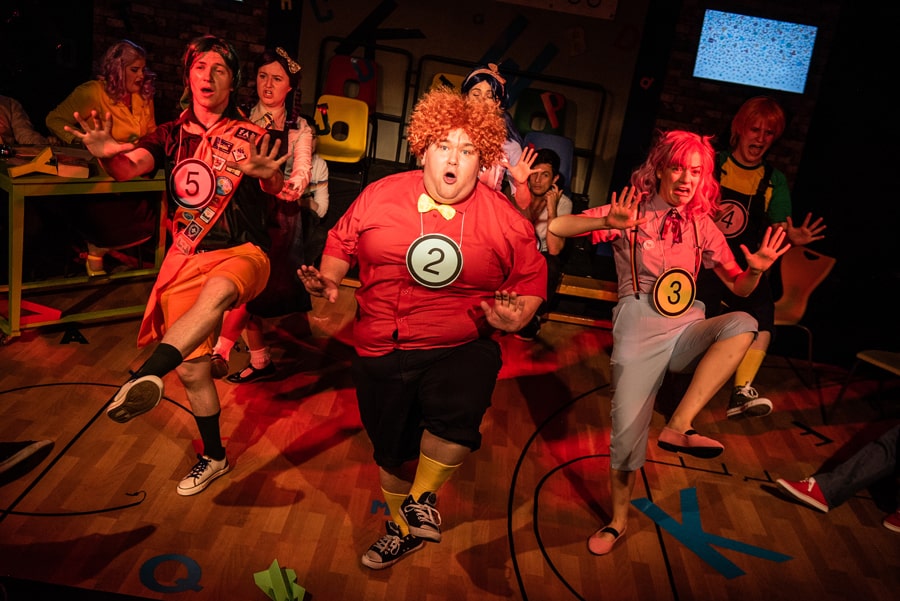 The big new thing is here, and his name is Adam Haigh.  For the first time, this young and definitely up-coming talent is combining his gifts as director and choreographer, and staging the whole of this magnificently fresh and exuberant musical about a local school spelling competition, and the result is a total knock-out.  From the very first appearance in the doorway to the auditorium of splendidly attired Elizabeth Chadwick (as the bossy but lovable teacher keeping control of the event, Rona Lisa Perretti), and the heaving melee of kids in garishly exaggerated togs (costumes are not credited, but the stage design is by Victoria Francis), all the way through to the last rousing chorus, Haigh makes you believe you are watching a big show in a big theatre. 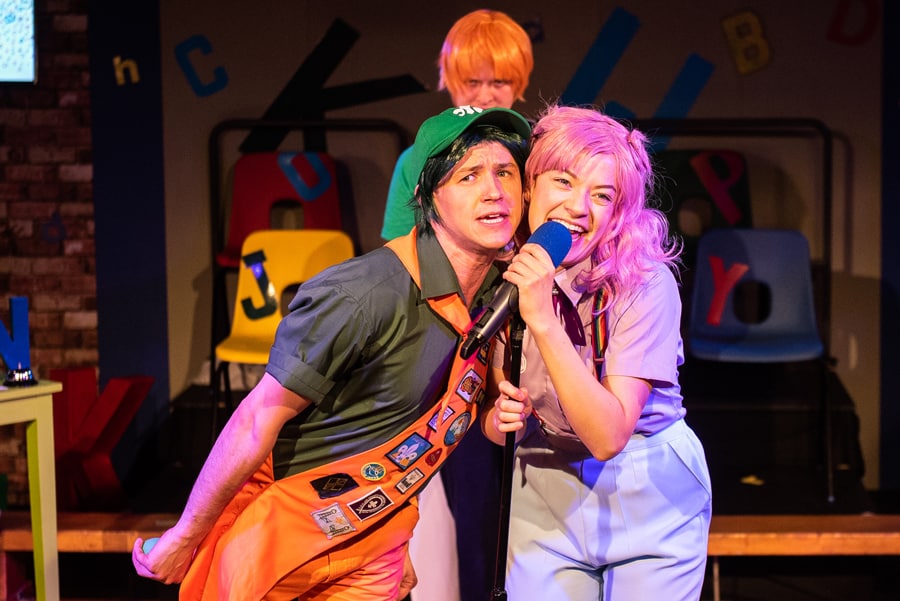 He is blessed, of course, in having at his disposal the wonderful MKEC Productions – the resident company at this fringe venue, and brainchild of Chadwick and Marc Kelly – who, with this stunning step-up in their development as an independent producers of thoughtful revivals of relatively recent works, seem to have decided to embrace their ‘coming of age’: there is not a department in this show that fails to deliver the highest standards, and the combination of all this excellent work is irresistible. 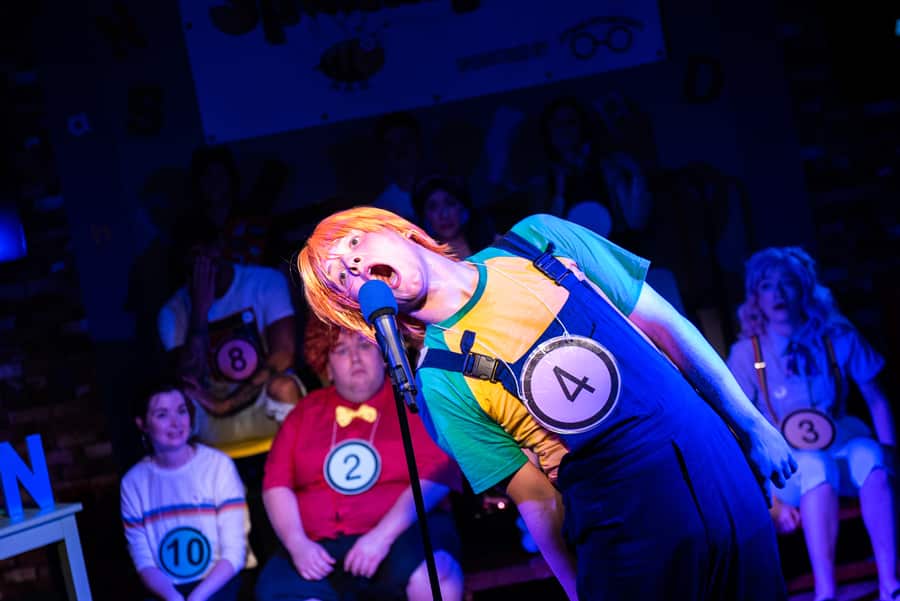 Of all the brilliant choices that lie behind this success, possibly the most glittering of all is the perfect casting.  400 applicants put themselves forward for this production, and of those 70 were seen in auditions.  What we have here is not only the pick of that crop, but a team that could hardly be better balanced and more integrated if it tried.  Douglas Panch is the other teacher (Michael Watson-Gray), who with Chadwick keeps the evening sparking along with clever repartee – and lots of bang-up-to-the-minute topical references and jokes.  And Chadwick I have never heard in such fine voice before: she is a joy.  The show was first done in 2005, still quite fresh in our minds, and nothing about its simple premise has dated, yet those clever little throw-away points are much needed to maintain the brightness of its shine. 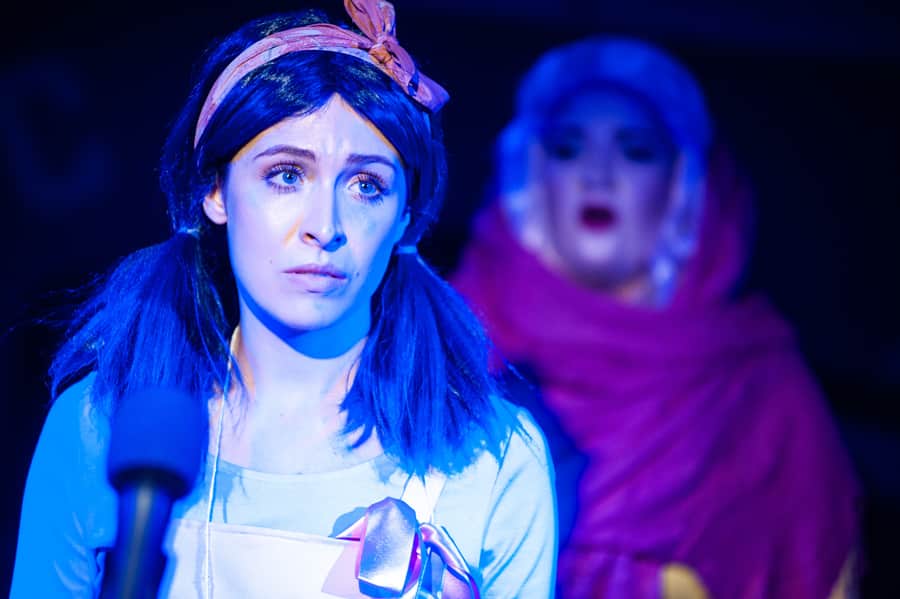 And why?  Well, not least because within the first few minutes of the show starting – with the first of songwriter William Finn’s many ingeniously composed and elegantly phrased numbers – four members of the audience are hauled up on stage to flesh out the ranks of the child competitors: and – be apprised – some of these have to remain on stage for a considerable length of time, joining in with musical numbers, dialogue and – naturally – the rigours of the competition.  This is clearly done to fuse the experience of what is happening on the stage with our own individual destinies in the here and now of today: it is absolutely not about getting cheap laughs at the expense of the public.  The audience loves this, and rewards every smidgin of participation with riotous applause.  A further ‘adult’ role is the fine baritone of Inti Conde as the louche caretaker, currently doing his rehabilitation, and helping to manage proceedings staged in the school gymnasium. 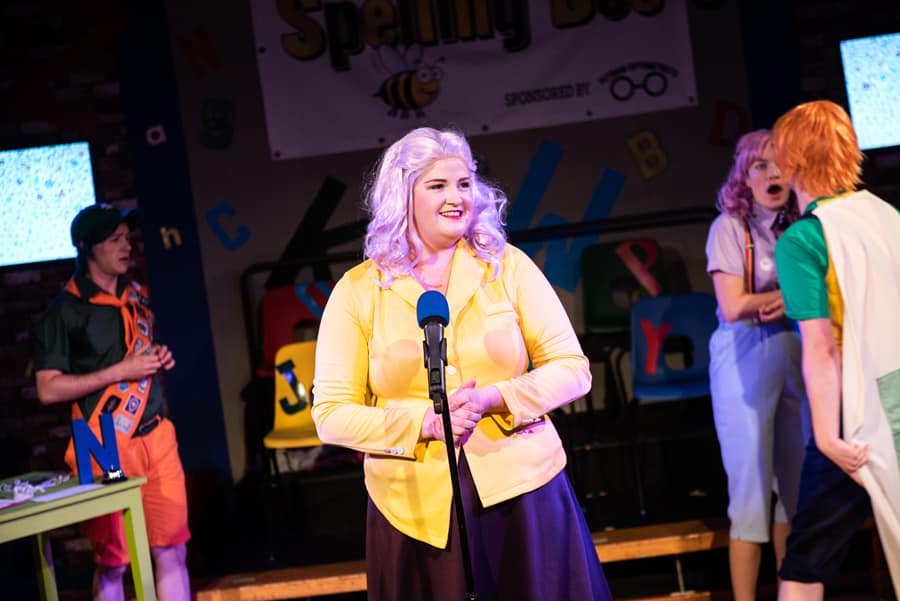 In suitably festive mood, then, we launch into the lives of the children: Aaron Jenson is Chip Tolentino, the former winner, trying to regain his crown; Lottie Johnson is the slightly speech-impedimented Logainne Schwartzandgrubenniere (if somebody wants to go and check whether these names actually exist, then they will give a whole new meaning to the word, anorak); the good boy-scout of the gang is Danny Whelan’s Leaf Coneybear; and the heroic tenor of T J Lloyd rings out loud and true as the eccentric William Barfee; Jeannie May makes a sternly authoritative Marcy Park; and, Thea Jo Wolfe is the eternally compromised Olive Ostrovsky.  All of these warriors in the battlefields of youth have about them more or less ‘interesting’ baggage that marks them out from the secure conventions of the past, and makes them into trailblazers for the 21st century, where all manner of differences and alternatives to the old norms of society are made the peculiar defining characteristics through which we get to know them.  The show, the competition upon which they are embarked, therefore, is not so much about whether they can spell words correctly, but whether they can live their lives.  Thus does a silly, throw-away line (surely an interpolation), ‘Did you ever see a gym above a pub before?’, actually resonate rather powerfully, reminding us that this is about so much more than what it’s nominally about. 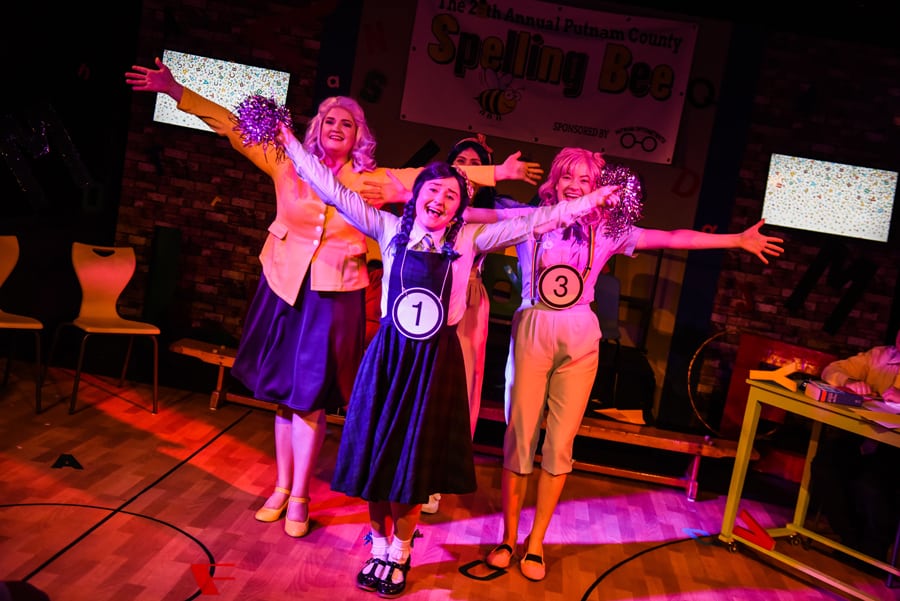 Keeping all the music – and what splendid music it is – on an even keel is the sterling presence of MD Kieran Stallard, who does everything in his power to convince us that his little electric piano is in fact a generously proportioned band.  The individual numbers all ‘land’ deliciously, and the ensemble sings its many harmonies with stunning command and relish.  Andy Hill is credited as ‘technical manager’, which means – surely – the superb lighting is his work.  There is not, as far as I could tell, and even though a microphone does get used as a significant prop, amplification of any voices.   J Mark Pim provides the videos that get shown on a couple of TV screens.  And all these names are to be commended for what they do.  But the overall credit here has to go to the superb choice of director-choreographer who, we feel quite sure, is with this production taking the first step on what could well be a long and terrific career in that new role.

So get booking now: this is not one to miss.