Petula Clarke and Joseph Millson are to join Zizi Strallen and Charlie Stemp in the West End revival of Mary Poppins the musical at the Prince Edward Theatre. 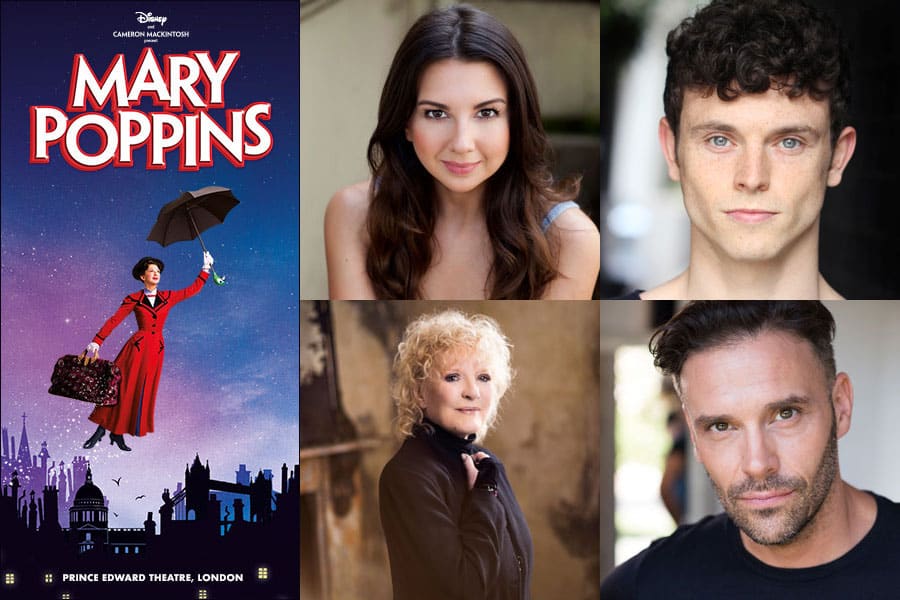 Cameron Mackintosh and Disney are delighted to announce that Petula Clark and Joseph Millson will join the Company to play the Bird Woman and George Banks in the new production of Mary Poppins, which returns to its original West End home at the Prince Edward Theatre from 23 October 2019.  They join the previously announced Zizi Strallen in the title role and Charlie Stemp as Bert.

Fifteen years after the world’s favourite Nanny landed at London’s Prince Edward Theatre she’s back. Brilliantly adapted from the wonderful stories by P L Travers and the original Walt Disney film, the stage adaptation of Mary Poppins continues to be a smash hit around the world.

Petula Clark became a star in the UK at nine years old singing for the troops stationed in England during World War II.  Many years later she moved to France and soon became an European star recording in English, French, Italian, German and Spanish.  While still living in Paris, English songwriter Tony Hatch presented her with his new composition, Downtown, which became a worldwide hit and led to a string of top ten records, winning her two Grammy awards and making her an international star.  She later met with Charlie Chaplin who penned one of her further major hits This Is My Song.  She has performed in her own TV shows in the UK, the US and France and has starred in the iconic films Finian’s Rainbow with Fred Astaire and Goodbye Mr. Chipswith Peter O’Toole.  She has been seen on stage in West End and on Broadway, and has just finished a triumphant US tour.  During her extensive career spanning eight decades she sold over 70 million records.  Clark was made a Commander of the Order of the British Empire in 1998 and was installed as a Commander of the Ordre des Arts et des Lettres on France in 2012.

Joseph Millson’s extensive theatre credits include Apologia at Trafalgar Studios, The Rover for the Royal Shakespeare Company for which he won the Best Performance in a Play Award at the 2017 UK Theatre Awards, Mr Foote’s Other Leg at the Theatre Royal Haymarket, Macbeth at Shakespeare’s Globe, Much Ado About Nothing, King John and the Spanish Golden Age Season for the RSC/West End, Rocket to the Moon, Pillars of the Community and Every Good Boy Deserves Favour for the National Theatre, Love Never Dies at the Adelphi Theatre for which he won the WhatsOnStage Award for Best Supporting Actor in a Musical and The Priory for the Royal Court Theatre. His more recent television work includes Catch 22, Grantchester, Ransom,Banished, 24 Live Another Day, as well as regular roles in The Last Kingdom, Campus, Holby City and The Sarah Jane Adventures.  His film credits include Casino Royale, I Give It A Year, All The Devils Men, Dragonheart Vengeance, Angel Has Fallen, No Vacancies, Burning Men, Tango One, The Dead 2 and Devil’s Bridge.

The original music and lyrics by Richard M. Sherman and Robert B. Sherman include the classic songs Jolly Holiday, Step in Time, Feed the Birds and Supercalifragilisticexpialidocious.  New songs and additional music are by the Olivier award-winning British team of George Stiles and Anthony Drewe.

Book is by Academy Award®-winning screenwriter and Downton Abbey creator, Julian Fellowes and this production is co-created by Cameron Mackintosh.  The producer for Disney Theatrical Productions isThomas Schumacher.