We are pleased to bring you these great first look production photographs by Brinkhoff and Migenburg of the new cast of Mamma Mia! who began performances on 12 June 2017. 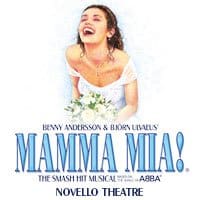 Nearly 8 million people have now seen the London production of Mamma Mia! breaking box office  records at the Prince Edward Theatre, the Prince Of Wales Theatre and now at the Novello Theatre.

BOOK NOW FOR MAMMA MIA! AT THE NOVELLO THEATRE