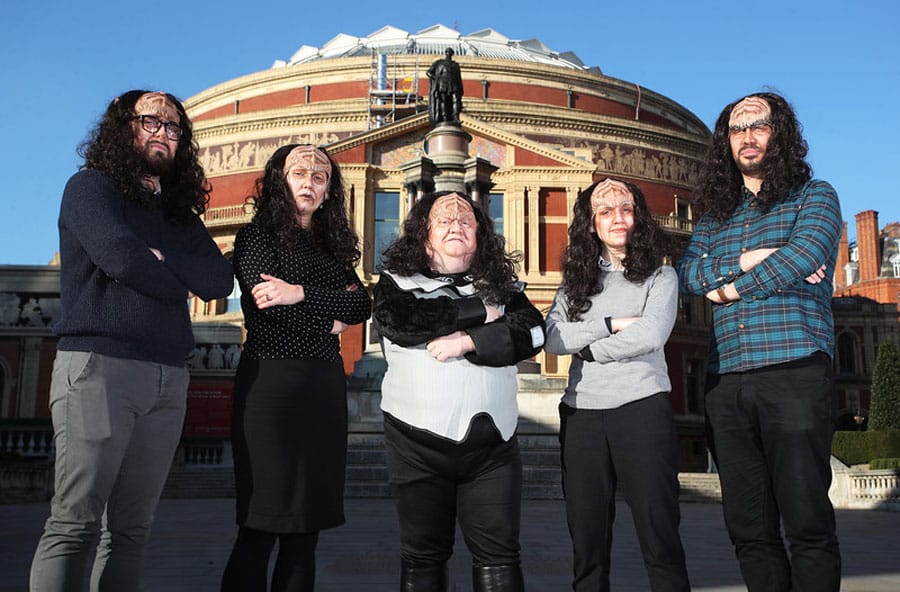 Employees were asked to take classes in the ‘language’ after the Hall announced it would give two free tickets to anyone ordering in Klingon.

The Royal Albert Hall called in one of the world’s foremost experts in Klingon, Alex Greene, to help the team master the warrior language.

Lucy Noble, Artistic Director at the Royal Albert Hall, said: “Star Trek is a timeless classic with a huge cult following. We wanted to celebrate it and reward real Trekkies with this opportunity to win free tickets for those booking in Klingon.

“I think the Box Office probably thought I was joking when we asked them to take Klingon lessons. But now they are chatting regularly in Klingon, I think they realise it’s an essential life skill that all should learn.”

*(“These simple humans with their smooth foreheads will never fully master my complex language, but I’m happy to help them learn enough to run their silly project.”)

Mr Greene, from North Wales, is a lifelong Trekker and started learning Klingon in 1986. It took him a year to master the intricate, guttural pronunciations, but he hopes his work and the ‘Star Trek In Concert’ events might “inspire a few more humans to learn Klingon.”

The ‘Films in Concert’ screenings of ‘Star Trek’ and ‘Star Trek Beyond’ are two of the centrepiece events in the Royal Albert Hall’s much anticipated Festival of Science Series, which will be running in May and June 2018.

Audiences to the Star Trek weekend in June will see the 2009 and 2016 reboots of this legendary franchise played out on the big screen. The epic scores will be performed live by the Royal Philharmonic Concert Orchestra, conducted by Ernst Van Tiel.

The soaring and action-packed orchestral score for both performances was written by Oscar®-winning composer, Michael Giacchino. With a set of all new themes, but also reprising the beloved title melody from the TV series by Alexander Courage – the music does not just break new ground, but also captures and advances the musical universe of Star Trek.

To enter, simply call the Royal Albert Hall Klingon Box Office on 020 7959 0597, order your tickets in Klingon, but leave your name and phone number in English to be in with a chance of winning free tickets to ‘Star Trek – In Concert’. The first 10 people to book in Klingon will win two tickets each.

For more information and to book tickets, please call 020 7959 0597 or visit www.royalalberthall.com

Star Trek Beyond – In Concert