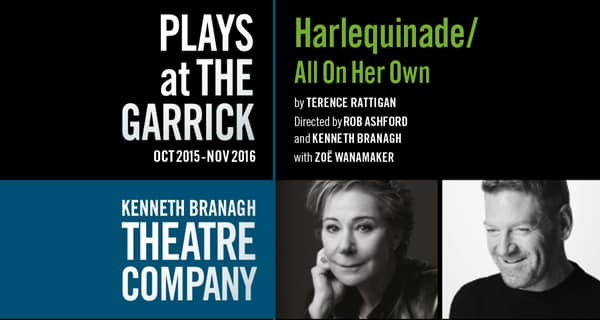 It has been announced today that Zoë Wanamaker will join the cast of Harlequinade alongside John Dalgleish when the play is performed by the Kenneth Branagh Theatre Company as part of its Plays At The Garrick Season.

Wanamaker will take on the role of Dame Maud In Harelquinade. In addition she will perform Terence Rattigan’s dramatic monologue All On Her Own, which has never been seen in the West End as a double bill with Harlequinade.

Fresh from his award-winning performance in Sunny Afternoon, John Dalgleish will join the casts of both Harlequinade and The Winter’s Tale.

Kenneth Branagh said: “Zoë Wanamaker is a brilliant comedienne and a great tragic actress too. In joining us for the Rattigan comedy we seized on the opportunity to let her show us the dramatic side of a playwright also known as ‘the English Chekhov’. The rarely seen All On Her Own provides a fabulous woman’s role, and makes for an intriguingly balanced double bill. John Dagleish’s brilliant musicality was sensational in Sunny Afternoon. I’m very excited to hear what he and our superb composer Patrick Doyle, bring to the music of Shakespeare’s great con man, Autolycus, in The Winter’s Tale.”

The season of plays at the Garrick has become one of the West End’s hottest tickets with some productions nearing sell out.

BOOK TICKETS FOR THE PLAYS AT THE GARRICK SEASON.