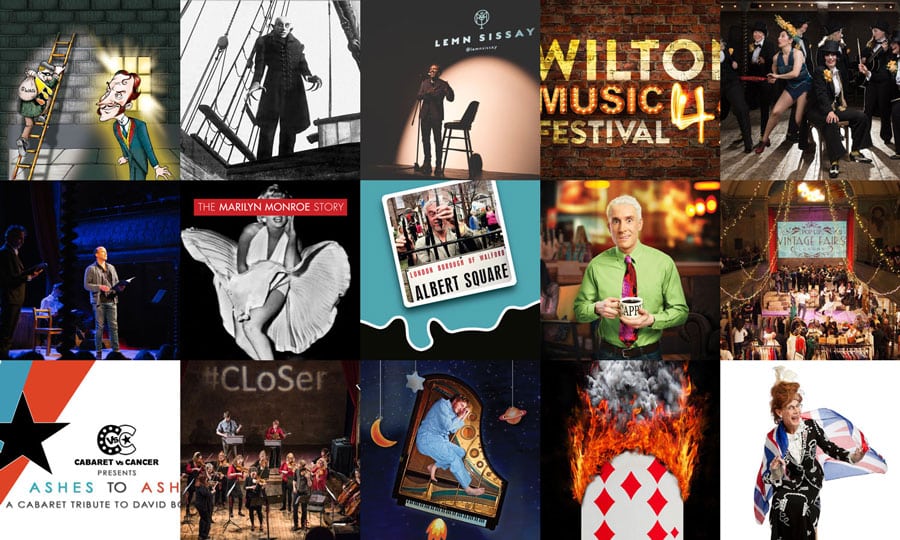 The oldest grand music hall in the world goes back to its roots to host the inaugural Music 4all Festival (11 – 16 May), inviting the best emerging artists from across five music genres to showcase their talents on one of the most iconic stages in London. Mentored by industry professionals, emerging stars from the worlds of Opera; Contemporary & Jazz; Rock, Pop & Indie; Cabaret & Alternative; and Urban, Electronic & DJ will perform over five nights in a musical extravaganza, the first of its kind in the history of Wilton’s. A Charity Gala Night on 13 May will see one of the best live bands in the country, an extra-special musical band and a Wilton’s favourite come together for one amazing night of music .

With music now firmly back in the heart of Wilton’s, City of London Sinfonia present I’m A Rock ‘n’ Roll Star (20 – 23 May), paying homage to the original rock ‘n’ roll stars Mozart and Vivaldi, who headlined concerts in the biggest party venues across Europe and led lives as chaotic and incident-filled as any modern-day rock star. Bringing the sounds of these classical music legends into the exhilarating and intimate atmosphere they would have known in their own day, the orchestra and guest pianist Robert Levin and Norwegian violinist Terje Tonnesen truly recapture the party spirit.

Theatre returns to Wilton’s as the London premiere of acclaimed show FRIEND (The One With Gunther) (1 – 6 June) arrives following its smash-hit Edinburgh run. Comic actor Brendan Murphy reimagines the TV classic Friends through the eyes of everyone’s favourite blonde barista, before James Holmes returns with his sell-out Camden Festival hit EastEndless (26 – 27 June), taking a darkly comic look at the classic soap opera from the perspective of superfan Tony Coventry.

Following two previous sell-out shows, Dead Poets Live returns to Wilton’s led by theatre legend Rory Kinnear from 24 – 25 June for two nights of great poetry, performance and surprises, whilst music and storytelling combine for the wonderful OneTrackMinds (8 – 9 July) as another vibrant selection of writers, thinkers and musicians each present the one song that changed their life, and the thought-provoking story behind it.

It’s anarchic and surreal satire at its finest with Horse Country (30 June – 4 July), presented by Flying Bridge Theatre and Rive Productions and directed by Mark Bell (The Play That Goes Wrong, The Comedy About A Bank Robbery). The show follows Sam and Bob, two clowns hunting the elusive nine of diamonds, talking capitalism to sea-lions and everything in between.

Divas assemble as The Cabaret House presents The Marilyn Monroe Story (15 July), a fascinating look at the icon’s life from beginning to tragic death through the performance of Jojo Desmond, professional singer, actress and dancer. Audiences will then be transported back to 1957 Cuba with Marlene in Havana (13 July), a Latin-infused night of cabaret inspired by Marlene Dietrich’s famous performances and led by opera singer Ann Liebeck and award-winning jazz tango violin virtuoso Omar Puente.

Everyone’s favourite music hall singer-turned rap star Ida Barr is back with her show Granarchist (7 July), bringing her brand of Artificial Hip Hop to the Hall, whilst Martin, Izzy and Friends (30 July) present their riotous evening of music wine and song and cabaret superstar Tricity Vogue and her joyous All Girl Swing Band will take to the Wilton’s stage (22 – 23 July) with their incredible mix of cheeky dance numbers, swing versions of retro pop classics and some original numbers thrown in. Carrying on the cabaret theme, the very best of the genre’s UK scene come together for Cabaret vs Cancer’s Ashes to Ashes (20 – 21 July), celebrating the one and only David Bowie with a show exploding with song, dance, comedy and burlesque in one glittering night, all for a good cause.

Wilton’s is going galactic with children’s theatre show First Piano on the Moon (3 – 5, 24 – 26 August), which tells the story of William, the little piano player with the big dreams who is chosen to represent the school at Mozart’s birthday celebrations in Salzburg. Acclaimed pianist Will Pickvance takes audiences on an engaging, playful and joyous journey about one boy’s flight of fantasy to the moon and back.

The ever-popular Lucky Dog Picturehouse are back with Kings of Silent Film (10 – 13 August), showcasing the very best of silent cinema accompanied with live music across four nights, presenting Steamboat Bill Jr., Battleship Potemkin, Safety Last! and Nosferatu in the atmospheric surroundings of the Hall.

Renowned opera company Opera della Luna present a brilliant ‘new’ comic opera The Burglar’s Opera (2 – 5 September), a reimagining of a production that premiered in 2008 to rave reviews and has now been specially staged for Wilton’s. Based on a short story by WS Gilbert, The Burglar’s Opera by Jeff Clarke and Stephen Wyatt is set to a sparkling score of music from Sullivan’s rarely heard orchestral works.

As well as the jam-packed programme of theatre and music at Wilton’s, visitors can also delve even deeper into its history with guided tours available throughout the season: the Guided Tour gives an unprecedented look into the heritage of the magnificent building; whilst the Film Tour shows off Wiltons’ cinematic past. Other events include the Pop-up Vintage Fair (16 July), bringing together vintage traders from across the UK for an evening of shopping, cocktails and live entertainment.

Wilton’s are also on the hunt for a small-medium theatre company to develop a production that is going to the 2020 Edinburgh Fringe. Applications are open until 1 May and the successful company will receive two weeks of free rehearsal time at Wilton’s, mentoring, and the opportunity to produce their work in one of Wilton’s spaces to an invited audience. Read more about the opportunity HERE.

Finally, in June Wilton’s will spend two weeks enhancing acoustics and seating of the Hall as part of the Beautiful Word campaign, which was launched by David Suchet CBE in 2019.