Wicked looks at what happened in the Land of Oz… but from a different angle.

Long before Dorothy arrives, there is another young woman, born with emerald-green skin-smart, fiery, misunderstood, and possessing an extraordinary talent. When she meets a bubbly blonde, their initial rivalry turns into the unlikeliest of friendships… until the world decides to call one “good,” and the other one “wicked.”

Hailed by The New York Times as “the defining musical of the decade.” Time Magazine cheers, “if every musical had the brain, the heart, and the courage of this show, Broadway really would be a magical place.”

The Gershwin Theatre on 50th Street and Broadway is that magical place. The untold true story of the Witches of Oz-transfixes audiences with its wildly inventive story. It will send your spirits soaring to heights you’ll never forget.

“Based on novelist Gregory Maguire’s 1995 adult variation on the Wizard of Oz mythology, Wicked provides a prequel to the children’s book and movie. The lavishly designed musical addresses complex themes, such as standards of beauty, individual morality and, believe it or not, opposing fascism. Thanks to Winnie Holzman’s witty book and composer-lyricist Stephen Schwartz’s robust and pop-inflected score, Wicked soars.”
Time Out New York 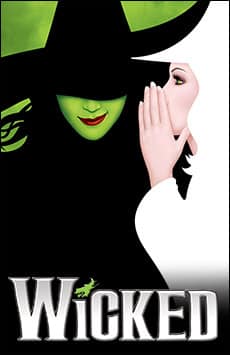