Sir Derek Jacobi, Sharon D Clarke and Stephen Fry among initial casting announced for the digital production of What A Carve Up! 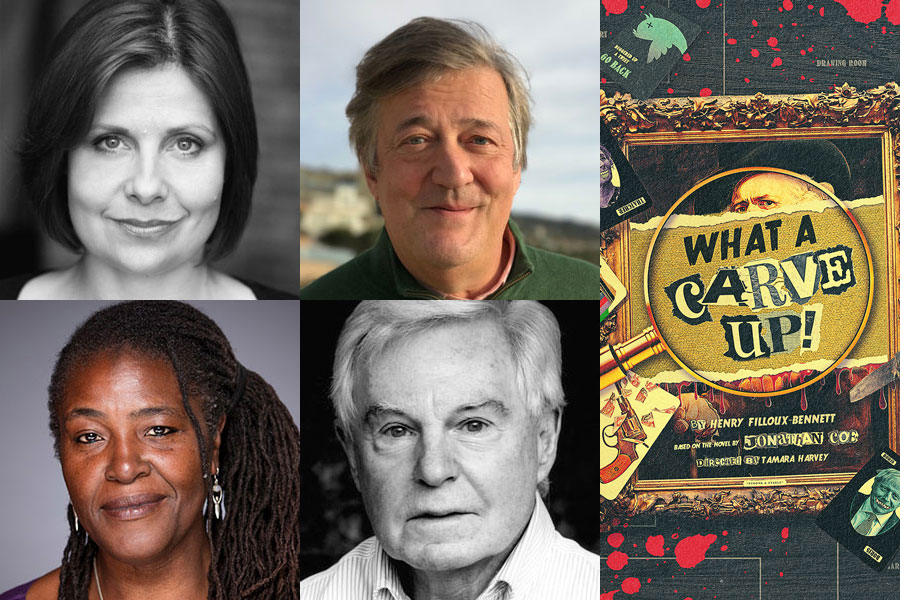 The Barn Theatre in Cirencester, the Lawrence Batley Theatre in Huddersfield and the New Wolsey Theatre in Ipswich have announced initial casting for the world premiere of Henry Filloux-Bennett’s online play What A Carve Up!, based on Jonathan Coe’s critically acclaimed satirical novel.

The digital production, directed by Tamara Harvey (Home, I’m Darling), chronicles the events leading up to the ‘Winshaw Murders’. Filled with murder, mayhem and madness, the murder mystery turns a satirical eye on what it is like to be a member of one of the most corrupt, powerful and toxic families in the country.

Tamara Harvey said of the announced casting, “There are some casts so dazzling that my job, as a director, is to not get in the way. This is one of them. My only sadness, of course, is that we don’t get to be in the rehearsal room together. But the fact that these brilliant actors have all agreed to create this piece to raise money for regional theatres is one of the ways we’re all still fighting to ensure that there will still be rehearsals rooms across the country, somewhere, somehow, in our future.”

The murder mystery is written by Henry Filloux-Bennett (Nigel Slater’s Toast), based on the award-winning novel by Jonathan Coe, and directed by Tamara Harvey (Home, I’m Darling). Produced by the Barn Theatre, Lawrence Batley Theatre and New Wolsey Theatre.

The play, which will be available internationally, will run from 31 October – 29 November 2020. Tickets can be purchased at whatacarveup.com with audience members receiving a screening link which will activate at their booked performance time for a 48-hour period. A premium option, consisting of a physical programme and pre-theatre dining recipe card, will be available for UK residents.

The recipe card included in the premium option will be curated by world-renowned chef Asma Khan. Owner of the prestigious Darjeeling Express in London’s Soho, Asma Khan was the first British chef to be profiled on Netflix’s award-winning documentary series Chef’s Table and in 2019 was named number one on Business Insider’s “100 Coolest People in Food and Drink” list.

Jonathan Coe said of the new adaptation, “I’m thrilled that What a Carve Up! is being brought to the stage by such a talented and experienced team. It’s twenty-five years since I wrote the book but unfortunately, its political satire seems as relevant as ever – I’m sure the new adaptation will capture that, as well as the novel’s sense of fun and irreverence. I’m looking forward to getting to know it again!”

A portion of the proceeds raised by What A Carve Up! will be donated to a freelance fund to support the creative workforce that the theatres would not be able to survive without.

Further casting and creative announcements will be released at a later date.

BOOK YOUR STREAMING PASS FOR WHAT A CARVE UP