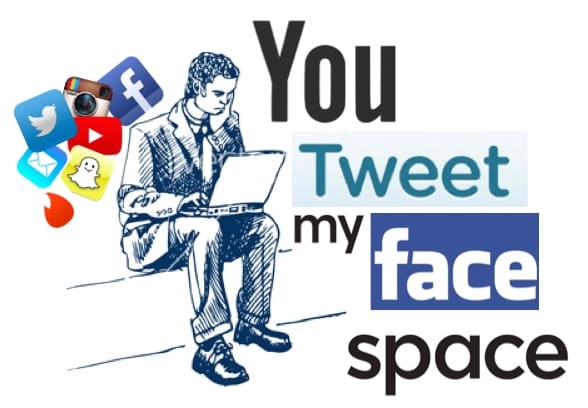 This week Julian paid a visit to the London Theatre Workshop to take a look at You Tweet My Face Space.

Once again, LTW hosts another outstanding event: this time, a Pre-Edinburgh Fringe preview of an original new comedy, written and produced by Tom Hartwell and directed by Lilac Yosiphon, starring ten recent graduates of Mountview Academy (BA Acting). The company they invited in, Boots and Cats Productions, is partnered to them and they have worked closely together in creating this preview. Ray Rackham and Skye Crawford’s LTW has just scored an immense hit with its scaled up transfer to the Southwark Playhouse of last summer’s success at Eel Brook Common, ‘Through The Mill‘. Now in the process of transferring itself to new and larger premises atop the New Moon pub at Leadenhall Market in The City, it is continuing to make a name for itself in finding new talent and developing it alongside the best in the business: I attended their new place a few weeks ago to spend an afternoon in the company of no less a personage than Jeremy Sams, in a masterclass exploration of Acting Through Sondheim Songs with a choice selection of young performers. So, when LTW says a company is worth giving space to under its roof, I think we need to pay attention. 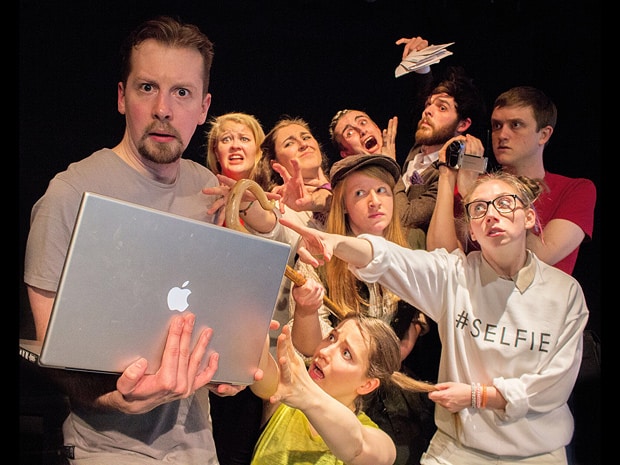 The set-up in ‘You Tweet My Face Space’ is simple, and beautifully realised. Our hero, David (Hartwell), is distracted from his girlfriend Charlotte (Megan King), by his addiction to social media; she insists he break his intrusive dependency and he tries to comply… at which point, the cyber-world fights back.

David and Charlotte are then visited by a surreal succession of human incarnations of the online world, who all in their various ways try to persuade, coax, cajole or threaten David to stay ‘tuned in’. We begin with the mephistophelean seducer that is Facebook (Evan Rees – a brilliant comic actor), oleaginous in charm and psychotic in persistence, closely followed by a succession of others: the constantly posing for selfies Instagram (Elizabeth Stretton); the smugly aptronymic bearded Hotmail (Hadley Smith); the wannabe film director Youtube (Matthew Gilman); the never present for longer than 10 seconds Snapchat (Isabel Patterson); the ueber-rustic Farmville (Katie Dalzell); and – most terrifyingly – the Russ Meyer throwback man-eating Tinder (Melanie Ebanks). Oh, yes: and then there’s Matt (Conor Cook), who is a ‘real’ friend. Apparently.

Hartwell has fun in arranging their increasingly complicated and convoluted, often mutually exclusive and competitive, machinations in a kind of morality fable de nos jours, a kind of Pilgrim’s Progress through the quicksands and swamps of social media. Yosiphon paces everything with admirable poise, giving heroic status to her elegantly managed ensembles. This is a director with some considerable flair, who only needs an interesting lighting plot (the work of all hands) to make magic occur (she also has another show opening next week at The Space, Docklands: and as it happens, ‘untranslatable’ is also an exploration of love in the age of online mediatisation of relationships). There’s some smart sound design in the earlier stages of this show; but once the frenzy of the social media whirl is set in motion, the cacophony of its many voices is all that is needed to make its effects land home with ever greater power. There are a lot of modern-day truths told in this story; and – if we have heard them before – I don’t think we’ve ever seen them so artfully played out as we do in this expressionistic cavalcade of internet-horrors. If Elmer Rice were writing ‘The Adding Machine’ today (his 1923 drama of the destiny of man in a soulless industrial machine world is about to resurface as a musical at The Finborough), he would be writing like Tom Hartwell.

The 55-minute caper is shaped with virtuosic delight and makes for a cogent and delicious journey, completely satisfying in its own right. Following another preview at Theatre 503, this will next appear in a jumbo-sized rendition in Imperial College’s Great Hall to an audience of 6oo from one of the company’s partnered organizations, the Foundation for International Education; Boots and Cats’ other partners include Mountview and Hawkins Forensic Investigations. Hartwell knows how to gather the right friends around him to make his work flourish. And flourish it will: this wonderful outfit is headed up to Edinburgh to be resident at Greenside on the Royal Terrace as their 3 o’clock matinee nearly every day between 5th and 27th August. A further life beyond that date is eagerly hoped for. Several significant players in the theatre world are already interested in the work of this company, and – after seeing in tonight – I can fully understand why.

Having begun its existence three long years ago as nothing more than a sketch, by last summer it had grown to show-length and was well received on the Camden Fringe. Now, with a much expanded conclusion, incorporating several ingenious twists, and a few cast changes, Hartwell has crafted a play that is clearly taking him into an altogether more sophisticated and craftsmanlike area. Yosiphon and this excellent company are his dream companions on that journey. Quite where it will take them all next, who knows. But – if you are in Edinburgh this summer – this is one show I lay odds-on to reap several prizes.

Get more information about Tom Hartwell

BOOK TICKETS FOR YOU TWEET MY FACE SPACE IN EDINBURGH