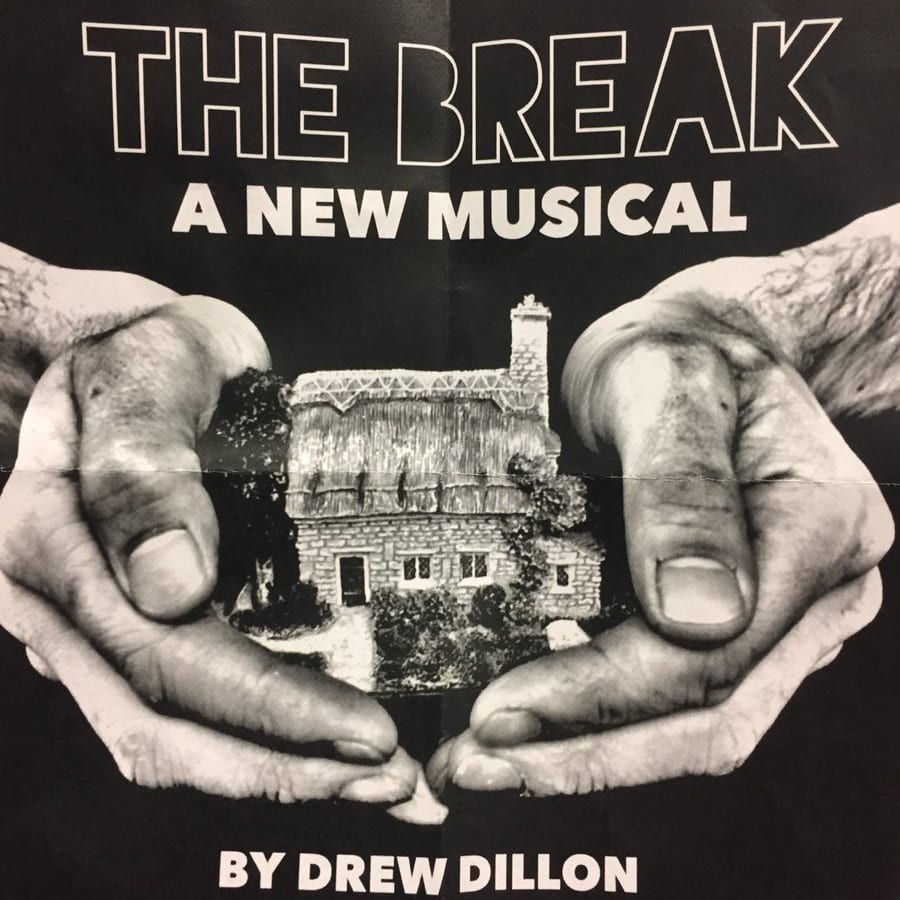 Seen in a rehearsed reading on the set of the current main house production, ‘The Toxic Avenger’, Katy Lipson’s Aria Entertainments presented a bigger outing than usual for this script sent to her during the last submissions round for the ‘From Page To Stage’.  And, indeed, unlike most of the works making it through to that festival, this work is more complete, more finished, and ready to be tested on a full stage, seen as a stand-alone piece and not as part of a wider, more varied programme.

It is a full-length musical play, set in Northern Ireland and focused on the tribulations of an ordinary family, one exhibiting characteristics often understood to be typical of Irish domestic situations: a bullish but sentimental father; a meek, rather passive mother; a rebellious, iconoclastic son; a passionate, determined daughter.  There is one outsider here, the son gets the accessorisation of a ‘friend’, and in a novel move – a nod to contemporaneity, perhaps – the friend is male and also a lover.  But, the further we get into their tale, we notice another salient feature: although emanating from the land of sectarianism, this Irish story doesn’t seem to identify the religious affiliation of the figures we meet, or – if it does – then it doesn’t make that a central feature of their history.  Instead, in a rather freely configured succession of small scenes, we move through a turbulent period in their emotional lives, where the hurdles they have to cross are more of their own making than imposed upon them from outside.   It’s an intriguing and unusual approach to story-telling in musical theatre and one which makes for a fascinating project for development.  Brilliantly brought together in no time at all by Bronagh Lagan, with orchestrations and arrangements and musical direction by Matthew Reeve (who is a long-term collaborator with Dillon in these departments, and works in beautiful harmony with the writer’s aims and sensibility), lit simply by Nic Farman, and with Charles Parry’s well-balanced sound design, it was given a secure and convincing reading.

That said, the greatest discovery it reveals to us is surely in the songwriting talents of the author of the book, the music and the lyrics, Drew Dillon, a name familiar to us already through his acting roles in successful West End shows like ‘Warhorse’ and ‘The Play That Goes Wrong’.  Here, he demonstrates the fruits of a newer skill, yet also a talent he began to work on as a teenager, in crafting songs.  As a songwriter, he shows himself to be among the very best talents working in the country at the moment: his songs have immediate, powerful appeal.  Boldly characterised, strongly rhythmic, elegantly melodic, with a mature, complex voice in the content and style of the lyrics, he is a writer who will surely be much in demand by the best performing and recording artists.

The cast here can thank their stars for getting his material into their rep folders.  Lewis Cornay drives much of the action as the dynamic son, Ben, and enchants with his fine lyrical tenor, making much of his scenes with his love interest, Edd Campbell Bird’s attractive and dramatically credible Nick.  Tensions flare often between Ben and his sister, Katie, taken by the elfin and angular presence of Caroline Kay, who drew out a sensitively observed reading of the role and its many moods.  As the parents, the grumpy patriarch, Patrick, was given believability by the experienced hands of Cornelius Clarke, and admirable statue too in a wonderful vocal performance.  The show, however, seems to reserve the finest moments for the mother, Louise, who, despite protestations to the contrary, seems the toughest and most resilient character of the lot, and thanks to Shona White’s expertly crafted expression moved all hearts, as well as minds, with her extraordinary lovely interventions.

It is anybody’s guess where this show might go next: there are certainly a lot of people interested in it.  But I can tell you that Dillon has only just begun to speak to us through this medium: he is currently at work on two other shows, as entirely different in outlook and form from each other as they are from this, heavily autobiographical, first utterance.  What a joy it was for us to be able to be present at the launch of such a promising career.  Keep watching out for its future growth: you will see – and hear – wonders.

(No stars are awarded for works in progress.)