H G Wells could see into the future, and he gave us his alter ego – the ebullient draper’s boy, Kipps, who is even now, thanks to the combined efforts of Anthony Drewe, George Stiles and Julian Fellowes, dazzling his way back onto the Chichester Festival Theatre stage in the most recently refreshed version of the 1960s musical based on his adventures, David Henecker and Beverley Cross’s ‘Half A Sixpence’. But perhaps even Wells’ clairvoyance might have fallen short of grasping just what a powerful role the British fascination with trade would play in its musical theatre creations of the early 21st century.

Two shows seen earlier in London (and now entertaining the crowds in Edinburgh), and another housed in a temporary space in the capital, open our eyes and ears to the powerful influence that commercial life still exerts upon national life. First, in ‘Tomorrow, Maybe‘, we pop into a high street cafe, before making our way to ‘Paper Hearts‘ in a book shop, and finally stocking up on the necessaries in Sainsbury’s and an allotment market in ‘Rise‘.

‘Tomorrow, Maybe’ as it stands today is the result of just two years labour by the extremely talented partnership of Stephanie Amies (composer-lyricist-scriptwriter) and Teddy Clements (composer-arranger-MD), and has been growing as it has moved from early workshops, through two runs of site-specific performances at a Romsey cafe, then being developed into a full-length show, and next condensed to fit an Edinburgh Fringe performance slot: it was in that form I saw it at the Clapham Omnibus arts centre. According to the writers, the show, ‘focuses on snapshots of the people we cross paths with every day: from a Sicilian woman who fails to connect with the world around her, to a homeless man and his powerful tale of hope, the show questions how much we can really know about those around us.’

In these snapshots the presence of Jason Robert Brown looms large to infuse the beautifully crafted score with a similar sensibility, illuminating the vignettes featuring the transient characters of the show with lush, seductive music. The lyrics are light and precise and perfectly fit the musical expression. In this wonderful production by Kevin Jones and Rebecca Bailey, the succession of musical numbers, interwoven with a little dialogue, produces an effect that is hugely charming and endearing. 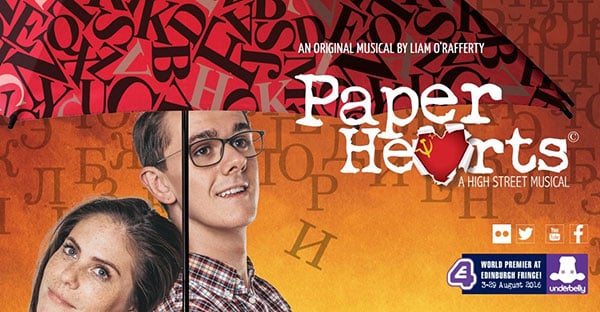 More narratively complex are the events of ‘Paper Hearts‘. Seen at the ever-inventive Waterloo East Theatre, before moving to Scotland, this work has come an entirely different route. The book, music and lyrics are the brainchild of Liam O’Rafferty, but they have really come to life in the creative team formed of director-dramaturg Tania Azevedo and musical director Dan Jarvis, with choreography by Lindsay McAllister and clever design by Anna Driftmier.

Here, two stories are offered to us: the ‘real’ story of the bookshop threatened with closure, and the ‘fictional’ tale of revolutionary Soviet Russia that is the milieu of a novel being written by the hero. Ingeniously, the cast of actor-musicians switch backwards and forwards between these two worlds. The songs are strongly appealing, with powerful melodic hooks and neatly turned lyrics: it is great to discover the considerable talent that O’Rafferty brings to the production, and to share in his vision of what musical theatre can do; it is remarkable that he has found such sympathetic collaborators in this production’s creative team.

Finally, the Old Vic Theatre’s Community Company programme this summer boasts the culmination of three years of sustained social engagement in the magnificently epic ‘Rise‘, playing in a purpose-built temporary theatre on Waterloo Green. Here, the myriad lives of dozens of Londoners are brought together in the spaces where they often do criss-cross; amongst these, the emporia of J Sainsbury and an allotment market are pitted against each other to exemplify different approaches to feeding the city, and to life. This is part of the discussion explored in Deidre Kinahan’s masterly synthesis of characters and storylines about how we should live sustainably in a world with finite resources and a challenged environment.

Alexander Ferris’ production fuses everything together with great elegance and simplicity, in a staging designed with visual flair by Carla Goodman. Extensive video projections come from Duncan McLean, costumes are by Sarah Beaton, and David Gregory does sound, with lights from Andy Purves. In this gorgeous setting, Dom Coyote creates a musical score – with ‘found’ tracks by well-known Londoners merging into the singing of a 28-strong choir and supported by a small rock band, with a few very affecting soloists – that elevates the drama into a more aesthetically complex level. It is further enlivened by Anna Morrissey’s movement that spans a physical vocabulary ranging into the athletic and daring.

Quite what H G Wells would make of all this it is hard to say. He might put it all down to Fortuosity, or dismiss it as just a Rum Go. But we would probably be able to convince him that there never was a theatre quite like ours before.

FIND OUT MORE ABOUT TOMORROW MAYBE

FIND OUT MORE ABOUT PAPER HEARTS

FIND OUT MORE ABOUT RISE