Julian Eaves spoke to China Blue Fish and Deborah Antoinette about their production Queen C*nt: Sacred or Profane which comes to The Bunker Theatre in March 2019. 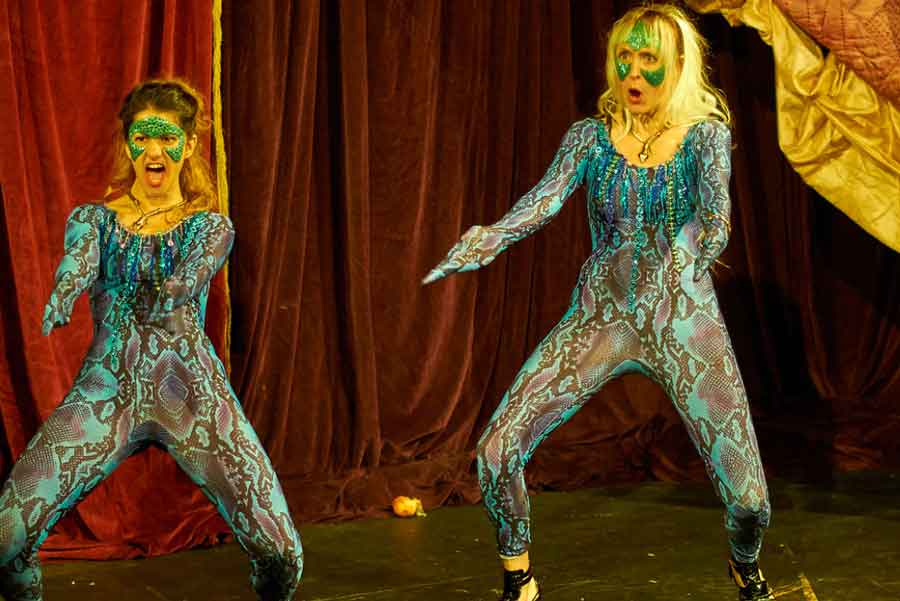 Producer Hannah Elsy knows a good thing when she sees it – and she never attaches her name to anything less than wonderful.  So, when I heard she had taken on the producing of the extraordinary work of China Blue Fish and Deborah Antoinette, I hurried to find out more.  Chatting recently to China and Debs, like a lot of people before me I found myself thrilled beyond expectation.

Right now, both are riding high on the generally glowing results of a much better than anticipated first showing on last summer’s Edinburgh Fringe; that, combined with a startlingly successful tour, has seen their work reaching out to and drawing in audiences much bigger and much, much more varied than anyone had anticipated.  So, who are they and what makes them tick?

China, with a bright, penetrating voice and the ability to make a strong, immediate, direct connection with her audience, has a background in performance art, acting and being a singer-songwriter; at times seen as a roller-skating or stilt-walking occasional entertainer, her work as an artist has always had an underpinning of social and environmental justice.  Her companion in this venture is Deborah, who is a perfect contrast in almost every way – mellow of voice, she almost sneaks up on you, like something out of one of her devised, collaborative plays or theatre performances, with a generous nod towards comedy, and a bit of a track record as an associate or assistant producer making sure that every contribution or intervention is judged flawlessly for effect.  Together, they share the same passionately driven commitment to a life as artists, and will do whatever they can to develop their work as a team. 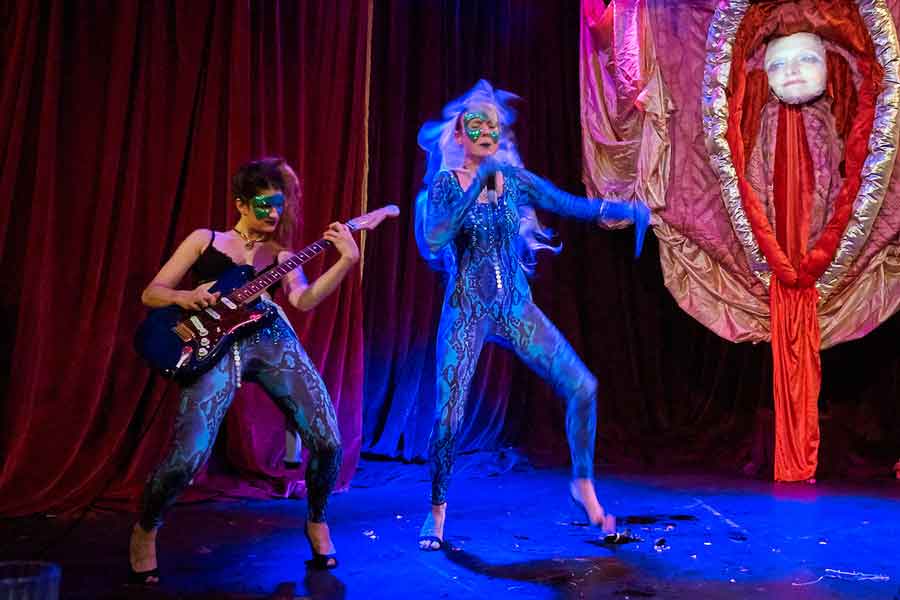 They met in Bristol, at the now recently defunct Hamilton House, where they were simultaneously members of the collective, Co-Resist.  Out of one of many conversations there, they discovered a shared motivation to explore the theme of harassment.  Then, when the offer of a residency at Exeter Bikeshed came along – well before #MeToo took off – they decided to merge their talents and set about seeing what they could make of their combination.  Topicality had to be there, and a commitment to respond to the current political or social climate, and they also knew they wanted their work to be infused with a spirit of fun, with gaiety and variety their watchwords.

Essentially, the stories they had to tell were based upon ‘idol revelations’: exposes of what really lies beneath the decorous fictions with which erring humanity shrouds its wayward objects of reverence.  And in this cavalcade, we get snapshots from the lives of significant women: from the Virgin Mary to the Maybot herself.  No one is safe from the satirical gaze of these two – including men, whom they also play.  Not that that keeps men away from their audiences: not at all.  In fact, they have been delighted to encounter a public that is as broad as their own artistic imaginations: women of all kinds are coming to see them, mothers, grandmothers, and men – lots of them: in fact, at some performances, they have had mainly male audiences.

What accounts for the scope of their appeal?  They say their aim is, quite simply, to address and represent, ‘a world in which we are supposed to be equal, and yet are not’.  A good, old-fashioned quest after the truth, then.  And to deal with, ‘what is earth-quaking in our gut’.  Good old visceral obsession, then.  The stuff of real theatre.  All done with a fineness of sensibility and a boldness and a daring in technique – from the precisely choreographed to the freest improvisation – that gives them their special character.

Along the way, they have established useful working relationships with a number of partners, both artistic and social: Bristol Women’s Voices, based in their point of origin in the south-west; the Fawcett Society, campaigning for gender equality; the Good Lad initiative, promoting positive masculinity in institutions across the country; and Lunette Cup, an organisation with global reach, seeking to end period poverty and the suffering that goes with it.  As they embark upon the next stage of their development here in the UK, it’s a pleasure to get to know them and be part of this adventure.  Book now!