Julian Eaves take a look at Am Dram a new musical comedy by Katie Lam and Alex Parker which recently previewed at The Other Palace Theatre. 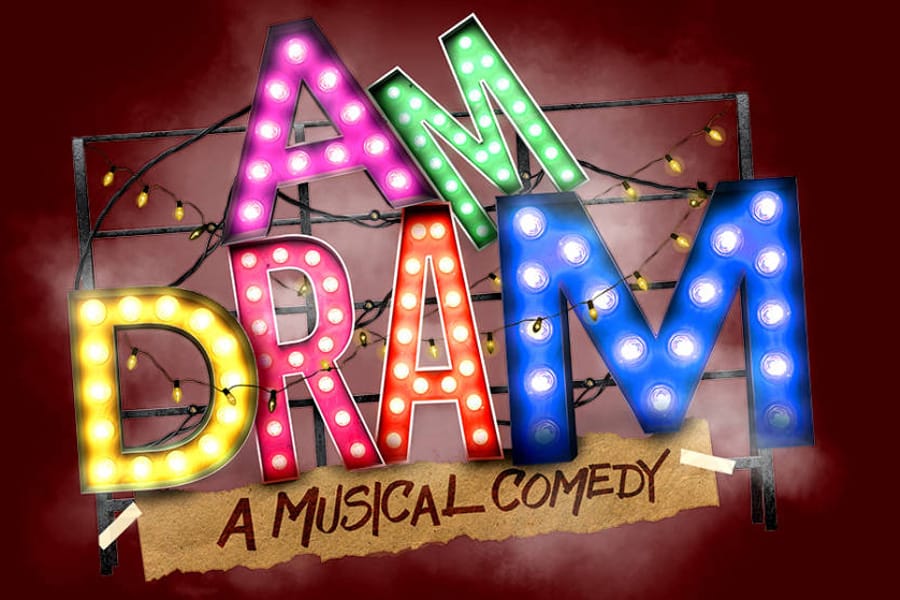 Am Dram: A Musical Comedy
The Other Palace
3rd February 2019

The time was that emerging songwriters could start off their careers writing numbers – one here, a couple there – for revue-type shows that allowed them to experiment, gradually, with what worked and what didn’t, and, through a slow, laborious process of trial-and-error, come to a realisation of their particular skills in musical theatre craft before they launched upon bigger projects.  This approach produced a lot of indifferent work, but also some which then started the careers of many talented creatives, including plenty of the greatest ever exponents of this genre.

Life today is not so simple.  Songwriters have to emerge not just with a few songs, but with a fully functioning, developed score and a script with strong dramatic viability.  The expectation is that one will produce complete musicals and have success in all departments pertaining to them: that’s a very tough call to make.  Success rarely comes in one masterful leap; it is usually the product of a step-by-step progress through the stations along the route, often taking in interesting excursions along lesser-frequented by-ways, all explored in the quest to arrive at something new and compelling.  As is often observed: an awful lot of different things have all got to go right at the same time and together for a musical to be a success.

Book writer and lyricist Katie Lam and composer Alex Parker are still at a relatively early stage in their journey as creators in this challenging and exacting realm (even though they began writing together when they were just eight years old: they are now young graduates making their way respectively in the City and in MD’ing).  A couple of years ago, on this website I reviewed their splendidly idiomatic and tonally adept ‘All Aboard’ – a screwball ocean-liner musical caper that married beauty of content with consistency of period register to a remarkably successful degree.  This, on the other hand, is a re-visiting of a much earlier piece, one that shows them in a younger phase of their growth and yet which also seems to point in newer and arguably more emotionally powerful directions that were not as well represented in ‘All Aboard’.

The dramatic set-up here shows Lam flexing her theatrical muscles in more challenging terrain: she presents us with the backstage story of life in an amateur dramatics group that is staging a musical based on the life of Catherine the Great, potentially creating parallels with the real-life antics of the cast and creative team.  Originally produced with a big amateur cast, this version – developed with the kindly and generous assistance of their newfound sponsors, Cunard (who lodged them upon the Queen Mary 2 for the purpose) – is a tighter ship, needing a cast of just seven and a slimline band.  Now, for one day only, the enterprising pair have brought their new delivery to the stage of the main house at The Other Palace to play it in front of two audiences in London.  This is a bold move.  Admittedly, though, one got the feeling that most of those attending were alumni of the ‘original’ (large) company and responded to the work very much as ‘insiders’, quick to pick up on knowing references and hidden private jokes and extremely favourably predisposed to like the work: I could be wrong about this, but quite how much usefulness there is in trying out new musical theatre writing in such surroundings is possibly open to debate.

Be that as it may, there were enough new people (like me) in the theatre to react with fresher eyes and ears.  And from our point of view, the great success of the evening was the chance to hear some of the most thrilling new songs we have heard on the musical theatre stage in a while.  There were three really strong numbers that stood out magnificently: the emotional heart of the story, and it is a breath-takingly strong one, is the trio for the main female characters that comes towards the end of the show, rather like ‘that’ famous other trio in ‘Der Rosenkavalier’, with one older woman looking back, giving way to the young(er) voices, as they strive forwards towards something new, as all three pause in time to reflect upon what ‘I should have known’.  This is one of the most hypnotically beautiful songs I have heard in a very long time: very few young writers can explore the bitter-sweet romance of love as well as this.  If the rest of the score were of this quality, and if the script did it justice, then this could be the most incredibly glorious hit of a show.

And that might be where this show goes.  It’s impossible to tell how things are going to develop.  Meanwhile, there are other great musical moments.  The bossy presence of the artistic director of the company, Honoria, has a peach of a song in ‘Always Me’, and playing her in this semi-staged workshop performance with scripts, Wendy Ferguson melted hearts with her soaring soprano: this is the best song in the first act, but please forgive me for pointing out that, sadly, it is rather wasted in being affixed to an incidental plot point, concerning a character whom we do not even meet.  This is the kind of dramaturgical hole that the book – as is – keeps falling into.  The other good number in the show is the second piece, a solo for the biggest name in this staging, Laura Pitt Pulford playing the part of Rose, in her (possibly tone-setting) ‘Out In The Light’: she sang it well, although, in an uncharacteristic slip, the arrangement by Martin Higgins was a little over-heavy and had a tendency to mask her voice (sound design, Paul Smith): otherwise, the orchestrations and sound production were terrific.  There was also an oddity in the plot: Rose’s character is a professional actress, resting, but trying to get back into the business, one way or another.  Not only that, Tom Edden’s funnily pretentious director, Max, is also a professional.  So, is this really – for purists – truly amateur dramatics?  Or is it really more Pro-Am?  It may sound like niggling, but the presence of these two ‘professionals’ is crucial to the story, and what the story is about.  There is one very strong, heartfelt speech in the second act that rang very true, in which the ‘doing it for the love’ message of the play became clear.  Lam may really have something magical here; maybe it just needs bringing into clearer focus throughout?

Getting the ‘tone’ right is a constant struggle.  While the play within the play (‘The Golden Empress’) sounds an awful lot like von Stroheim’s Dietrich vehicle, ‘The Scarlet Empress’, the play around the play brings us fairly firmly into Ayckbourn territory of the ‘Chorus of Disapproval’ type.  Rose’s deeply unsympathetic (and audience alienating) move at the close of the first act advertises this debt; Lam then has to construct a second act where the protagonist is herself absent from the main action for a long, long time.  She does what she can, but does this split really have to exist?  We lose all sense of the close camaraderie in the company that was so assiduously built up in the first act.  (For an object lesson in what damage this can do to a plot, study the second act of ‘Show Boat’, which is holed beneath the water-line by exactly the same problem.)

But, Jordan Lee Davies is here to sing – stunningly, with his ever more heroic tenor – and he also does the choreography (rather appealingly).  Thea Collings turns in an amusing act as no fewer than three faces of ‘Karen’.  Debbie Chazen is a down-to-earth Elaine.  And Denise Hodgkiss plays her fading company diva, Diane, with dignity and grace.  Alex kept the musicians humming along, and made the most of the key emotional hot-spots in his tuneful and catchy score.  It is fair to say, though, that there is a bit of a cleft between the ‘functional’ musical comedy establishing numbers (an opening chorus that doesn’t actually have much dramatic reason for being there) and the ‘pastiche’ up-tempo soul numbers (which remind us arguably too strongly of ‘Dreamgirls’, et al: it’s a style he can write with ease… possibly too much ease for it to hold the stage) and the real power and truth in the clutch of priceless songs that are given to the leading ladies.  Director James Robert Moore sensibly let those magical moments speak for themselves and kept himself as much as possible out of the way in putting over the script and score as cleanly as possible.

And the final impression?  Even though much of the time is taken up with cheap jokes and forgettable soap-opera dialogue, the lasting impression of this show, to my mind, is the genuinely touching, moving force of the lyrical journey represented by Parker and Lam’s finest work.  It’s lovely!  Yes, people do sometimes go to the theatre for trivial entertainment, but this doesn’t often happen with the lyric stage: there people generally want big stories about big emotions, even if some of the people involved in them are just like you and me (and some of them are not).  As a new writing combo, these two are amongst the best I know and I look forward to seeing and hearing what they do next, especially if they feel moved to go back to this show – perhaps with a new, more experienced person writing the book? – and dig deeper into the great story which may well lie at its heart.  Because it does have that heart.  And that is not something one can always, or even often say about new musical theatre.

(As is customary with works in development, no star-rating is awarded here.)