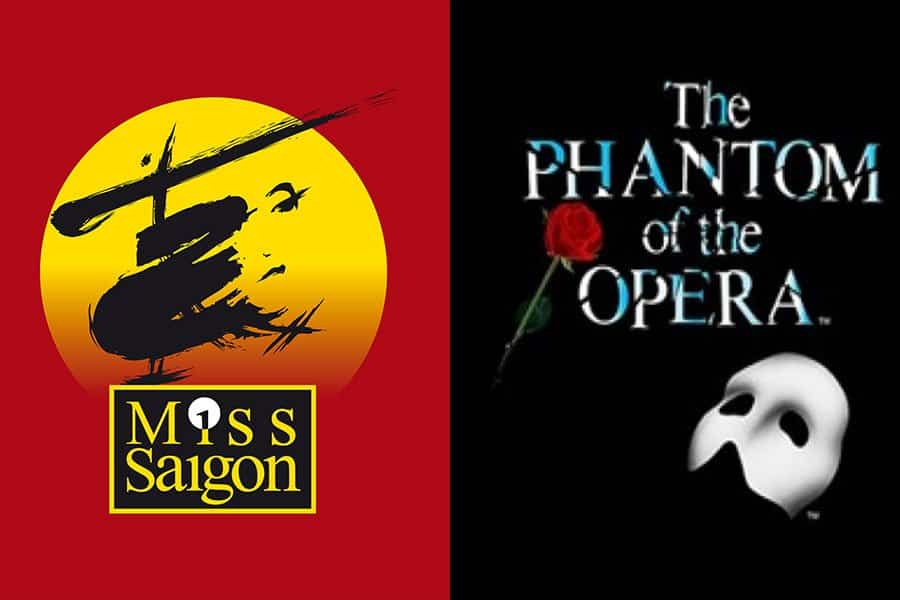 It was perhaps inevitable when you open up a public vote like this one that there is a chance of a tie somewhere along the line and such was the case with our Number 3 position when The Phantom Of The Opera and Miss Saigon recieved exactly the same number of votes.

The Phantom Of The Opera features music by Andrew Lloyd Webber and lyrics by Charles Hart with additional lyrics by Richard Stilgoe. Phantom is based on Le Fantome del l’Opera by Gaston Leroux.

Opening in London’s West End in 1986, on Broadway in 1988 and in Melbourne in 1990, The Phantom Of The Opera won the 1986 Olivier Award and the 1988 Tony Award for Best Musical. In London and on Broadway the show featured Michael Crawford in the title role with Sarah Brightman playing Christine Daae.

Phantom’s incredible direction and design brilliance were down to Harold Prince and Maria Bjornson respectively.

Phantom is the longest running show in Broadway history and boasts the biggest pit orchestra of any show on Broadway (with the exception of the limited engagement season of Lloyd Webber’s Sunset Boulevard which is currently playing on Broadway. In London, the show is the second longest-running musical.

With box office takings over $6 billion worldwide, it was only recently surpassed by The Lion King as the most successful entertainment event ever.

Loosely based on Puccini’s Madame Butterfly, Miss Saigon’s setting is relocated to Saigon in the 1970’s in the final days of the Vietnam War and its aftermath.

Opening at the Theatre Royal Drury Lane in 1989, Miss Saigon ran for 4092 performances closing in 1999. It opened on Broadway in 1991 where it is now enjoying a revival following the 2014 London revival which ran for two years.

There is little doubt in our minds that part of the phenomenal success of both of these musicals is partly due to acclaimed producer Cameron Mackintosh who bought his enormous skill to presenting these shows around the world.