Toby Stephens is to star in the Lincoln Centre’s Critically acclaimed production of Oslo when it opens at the National Theatre and then transfers to the Harold Pinter Theatre in the West End.

Toby Stephens in the role of social-scientist Terje Rød-Larsen, with Lydia Leonard as his wife, diplomat Mona Juul and Peter Polycarpou plays Ahmed Qurie, the former Prime Minister of the Palestinian National Authority. 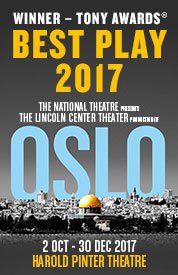 Oslo tells the story about how a couple (Stephens and Leonard) planned and orchestrated top-secret high-level meetings between the State Of Israel and the  Palestine Liberation Organisation, which culminated in the signing of the historic 1993 Oslo Accords.

Oslo by J T Rogers is directed by Bartlett Sher. It won Best Play at the 2017 Tony Awards and was winner of every ‘Best Play’ award on Broadway this season including those given by New York Drama Critics’ Circle, Drama Desk, Outer Critics Circle , Drama League, Obie and Lucille Lortel Awards.

Oslo is written by J T Rogers and directed by Bartlett Sher, with sets by Michael Yeargan, costumes by Catherine Zuber, lighting by Donald Holder, sound by Peter John Still and projections by 59 Productions.