This Thursday we spoke to Oliver Towse, star of the immersive production of The Great Gatsby.

One of the first shows I did was Les Mis for an amateur dramatic society, I must have been about 13, I played a little farmer in the first scene where Valjean’s moaning about something.

My love for acting started way before that but I remember during “bring him home”, the actor playing Valjean brought a cup of water with him on stage and had it set as a prop so he can have a drink mid-scene because he struggled to hit the high notes, I thought it was genius, we’re actually very good mates now and have done a lot of jobs together since, the water story always comes up.

2) What is your process each night when you get into character for a show?

The character work is always apart of you, not just before you go on stage but when you wake up, you have to do your checks, like opening up a shop in the morning or getting ready to open up a bar.

Do your checks, clear the dust, be in the best place you can be so your ready to receive whatever comes your way.

Before the show starts, Keep the energy up, don’t let your mind slip into the future and the journey of the show, just think about the present where you are, who you are with and what you’ve got to do first.

You cast members are your biggest allies, focus up and take it seriously

3) How was the rehearsal process for The Great Gatsby after being such a well-known book? Does it differ much from the book, and was there any pressure to make sure it was ‘in-keeping’ for fans?

The book is God, you move away from that and you’re a fish out of water when it comes to something like The Great Gatsby.

From the first day of rehearsal to my final performances the book was always within reach.

Fitzgerald gives you everything, the details are there, you have to find them, everything you need is in those pages, myself and the actor playing Nick would constantly be having conversations about the text and trying new things that we’d found in the book, it’s a beautiful story and the characters are so complex, you’ll never complete that final boss fight of understanding Mr Gatsby, but when you undertake a part like Jay you have to be prepared to get stuck and frustrated sometimes, I’ll tell you that for free. Ha! 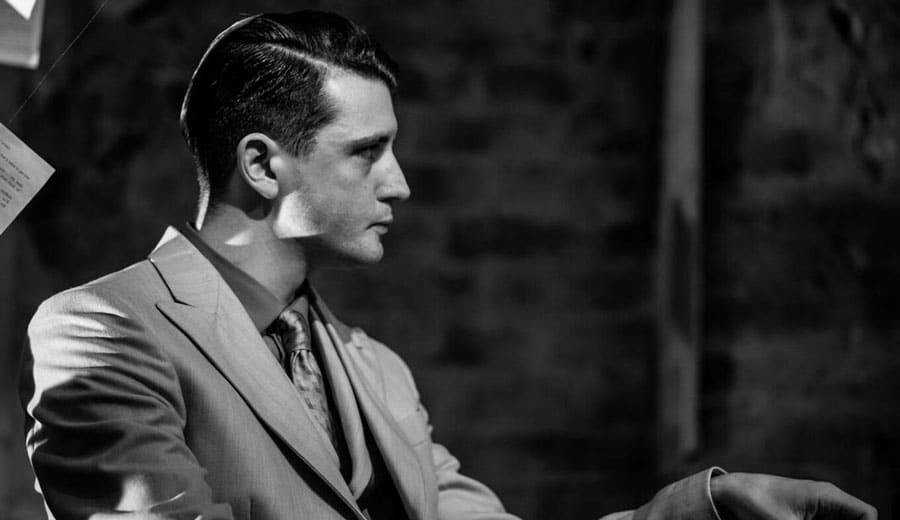 4) Tell us about the immersive quality of the show from an actors perspective?

Oh, it’s so much fun, such a different energy and set of skills to work with when it comes to immersive work.

No downtime, no wings, no backstage.

You get a small rest bite at the interval, check-in with the stage management but apart from that, you are on, and I love it, as a performer, it challenges you constantly, keep that ball up or you’re gonna find yourself caught out and embarrassed, as soon as an audience member sees a flicker of “Oli” the whole illusion is lost in that moment, it ruins the show for them, immersion is about suspending your belief, we as performers help them do that and keep it moving so eventually, the audience doesn’t have to think about where they are, they’re just there and loving it!

5) Tell us about one of your best/funniest memories from the show?

There really are too many for me to just choose one, being apart of this show has changed my life, I go into work every day, loved my job, loving the people I work, that’s very rare.

The audience brings me some of the funniest memories, people, the fear when you engage with them that melts into relief and then laughter and joy, beautiful moments.

With Gatsby the stage is also set for them, be who you want to be in this moment, it’s the 20’s and when people embrace It, take it and run with it, my god, we have so much fun!!

6) How have you been keeping creative in lockdown?

I’ve been reading a lot, I’ve been absolutely hammering TED talks and of course, tiger king.

I’m not a writer myself, so haven’t jumped into that side of things yet, but I know a lot of creatives have been turning to the pen in these times.
I’ve actually really enjoyed lockdown, it’s given time, which is a rare thing, we’ve all been in the same boat, something nice about that.

7) What three things can we always find in your dressing room?

8) If your life were a stage show what would it be called, and why?

The hole in my pocket.

9) What are the main differences for you working on film and in theatre, do you have a preference?

For me you’re so much closer to the people you’re working with on a theatre gig, you develop and create a little family.

I’ve rarely felt like that on a film set, (thoughg I can’t speak for epic year long shoots) I’ve loved the work I’ve done and the people I’ve been with on every set I’ve been on but there is definitely more of a serious nature to sets, time is so important on a set so I think the vibe is different, not necessarily a bad thing.

10) If you could give any advice to your younger self just starting out in the industry, what would it be?

Don’t take yourself to seriously
Work as hard as I’ve done.
Don’t steal that mars bar from the village shop, it’s still awkward to go in, even when you’re 30