What was your first ever show that you did as a kid, and what was it that got you into the theatre world?
My first show (besides my local theatre group compilation shows) was Dick Whittington. I remember Eltjo De Vries who played King Rat appointing me as his second in command which I took very seriously and made a prop telescope out of an old Christmas Malteser tube…unprompted. I thought it would be appropriate to accompany my one-liner “Look! Over there.” Always keen to impress…and eat Malteasers.

Why is theatre important to you?
Theatre to me is so important for allowing time to just forget and submerge myself into whatever it is I am watching or performing in. The sense of community and companionship is so important, and it’s something I have realised more over this past year. I miss people. Theatre allowed me to make so many new connections constantly. Whether seeing the same faces and new in the corridors at auditions, sharing some encouraging words to each other or the first day of rehearsals when you meet an entire new cast and sometimes make friends for life. It’s also a powerful tool for education and progression allowing people to make statements and present ideas. 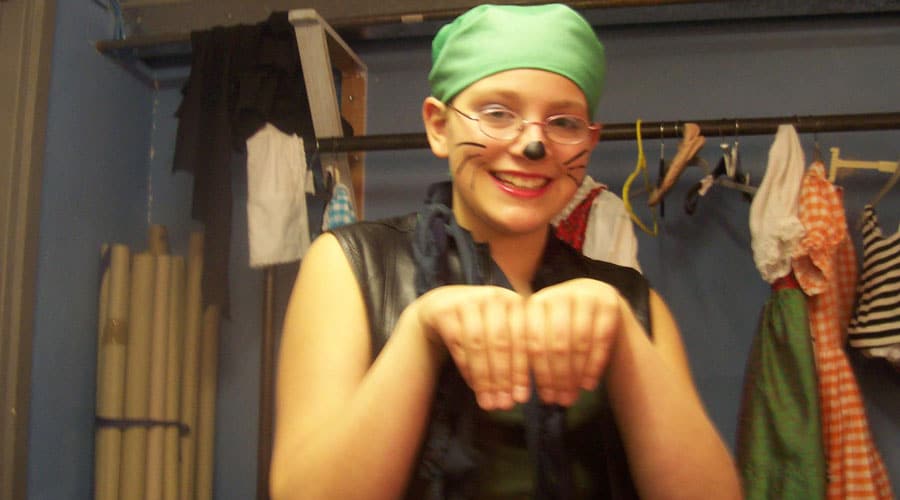 What is your process when you get into character for a show?
Once you put enough work in during rehearsals the character becomes second nature but undoubtedly getting into costume and waiting in the wings as the overture plays is when I start to feel my character come to play. I think music is such an amazing tool for transporting you into a place in time. Music can completely change my mood and bring so many different emotions. I remember working at The Nottingham Playhouse doing Sweet Charity and just hearing those famous Big Spender Trumpets and you’re instantly like…ok yes this is the feeling.

How have you kept creative during the pandemic?
I have been putting a lot of effort and time into acting for the screen during the pandemic, doing workshops and classes run by some great companies called Mixing Networks and JAM. I would occasionally just have a sing or listen to some music, and watch films to get inspired! I’m also quite crafty so have been getting quite hands-on upcycling things and drawing. Then also there are times when I have really struggled to have any creative motivation, which I believe is perfectly normal…it comes in waves. 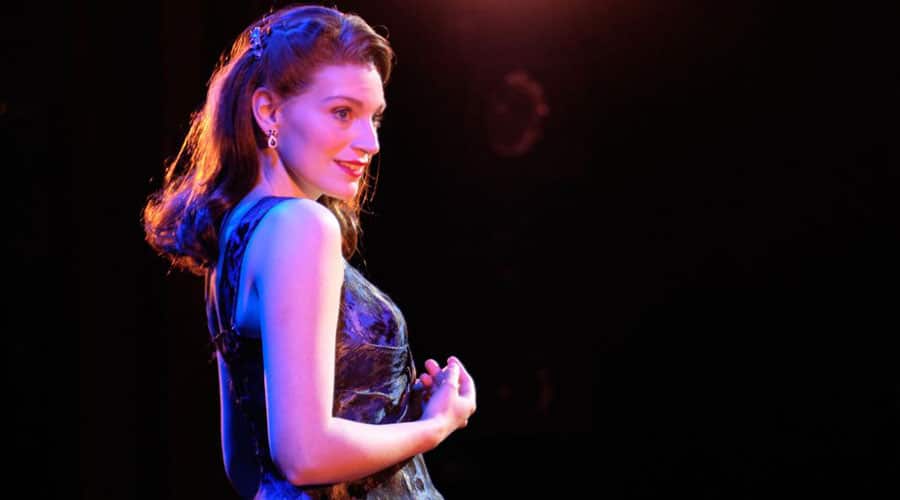 We were lucky enough to catch you in ‘Curtains’ last year, playing the role of ‘Niki Harris’. Tell us about your experience in the show, favourite theatres you performed in and starring alongside the wonderful Jason Manford.
Curtains were such a wonderful opportunity for me. I didn’t know it when I accepted the job but it ended up being my WestEnd debut, so that was pretty special.  We visited some amazing theatres across the country, I particularly love the Sheffield Theatre audiences… they are always so supportive. We had a stellar cast also who was a joy to perform with. Working with Jason Manford was a pleasure. He is a very generous man onstage and offstage and so supportive and of course funny. The company as a whole were very hardworking and we all wanted the best production we could give. With a creative team like Paul Foster, Alistair David and Sarah Travis you can’t go wrong really…they are all so inspiring and incredible at what they do, working seamlessly with each other and the company.

You also feature in ‘Unforgotten’ series theatre, starring Nicola Walker, playing the role of ‘Maya’. What’s the main difference for you working on film vs. theatre? Do you have a preference?
Working with Nicola Walker and Sanjeev Bhaskar for my first TV credit was an absolute treat! It was amazing to watch and learn from them. I was very honest and asked for the low down when we were driving to the set. I love the simplicity and natural style of acting for the camera. How so much can be read with such subtlety, I love it. I have really got the bug for it and hope for more to come. I guess the main thing with theatre is having the opportunity to try new things and keep on exploring as the run goes on but with screen work the character development and exploring happens before you get in front of the camera and then you just have to be happy with what you did! A career of both would be lovely please and thank you.

Tell us about one of your best/funniest memories on stage?
I do believe that my costume for Ursula in Sweet Charity was cursed. I had so many moments onstage that I’m so glad I could laugh at. My heel getting stuck in the only hole on the stage…Jeremy Secomb who played Vittorio managed to get his button stuck in my wig during some passionate moment and then the icing on the cake was falling flat on my bottom trying to look glamorous in a floor length fur coat…Lets just say it wasn’t smooth. I do have to mention something which I didn’t actually witness for myself as I was offstage but have engrained in my imagination for my own pleasure…Emma Caffrey doing her usual thing looking fabulous and dancing like a dream as a saloon girl in Curtains…when her wig fell off into her hand as she was dancing. Full wig cap for all to see. I could go on…This is why I love theatre.

What three things can we always find in your dressing room? I.e Lucky charms…things that help you on stage…blue m&ms..
I don’t think I have any lucky charms as such… but I do always have handy a Boots Dry Mouth spray which Rebecca Lock introduced me to…it was a lifesaver on tour getting used to different theatres backstage, a lot of venues are so dry which isn’t ideal when you have to sing. I have a diffuser and oils as i’m a big fan of creating a calm atmosphere. You can always smell where my dressing room is! And probably some M&S chocolate round biscuits…if you know, you know. Oh and If I could have a dressing room dog that would be ideal.

If your life were a show what would it be called, and why?
Decisions. I’m really terrible at making decisions… in all aspects of life. Maybe the show would see me overcoming this. I’d love to know the trick. Never ask me what film to watch!

What advice would you give to all new graduates?
My advice for new graduates would be to support and champion each other… as it really isn’t going to be fun if you are bitter and unkind. Allow yourself to feel sad about missed opportunities but know that you are on the right path for you. You will hear it time and time again but try your hardest to not compare your journey to others…I still have remind myself that one also. New graduates are usually at their most fit and raring to go so being professional, hard-working and reliable goes without saying but I think the most important thing is to be kind and generous. I was incredibly lucky to have lots of shorter contracts when I graduated which meant I met and learnt so much from people who were already working in the industry… college can only teach you so much.