The full schedule has been announced for The Show Must Go Online – a project to live-stream readings of all the works of Shakespeare.

After starting with The Two Gentlemen of Verona (pictured) and The Taming of the Shrew, the next reading in The Show Must Go Online will be Henry VI, Part 1 which will be streamed via YouTube on 2 April at 7pm (UK time). They are being performed weekly in the order that Shakespeare is generally believed to have written them.

Casts in the UK and around the world are being brought together, using meeting platform Zoom, by Robert Myles, a classical actor and director, writer and freelance creative lead.

With each play reading remaining on YouTube afterwards, The Two Gentlemen of Verona has gone on to attract nearly 35,000 views. Aiming to mimic the experience of a staged reading in the home, the performances include an interval.

The performance of The Taming of the Shrew on 26 March integrated with the Clap for our Carers at 8pm. The cast included Mary Bragg Ion who is an NHS trauma therapist. 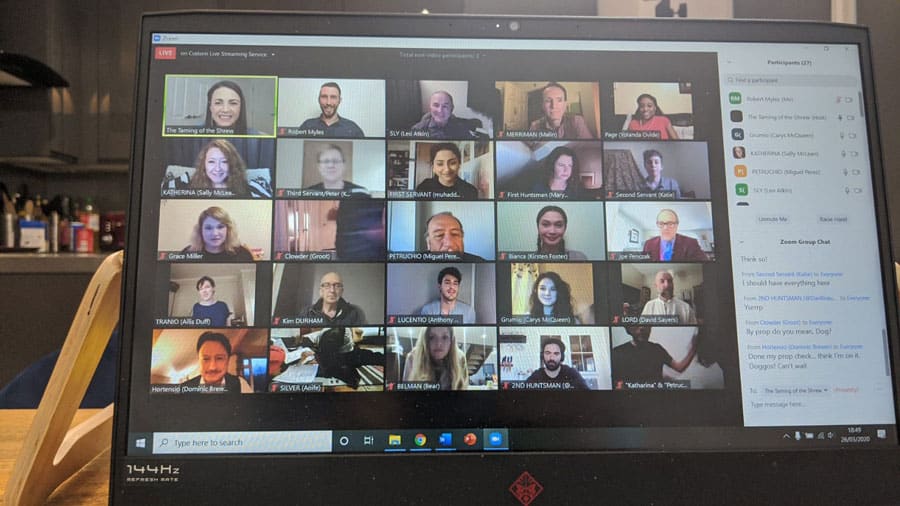 Although the readings are free to view, the company has established a Patreon for the venture at patreon.com/TheShowMustGoOnline, which will be used as an opt-in hardship fund for the actors who take part.

The live-streamed readings aim to bring actors and audiences together to collectively enjoy and experience Shakespeare at a time when connecting in a traditional theatre space isn’t possible.

For updates, check out the hashtags, #ShowMustGoOnline and #ConnectedAndCreative, on social media and follow @RobMyles on Twitter.

For information about becoming a member of the cast – Click Here