From blockbuster Disney film to Broadway sensation, The Lion King is an epic tale beloved by young and old. It is now Broadways 4th Longest running show with over 80 million people having seen the show worldwide.

The Lion King tells the story of young lion prince Simba and his struggle to find his rightful place in the world.

Brought to the stage with a cast of more than 40 dancers, singers and actors and directed and designed by Tony Award-winner Julie Taymor, the stage musical version of this award-winning film is nothing short of spectacular.

The movie was the first in film history to portray no human beings at all, and on stage too the human performers disappear behind an astonishing collection of masks, costumes and puppets. Expert skill and incredible set design come together to bring the diverse animals of the savannah miraculously to life.

Brimming over with adventure, music and extraordinary stagecraft, the musical The Lion King must be seen to be believed. Playing at the newly-refurbished Minskoff Theater, book your tickets today to see one lion cub’s incredible journey to the throne.

“A new generation of cats just took over Broadway. Simply said, Julie Taymor’s staging of Disney’s “The Lion King” is a marvel, a theatrical achievement unrivaled in its beauty, brains and ingenuity. Leaping far beyond its celluloid inspiration, the stage version improves upon nearly every aspect of the hit 1994 animated film, from visual artistry and storytelling to Lebo M’s score and the newly African-ized pop songs of Elton John and Tim Rice. With this production, the Walt Disney Co. stages itself as a serious and ambitious contender on the legit scene, all but demanding that its first theatrical foray, 1994’s too-literally adapted “Beauty and the Beast,” was little more than a warm-up”.
Variety

Running time: 2 hours and 30 minutes including intermission
Suitable for ages 6+ 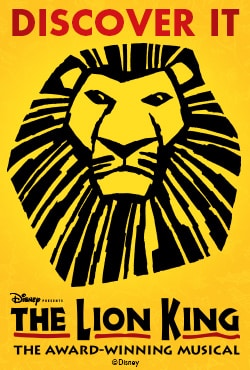