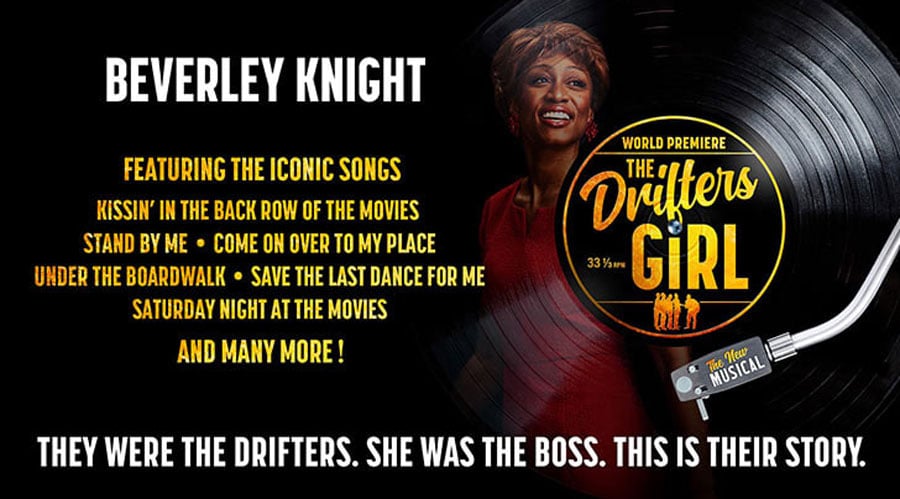 Producers of new musical The Drifter’s Girl have decided to postpone the production until Autumn 2021.

Preview performances at the Garrick Theatre, London will now commence on Thursday 4 November 2021 for a strictly limited 20 week season. Prior to London the show will have its World Premiere at Newcastle Theatre Royal from 9 October 2021.

The Drifters Girl is a brand new musical which tells the remarkable story of one of the world’s greatest vocal groups The Drifters and Faye Treadwell (played by Beverley Knight), the legendary manager of The Drifters, who, alongside her husband, fought for three decades to turn Atlantic Records’ hottest vocal group into a global phenomenon.

From the highs of hit records and sell-out tours to the lows of legal battles and personal tragedy, The Drifters Girl charts the trailblazing efforts of the world’s first African American, female music manager and how she refused to ever give up on the group she loved. Thirty years, and hundreds of hit songs later, there is no doubt that Faye Treadwell was and always will be, The Drifters Girl.

With an incredible soundtrack of some of the most famous songs in history, including Save The Last Dance For Me, Under The Boardwalk, Kissin In The Back Row Of The Movies, Stand By Me, Come On Over To My Place, Saturday Night At The Movies and many more, The Drifters Girl will play for just 15 performances in Newcastle before transferring to London for a limited 20 week season.

The Drifters Girl, with a book by Ed Curtis, will be directed by Jonathan Church, designed by Anthony Ward, choreography by Karen Bruce, lighting design by Ben Cracknell and music supervision and orchestrations by Chris Egan.

N.B. There are 5 dates over the Christmas period that cannot be directly rescheduled, these should be treated as cancelled performances and be exchanged or refunded in the usual way.