Award-winning comedy double act The Pin will bring their brand new comedy The Comeback to the Noel Coward Theatre London this Christmas.

The Comeback, a brilliantly original and hilarious new comedy comes to the Noel Coward Theatre this December. This debut play from The Pin’s award-winning Ben Ashenden and Alex Owen – ‘destined to become one of the great comedy duos’ (Radio Times) – tells the story of two double acts fighting to wrest control of the most chaotic, farcical and high-stakes gig of their respective careers.

Directed by Emily Burns, The Comeback will have audiences doubled over laughing and wiping a tear away at the end with its heart-warming exploration of bittersweet nostalgia and the enduring power of friendship. This show is a much-needed dose of feel-good, dizzying escapism with real emotional heart, and a celebrity guest each night to boot.

Up-and-coming comics Alex and Ben have been booked in the warm-up spot for a beloved but fading double act’s comeback tour. Neither duo are delighted to be playing to a sparse crowd in a sleepy, seaside town, but when it’s revealed that a Hollywood director is in the audience, both acts glimpse a final chance for their big break. Cue sabotage, mistaken identity and full-on farcical mayhem, as the performance descends into a desperate battle for the limelight. With the action alternating between offstage and on, and the tone between Noises Off and Morecambe and Wise’s old-school charm, this is a warm-hearted, joyful, and dazzlingly funny new comedy.

Each night Ashenden and Owen will be joined on stage by a surprise celebrity guest star playing a cameo role in the production. Details to be confirmed at a late date.

Ben Ashenden and Alex Owen said: “After 8 years of lugging props between tiny venues, and 8 months of watching those props gather dust, we feel ridiculously excited and fortunate to be bringing a play to the West End. For it to have been developed with and presented by a producer of Sonia Friedman’s immense standing makes us very proud, and provides ample material for anxiety dreams in which hidden cameras are revealed and words like “prank” shouted. We hope to provide 90 minutes of silliness, escapism, and extremely well-dusted props.”

The production, which is the first produced by SFP since lockdown, will play at the Noel Coward Theatre. Audiences and company will observe social distancing guidelines and strict COVID-secure protocols. All practices will be following the most up-to-date government guidance and SOLT’s ‘See It Safely’ campaign.

BOOK TICKETS FOR THE COMEBACK 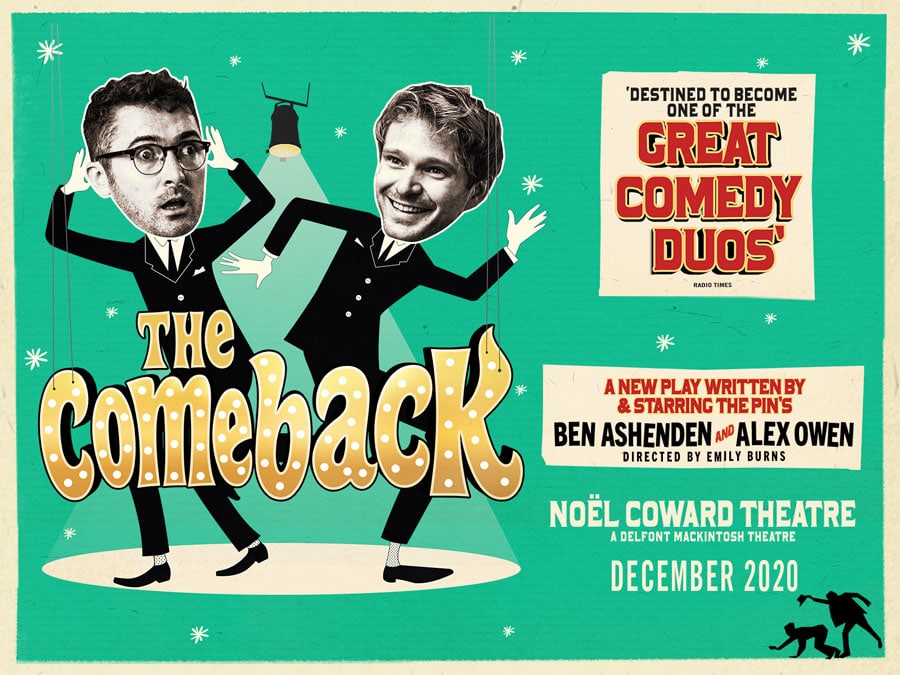