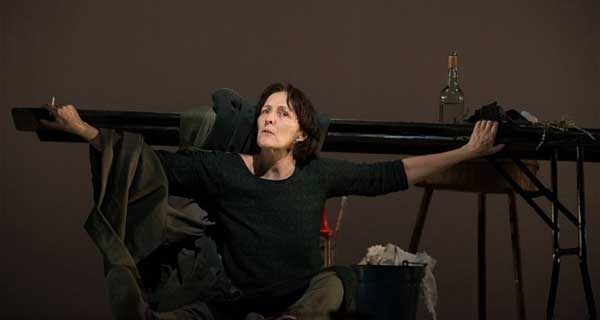 One of the great mysteries, one of the burning imperatives of our time, one of the most thought-provoking and much discussed controversial topics of modern life is solved, uncovered and illuminated by Deborah Warner’s production of The Testament of Mary, now playing at the Barbican Theatre.

Fiona Shaw shaves all of her pubic hair.

Well, at least she does for this production, which is a “solo show” that is a collaboration between Shaw and Warner, the text of which is written by Colm Toíbín.

I mention this because, startlingly, that revelation is really the only one the production has to offer.

Toíbín wrote the piece first as a monologue, then a novella (listed for the Booker Prize) and then Warner and Shaw took their collaboration to Broadway and from there to the Barbican.

Toíbín writes with skill and deftness; some of the passages here are wonderfully evocative, almost magical in their range and beauty.

The simple conceit is to tell many of the high points of Christ’s life from the point of view of his mother, a woman who, like so many others, sacrificed her life and happiness for her child. Of course, it is not a simple version; Toíbín laces the narrative with unexpected events, thoughts and feelings, thereby commenting on faith, feminism and modern preoccupations while also dealing with Lazarus, the crucifixion, the resurrection and other central tenets of Christianity.

It would, no doubt, be a powerful radio play. Indeed, Warner ‘s production makes the best case possible for Toíbín’s words to be read or merely heard; the reader’s or listener’s imagination can conjure more relevant and pertinent possibilities than Warner manages here.

Proceedings commence by the audience being invited onto the stage where they can meander around the various props and pieces of furniture. Then Ms Shaw enters the stage with a huge vulture on one hand and walks among the audience. This all seems to suggest a notion of “picking over bones”, a thought re-inforced by the disappearance of said vulture when the text comes into play and the first image when the lights go up: Ms Shaw producing two dry bones from within her garment.

Yes, it really is as ham-fisted and clunky as it sounds.

In the programme, Warner says:

“When asked what it is like being alone on stage, Fiona replies that she is not really alone in Testament. Apart from her pre-show feathered friend – the vulture, she is supported by an extraordinary landscape and soundscape – which bring layers of presence and life to the dreamscape within which she plays. But I think we would both say there is a further dynamic to this feeling of community.”

In case you are interested, it turns out that that surprising further dynamic is – the audience. Who would have thought that in a live theatrical production the response of the audience would have played a significant role?

Everyone who has ever performed in or directed a play.

But back to Warner’s “extraordinary landscape and dreamscape”. This is the clutter of props and furniture, lovingly arranged by Tom Pye, none of which does anything really to illuminate the text, but all of which gets in the way of Shaw’s performance.

What Warner does is to try to impress the audience with tricks – costume changes, a tree that doubles for the cross of crucifixion (and actually is quite lovely, suspended as it is above the ground, tantalisingly out of reach of expectations), screens that move up and down and across and from which light reflects or shines or changes colour, chairs, a pool of water into which the suddenly naked Shaw immerses herself a la baptism, a cage for the absent vulture, a ladder, a table and other detritus.

It is all distraction, as if the raw power of the work is not sufficient to hold the attention of the audience, as if Shaw is not capable of maintaining the attention of a full house for 80 minutes. Warner’s cluttered pointless augmentation of the word merely detracts from it, limits it, diminishes it.

Shaw is occasionally magic. The sections about the crucifixion and the resurrection have her at her best. But, shorn of the Warner nonsense, she would do better; there is no doubt of that.

In a way, her most impressive performance occurs when the text is done and the lights have fallen and then risen again for applause. There, in that moment, Shaw conveys a sense of complete exhaustion; she makes you believe (well, almost) that no one has ever worked as hard on a stage anywhere. But her eyes tell a different story – they are alive, searching, demanding the acclaim. Fascinating. Such deliberate manipulation.

This is a ruthless and pointless attempt to manufacture greatness. It fails in every possible and measurable way. Even those who leapt to their feet at the end were lost in a fog of head-scratching uncertainty while the play was performed. Listless incomprehension turned into compulsory adoration – after all, the Guardian gave this five stars. And Shaw is a great actress.

It is true: Fiona Shaw can do wondrous work. Just not this time.

This time, once again, Deborah Warner missed the point and all but destroyed everything of value about the theatrical experience.

A fabulous cure for insomnia.