A star-studded concert version of Les Miserables is to open at the Gielgud Theatre London for sixteen weeks only in August 2019 featuring Michael Ball, Alfie Boe, Carrie Hope Fletcher and Matt Lucas. 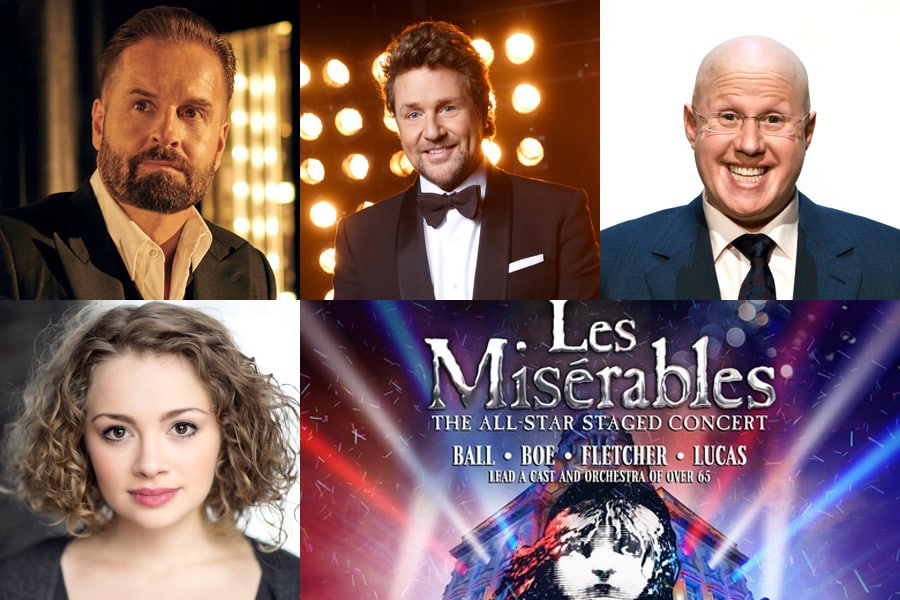 Cameron Mackintosh has announced that for 16 weeks only Michael Ball (Javert), Alfie Boe (Jean Valjean), Carrie Hope Fletcher (Fantine) andMatt Lucas (Thénardier) will lead a large cast and orchestra of over sixty-five in the concert version of Les Misérables.  Katy Secombe also joins to play Madame Thénardier and for three performances a week, the role of Jean Valjean will be played byJohn Owen-Jones.  Further casting will be announced shortly.

This spectacular staging of the legendary concert, previously seen in London at the Royal Albert Hall and the O2 Arena, will run from 10 August – 30 November 2019 at the intimate Gielgud Theatre next door to the current home of Les Misérables at the Queen’s Theatre.

Cameron Mackintosh said:  “The success of Les Misérables continues to amaze me and break new ground.  Despite the fact the show continues to play to 95% capacity we have been obliged to close the production at the Queen’s Theatre for 16 weeks this Autumn to do much needed work.   This includes restoring the ceiling plasterwork and the auditorium, adding many more lavatories, as well as carrying out major renovations backstage, which haven’t been touched since the 1940s. The theatre was heavily damaged during World War II and has never been properly restored and brought up to modern standards.”

“Les Misérables is the only musical ever that has been equally successful on stage, film, in concert and in the classroom.  Its spectacular staged concerts are legendary successes, just as popular as the stage show.  I am thrilled that the plan to keep Les Misérables running in London with a staged concert version on Shaftesbury Avenue during the enforced closure period has attracted such a stellar cast, with Michael Ball, Alfie Boe, Carrie Hope Fletcher, John Owen Jones, Matt Lucas and Katy Secombe, who all have a very close personal connection to the history of the show. Of course I am a bit miserable that Michael, the gorgeous young actor that created the student Marius in the original production, is now for the first time old enough to play the implacable inspector Javert, an amazing match for Alfie’s career defining portrayal of Jean Valjean.”

“I know fans are in for a unique and amazing experience from our huge Company who will be performing in the glorious intimate theatrical space of the Gielgud Theatre.”

Produced on stage by Mackintosh, Les Misérables is the world’s longest running musical now in its 34th year in London.   Its celebrated score includes the songs, I Dreamed a Dream, On My Own, Stars, Bring Him Home, Do You Hear the People Sing?, One Day More, Empty Chairs at Empty Tables, Master Of The House and many more.  Produced on screen also by Mackintosh (along with Working Title and Universal), Les Misérables is now the most successful movie of an ‘original’ stage musical.

The Original London production currently at the Queen’s Theatre (following runs at the Barbican and the Palace Theatre) will play until 13 July 2019 when the theatre will then close for four months of rebuilding work both backstage and in the auditorium as well as adding many much-needed new lavatories to the front of house.  This work will also restore architect W.G. Sprague’s original boxes and loges which, along with the entire front of house, were destroyed by a bomb in 1940 and caused the theatre to be closed for 20 years.  The restored Queen’s Theatre will reopen in December of 2019 with a new production of Les Misérables continuing its phenomenal run indefinitely, with a new West End company being put together now.

The new production of Les Misérables, with a separate company, is currently on arecord-breaking international tour, sold out a year in advance through to January 2020 which has now been extended to Autumn 2021.  Box office for the additional dates will open shortly.

Book Tickets for Les Miserables at the Queens Theatre