Frank Wildhorn has announced special guests Christine Allado, Kerry Ellis, John Owen-Jones, Natalie McQueen and Kayi Ushe are to join him for Frank and Friends at Cadogan Hall on 16 January 2022. 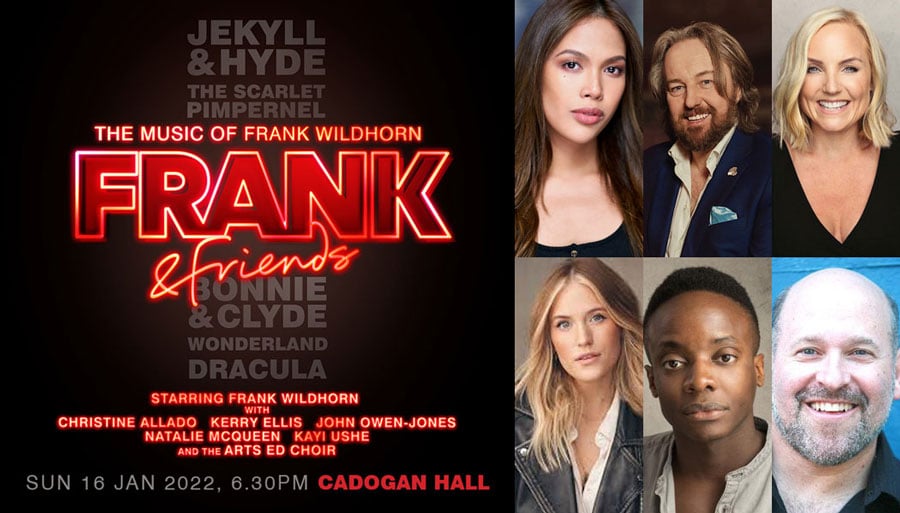 Frank Wildhorn is delighted to be performing Frank and Friends for the first time in London. This concert celebrates the breadth of renowned work from composer Frank Wildhorn, with selections from his pop, jazz, and theatre catalogues, including music from his musicals, Jekyll and Hyde, The Scarlet Pimpernel, Bonnie and Clyde, Wonderland and Dracula.

Frank will present this concert whilst in London working on Bonnie and Clyde in Concert at the London Palladium.

Frank Wildhorn is a Tony, Grammy, and Emmy Award-nominated celebrated composer of both musical theatre and popular songs including having written the Number One international hit “Where Do Broken Hearts Go” for Whitney Houston. Throughout his career he has written songs that have been recorded and performed by artists such as Hootie & the Blowfish, The Moody Blues, Stix, Johnny Mathis, Patti LaBelle, Trisha Yearwood, Colm Wilkinson, Anthony Warlow, Michael Ball, Beverley Knight, Kenny Rogers, Sammy Davis Jr, and Natalie Cole, to name a few. Among his forty original shows around the world are Jekyll & Hyde, The Scarlet Pimpernel, The Civil War, Dracula, Wonderland, Bonnie & Clyde, Victor/Victoria, The Count of Monte Cristo, Carmen, Rudolf, Camille Claudel, Mata Hari, The Man Who Laughs, Death Note, Excalibur/Artus, and The Man Who Laughs. This Christmas, the Vienna Symphony Orchestra’s recording of an original composition by Wildhorn will be released, making him the first American to have a full-length symphony premiered by the World-renowned company.

Christine Allado is best known for her award-winning performance as Peggy Schuyler/Maria Reynolds in the original West End production of Hamilton and for playing Vanessa in the Olivier Award-winning production of In The Heights. Most recently she has been playing the role of Tzipporah in The Prince of Egypt at the Dominion Theatre.

Kerry Ellis is the chart-topping recording artist and Broadway and West End star whose theatrical credits include originating the role of Meat in We Will Rock You at the Dominion Theatre and being the first British Elphaba in Wicked at the Apollo Victoria. Her other West End credits include Grizabella in Cats, Nancy in Oliver!, Eliza Doolittle in My Fair Lady, Ellen in Miss Saigon and Fantine in Les Misérables.

John Owen-Jones is a Broadway and West End star and recording artist, whose credits include playing Jean Valjean in Les Misérables and The Phantom in The Phantom of the Opera. He has now recorded six studio albums, with his most recent, Spotlight, having been released in February 2019.

Kayi Ushe’s theatrical credits include The Book of Mormon in the West End and the National Tours of Kinky Boots and Avenue Q.

Frank & Friends is presented in London by Fourth Wall Live