Representatives of the monarchy have proclaimed that the Queens from Six the musical will move to the Vaudeville Theatre. 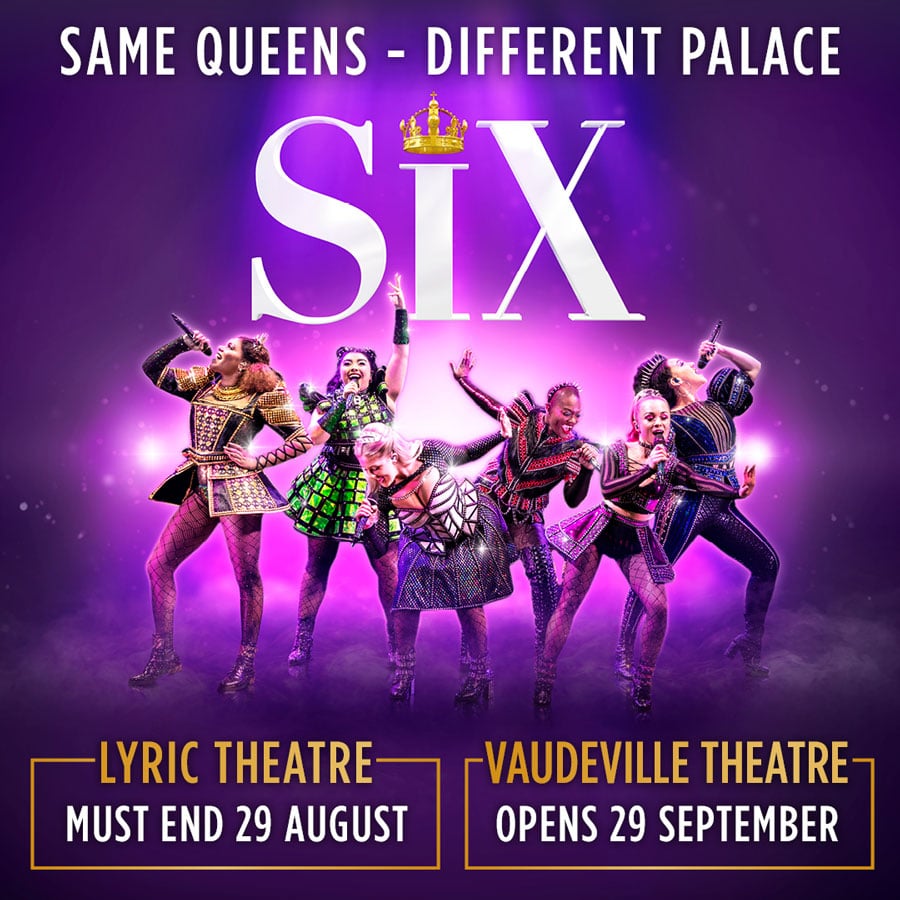 Six the musical will move to the Vaudeville Theatre on 29 September, but the move has not been without controversy.

Six has become a worldwide phenomenon since it opened at the 2017 Edinburgh Fringe Festival. Since that time, it had been playing to sell-out houses at the Arts Theatre until the pandemic struck. The show then moved to the Lyric Theatre where it will now run until 29 August 2021 with the first performance at the Vaudeville Theatre scheduled for 16 November 2021. Book Six Tickets.

From Tudor Queens to Pop Princesses, the six wives of Henry VIII take to the mic to tell their tales, remixing five hundred years of historical heartbreak into an 80-minute celebration of 21st century Girl power. Critically acclaimed with a spectacularly successful studio album adored on playlists across the globe, the New York Times royally decreed that Six the musical is ‘pure entertainment!’

Six by Tony Marlow and Lucy Moss was nominated for five Olivier Awards including Best New Musical. It won the BBC Radio 2 Audience Award for Best Musical at the Whatsonstage Awards, performed on the results show of ‘Britain’s Got Talent’ and has performed annually in front of thousands at West End Live in Trafalgar Square.

The studio album has clocked up more than 200 million streams making it the second-highest streamed cast recording in the world, second only to the ‘Hamilton’ original cast recording.

Meanwhile, the Broadway production of Six which was closed down due to the pandemic on its opening night has announced it’s re-opening on 3 October 2021 at the Brooks Atkinson Theatre. The UK Tour of the show will continue to run concurrently.

The monarchy have also announced their Christmas 2021 performance schedule which can be seen below.

“We and Nimax, are fully committed to ensuring this can happen and are very happy to engage with anyone who can help work together with us to make that possible. Please contact us through access@sixthemusical.com if you would like to be part of the ongoing conversation with us”.

BOOK TICKETS FOR SIX THE MUSICAL AT THE LYRIC THEATRE

BOOK TICKETS FOR SIX THE MUSICAL AT THE VAUDEVILLE THEATRE