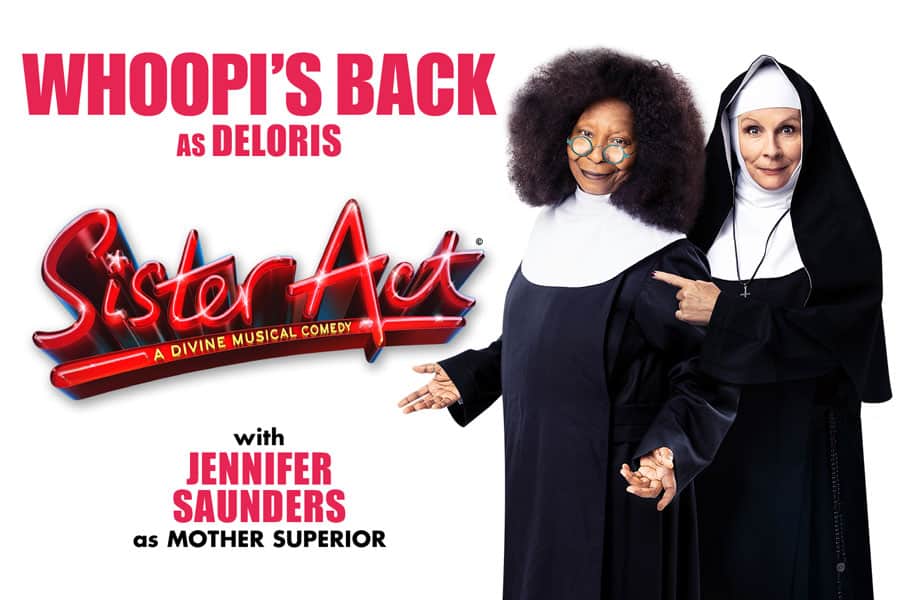 The twitterverse and theatre chat rooms imploded late on Wednesday evening, when the news dropped that Hollywood legend, vocal Trump opponent, and host of The View, 63-year-old Whoopi Goldberg was to reprise the role of Deloris Van Cartier in the limited West End engagement of Sister Act – a role she originated, aged 36, on the silver screen some 27 years ago. What’s more, the absolutely fabulous 61-year-old Jennifer Saunders has been announced to play the role of the Mother Superior, originally inhabited in the 1991 movie by everyone’s favourite, prickly grandmother, Maggie Smith. There is a certain irony to the news given the fact that when Whoopi last stepped onto the West End stage in 2010, she actually replaced the 77-year-old Sheila Hancock as Mother Superior, whilst the 26-year-old Patina Miller was dancing in the habit as Van Cartier. Whoopi will be taking over from the touring Brenda Edwards, who is almost 20 years her junior.

Social media musings have focused on the ages of the two leads. Is it believable that the Mother Superior is now younger than lounge singer Deloris Van Cartier when originally she was supposed to be some 20 years older, and arguably very much wiser? Is it believable that a 63-year-old would be on the run after an illicit affair with a Mob boss? Will the passing of the sands of time mean that the piece suffers from the “geriatric-isation” of the narrative? Will the dynamic of the piece change so much that the show will become unrecognisable?

This hasn’t been the first time the casting of an older actress has been questioned in this way. When Bette Midler stepped into the leatherette court shoes of the world’s greatest matchmaker, Dolly Levi, in the 2017 Broadway revival of Hello Dolly!, the same concerns were raised. Yes, the part was written for someone decades younger than the septuagenarian hoofer, and at the time (the 1960s) 70 was considered elderly. However, Midler put pay to the concerns of the New York press pretty succinctly on opening night and walked away with the Tony. Indeed, Carol Channing was playing Dolly, the role she originated in 1964, some 30 years later in 1994, still giving it her all, and still pleasing the fans. Even earlier than that, the 1966 Lincoln Center revival of Annie Get Your Gun featured the show’s original star, Ethel Merman, some 20 years after she first performed the role. It would appear that, during the Golden Age of musical theatre, if you had the vocal chops to sing the role, or at the very least the willingness to try, audiences respected that. It’s worth noting that the 1966 revival of Merman’s return was the only Lincoln Center televised production of that decade, albeit in an abbreviated, 90-minute version for NBC.

Indeed, Whoopi’s age has even formed part of the pre-publicity of the run, with Whoopi admitting that Deloris will be “older and more seasoned”, composer Alan Menken implying that Goldberg will add “new variables”, and producers making sure we all know this is a “one-off” with Whoopi donning the habit one last time. It’s almost as if the marketing is lined up to say, “Come on, folks, celebrate Whoopi before she hangs up that habit for good”.

So, why are we now so obsessed with the age of the leading performers, or rather more pertinently, why are we so obsessed with the ages of leading ladies? For it seems this is a debate particular to the age of women. Sondheim puts it brilliantly in his ode to survival “I’m Still Here”, which the inimitable Tracie Bennett sang uproariously in the 2017 National Theatre revival of Follies: “First you’re another sloe-eyed vamp, then someone’s mother, then you’re camp.”

The same can be said of the straight theatre, particularly the Shakespearean and Jacobean theatre, where the Juliets, Beatrices and the Portias generally remain fresh out of drama school, and the women reaching the prime of life are more often than not consigned to nursemaid, mother, or hag. Indeed, the majority of contemporary plays that feature a strong, and ageing, female lead do so invariably because age has something to do with the narrative and, if not, the critics usually tend to make it part of their review. Age concerns are not raised as often over at the Royal Opera House, or at the ENO, where the decades of training and maturity of voice are cherished, and the casting announcement of a middle-aged Tosca would struggle to raise an eyebrow.

The age debate also, invariably, never happens in the case of men. Yul Brynner played the King of Siam, intermittently, for 34 years, until 1985. Interestingly, with each and every production Brynner joined, his leading lady got younger. Closer to home, and rather more recently, we cheered the return of the 57-year-old Michael Ball to the 2019 Les Miserables concert-version, even though the role was originally played by the then 32-year-old Roger Allam at the Barbican in 1986. The role of Fantine, however, is played younger and younger, with the 27-year-old Carrie Hope Fletcher taking the 2019 concert version role once inhabited by the then 37-year-old Patti LuPone in 1986. Age, it seems, really is nothing but a number for the Javerts, Valjeans, and Todds. It can go either way without fear of successful reprimand.

Pre-publicity for the production also states that this will be a new version for the stage, which poses the question will Deloris Van Cartier’s autumn years become part of the narrative? Will she become a contemporary of the Mother Superior? Will her age be front and centre in the narrative? My answer to all of these questions, and many more surrounding all of Whoopi’s 63 years, is – quite frankly – who cares? Deloris Van Cartier is a comic creation of genius; she was in 1992 and she sure will be in 2020. My final thought is, whether you’re a Nellie Lovett or a Sweeney Todd, a Cinderella or Prince Charming, let’s all take a leaf out of 86-year-old Joan Collins’s book and accept that age is only relevant if you are a bottle of wine!