Ruth Wilson reunites with Ivo van Hove to star in his adaptation of Jean Cocteau’s The Human Voice for Three Weeks only at the Harold Pinter Theatre. 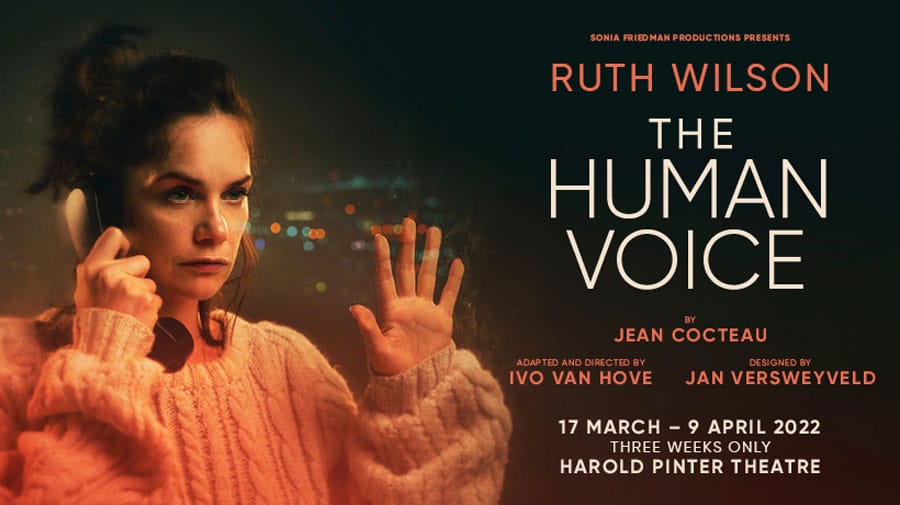 Sonia Friedman Productions today announces that Ruth Wilson will star in Ivo van Hove’s adaptation of Jean Cocteau’s The Human Voice, which he also directs with design by Jan Versweyveld, originally produced by Internationaal Theater Amsterdam. The production opens at the Harold Pinter Theatre on 22 March, with previews from 17 March, and runs for three weeks only until 9 April.

Two-time Olivier Award-winner Ruth Wilson stars in The Human Voice – the searing story of a woman’s heartbreak over the course of a final phone call with her former lover.

Reunited with groundbreaking director Ivo van Hove for the first time since their acclaimed Hedda Gabler, Ruth Wilson returns to the West End for 31 performances in this explosive reimagining of one of theatre’s greatest roles.

Jean Cocteau’s stunning monologue is more illuminating about love and loneliness than ever.”

The Human Voice tickets are now on sale with tickets from just £5, and over 300 tickets at each performance at £25 or under.

Ruth Wilson said today, “I am absolutely thrilled to be collaborating again with Ivo and Jan on this wonderful, heartbreaking and deeply human monologue from Jean Cocteau. A woman alone with only her phone as companion, Cocteau explores the nature of intimate relations through inanimate objects. In a world in which are all addicted to and dependent on our phones, this play from the 1930s couldn’t feel more prescient. Ivo is the perfect director to bring Cocteau’s play to life as both share a love of the absurd as a mirror to truth.”