In celebration of William Shakespeare’s 456th birthday, the Royal Shakespeare Company (RSC) has today unveiled the results of its largest ever digital celebration by audiences. 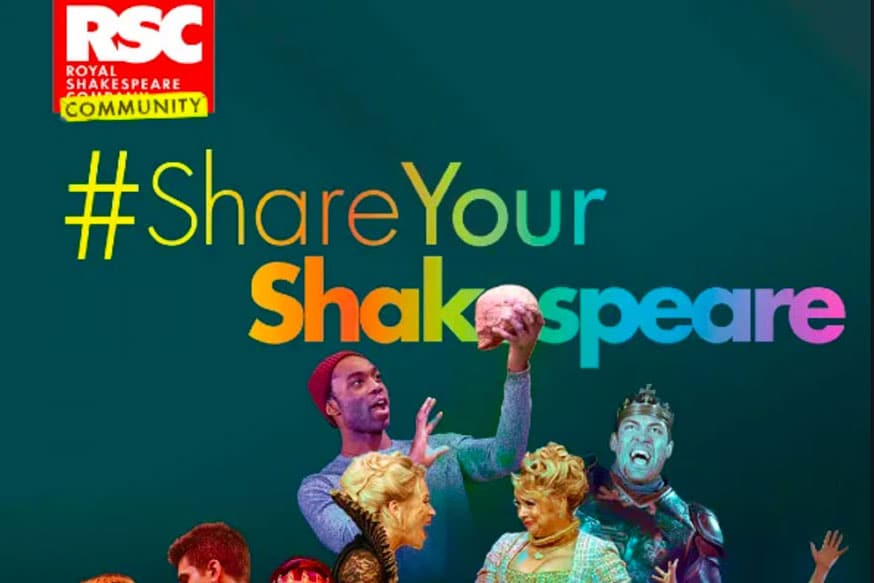 Launched in partnership with The Folger Shakespeare Library, the #ShareYourShakespeare campaign launched by the RSC challenged audiences everywhere to share their love of Shakespeare in whatever way they chose, whether that be performing a speech, baking a cake, painting a picture, serenading a neighbour over the garden fence or teaching their dog to bark Macbeth.

The campaign has, so far, attracted over 1000 submissions from audiences around the world including community theatre-makers, amateur companies, schools, families and working actors with entries received from as far as the USA, Russia, South Africa and Saudi Arabia.

Notable entries received as part of #ShareYourShakespeare include:
• Romeo and Juliet – An emoji love story
• Lockdown Macbeth – a micro-animated tragedy…featuring baked bean-tin castle and cacti ‘Burnham Wood’
• A Midsummer Night’s Dream performed by George the Cat
• Lego Shakespeare featuring ‘Romeo and Juliet’ by The Kings School, Devon and The Tempest by Finlay Aldridge (age 11)
• A family ‘zoom’ chat with King Lear, Goneril and Regan
• Oeuf-philia and Hamlegg – Creative egg crafts from across the cannon
• Romeo and Juliet meets U2 – A musical rendition of the Prologue set to guitar
• A photograph of HRH The Prince of Wales, President of the Royal Shakespeare Company, performing the role of Macbeth, age 17
• A Shakespearean/Star Wars mash up from The Shakespeare’s Birthplace Trust
• All The World’s A Stage…for women too written by Harriet Walter and William Shakespeare
• The Tempest re-imagined as a graphic novel
• An A to Z of Shakespeare…in Scrabble
• The Great Shakespeare Bake Off – Featuring Lady Macbeth’s ‘out damn spot’ biscuits, cookie-cutter Romeo and Juliet and a drowned Ophelia…immortalized in icing!

A selection of the most creative, surprising and inspiring contributions have been collated digitally in a shared celebration of Shakespeare, which can be viewed at the RSC’s website and You Tube channel.

The #ShareYourShakespeare campaign launched online with a specially-recorded performance of ‘The Seven Ages of Man’ speech by Doctor Who and Broadchurch star David Tennant, who last appeared at the RSC in Gregory Doran’s 2013 production of Richard III. Joining David for the video broadcast were Associate Artists Charlotte Arrowsmith, David Bradley, Stephen Boxer and Paapa Essiedu, who played the title role of Hamlet in Simon Godwin’s 2016 production for the RSC (soon to be broadcast on the BBC). Other RSC alumni and Associate Artists who took part included Fleabag star Ray Fearon, award-winning British stage and film actresses Jane Lapotaire and Katy Stephens and David Threlfall, star of the RSC’s 2016 production of Don Quixote and the long-running Channel 4 TV series Shameless.

Gregory Doran, Artistic Director of the Royal Shakespeare Company, said: “We have been overwhelmed by the creativity and resourcefulness of those who have contributed to the Share Your Shakespeare campaign so far.

“Whether re-creating Romeo and Juliet in lego, reciting Hamlet to your cat or re-enacting the Battle of Agincourt in the back garden, we’re thrilled to see so many embracing their inner creativity in quarantine through their shared love of Shakespeare.

“Shakespeare himself was no stranger to self-isolation. When he was just starting as a playwright in London, the theatres were commanded to close, at which point Shakespeare wrote two magnificent narrative poems, Venus and Adonis and The Rape of Lucrece. Then again, when the Globe was told to haul down its ﬂag and bolt its doors again in 1609, he published his collection of 154 sonnets.

“For those of us trying to be as creative as possible in lockdown, Shakespeare’s example is a little intimidating. Nevertheless, we can all play our part, big or small, in coming together to celebrate and connect with each other on Shakespeare’s 456th birthday.

The campaign will continue over the coming weeks. Those who would like to contribute are asked to film or photograph their Shakespeare in any way and upload it to Instagram, Twitter or Youtube, tagging @theRSC and using the hashtag #ShareYourShakespeare. The RSC will continue to share any entries via social media throughout the month of May 2020.

The Royal Shakespeare Company is a charity and our mission is to transform lives through amazing experiences of Shakespeare and great theatre.

MAKE A DONATION TO THE RSC