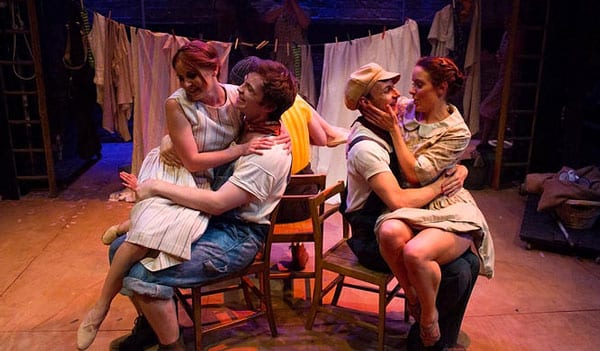 Is a kiss with a fist better than none? Rodgers & Hammerstein’s Carousel: From 1945 to 2014 in a single hit

I know what you want me to do.

You want me to write a review – to churn out something interesting and witty about Morphic Graffiti’s production of Carousel at the Arcola. And yes, I can attempt to satisfy you in that to an extent – lest I fail entirely in my role as reviewer/critic/ writer, or whatever it is you wish to call me.

I can tell you about the space – a space that, when entered, inspired involuntary and audible gasps from its unsuspecting audience (somewhat attributable to the humidity, sure, but mostly due to the theatre’s radical transformation), the band perched high overhead preparing to chirp, and more ropes, pulleys and levers than PGL.

Stuart Charlesworth’s design is simple and yet sumptuous, suggestive rather than literal; it’s the sort that’s unassuming on the surface (tables, chairs, things that spin and ladders) but which – seemingly by sorcery and witchcraft – transports its audience seamlessly between scenes. By rejecting the conventional fairground get-up, Charlesworth instead asks the audience to consider the symbolic nature of show’s setting, making us more accepting of act two’s otherwise clunky shift from Earth to Heaven. A few inevitably awkward sight lines aside, and the scene is set.

I can also tell you about the direction – that of Luke Fredericks and his assistant James Hume, and of musical director Andrew Corcoran. The thought and detail that has been poured into this production – cleverly repositioned to coincide with the end of World War II – means that each square centimetre of the space brims with meaning. You can’t help but pay attention to the lyrics, or feel the ripples of emotion as the plot twists and contracts in its unusual and imperfect way, dragging its unfortunate and difficult characters with it. Corcoran’s pensive expression during the cast’s climactic a cappella reprise of You’ll Never Walk Alone – like that of a coach during the final minutes of a close match – is indicative of the passion behind this reincarnation of Hammerstein’s legendary score.

I could tell you about the breath-taking overture, expatiate on Susie Porter’s mind-blowing ballet, Lee Proud’s choreography, Joel Montague’s voice. And I want to. I really want to. But there’s something else I’ve got to do first. Brace yourself – I’m about to spoil the party.

Richard Rodgers’ favourite musical, with its “meaningful, moving, beautifully written and tender” lyrics, “the best musical of the 20th century,” is also – let’s face it – hideously sexist. Thanks to the work of feminism I’m at liberty now to express my views and, frankly, I’d be neglecting my role as a woman if I failed to mention the acute discomfort I felt at times during Carousel.

The problem can mostly be attributed to history; Carousel is ‘of its time’ and faithful to it too. It’s harmless in parts; the women appear to appreciate the men’s advances – as a welcome distraction from the laundry – and are far from impressed with the solipsistic hero’s behaviour. However the male characters are easily forgiven, treated with respect and regarded with admiration, regardless of their behaviour. When Louise turns to her mother and agrees with alacrity and resounding sincerity that the fist of her father “doesn’t hurt at all,” the hope of a better future for women is diminished. Really, what IS the use of wond’rin?

Unfortunately for this production of Carousel, too many people still share in these views, causing lines like these – delivered with such acceptance and adoration – to land with an almighty thud. Being a musical too, Carousel is resplendent and frivolous. It basks in its context with joyous abandon, even pride, without the suggestion, glimmer, of remorse or apology. The humiliation of the compromised female characters is accompanied by souring melodies that are hard to argue with. It’s easy to be blinded, to be swept up in the dances, the ebullience and the celebration. But, for me, it was like walking smack into an opaque and miserable wall of misogyny. Unfortunately, this curtailed my ability to fully appreciate the plot’s other (beautifully painted) layers – the love, hope, family, grief and friendship.

This isn’t to the detriment of the creative team; they’re not responsible for the content of Ferenc Molnar’s play. Nor is it their responsibility to heal thousands of years of harm. They’re just putting on a show (and a good one too!) However, elements of this story, when retold for a 2014 audience, need to be re-addressed, or at the very least acknowledged.

Fredericks has made some attempt to remedy the issue through the character of Nettie – an independent business owner and potential female role model – but this doesn’t quite do the job. There’s further directorial scope – particularly in act two with the birth of a new generation, and in the delivery of the show’s deleterious closing lines – to imply disapproval. Without this, I remain unconvinced and unable to see what Carousel has to say to a contemporary audience.

Sexism is – in some parts of the world – different now: latent, disguised. But you don’t need me to tell you that it’s still a problem. Florence (of the Machine variety) sung in 2008 that “a kiss with a fist is better than none.” Is she speaking for Julie Jordan? Are we still making excuses for domestic violence and wilfully allowing women to suffer subjugation?

In a society ridden with prejudice, why choose to retell a story as if everything is mended? There’s no need to revive misogyny. It’s still here and never went anywhere. It’s been on its own carousel. Round and around it goes, receiving the occasional lick of paint or coat of oil.

What’s worse is that we’re so used to seeing reduced women on stage, particularly in musical theatre, that many audience members won’t bat an eyelid (not until they weep at Billy’s death anyway). But instead of buying another token, hopping on for another ride, maybe it’s time we got off?

Many people won’t be offended in the slightest by Carousel. They’ll leave the theatre with a spring in their step, humming the melodies. And that’s great. It’s an easy production to enjoy. But considering the statistics, the day-to-day prevalence of sexism, the fact that women are still paid 18% less on average than men, and the number of women trapped in abusive marriages, I wasn’t able to do the same.

So you can roll your eyes, tut at me, groan in exhaustion even, but someone’s got to say something.

Carousel is at The Arcola Theatre from June 18- July 19th.