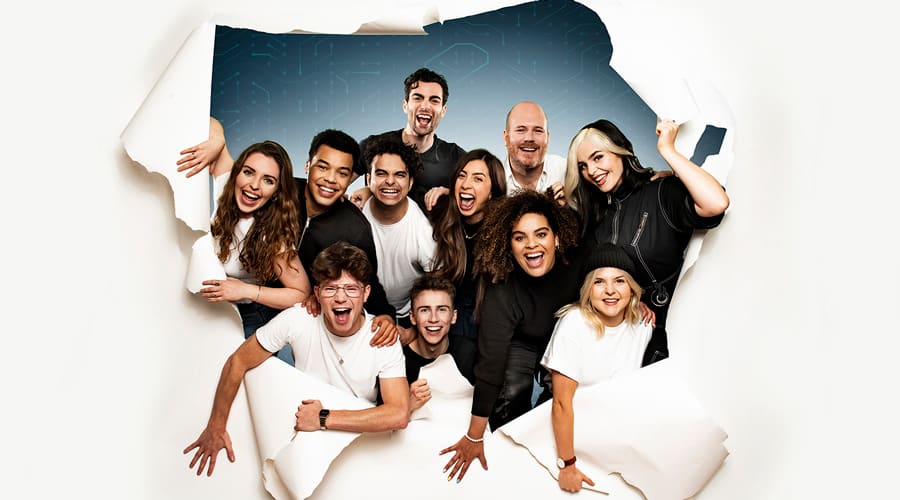 When the musical Be More Chill opened in a small theatre in Red Bank, New Jersey nearly five years ago, it looked like it would have little life after its four-week run. With an upbeat original score and lyrics by Joe Iconis and book by Joe Tracz, it tells the story of a high school student whose life is transformed by a pill containing a supercomputer, based on a bestselling novel by Ned Vizzini. But after a lukewarm review in the New York Times, there was no interest from producers willing to take it further commercially so Iconis agreed for it to be licensed out for community productions. One of these productions brought the show to the attention of producer Jerry Goehring who discovered it had a growing fanbase thanks to a cast recording. (One of the early fans was BritishTheatre.com where the recording was reviewed four years ago.) Goehring realised the show’s future potential while meeting Iconis over lunch, he recalls. “He’s like, ‘Jerry, you’re not going to believe this but there are 10 million streams of our music’. All of a sudden people are listening to this story. So it’s like, why don’t we take this and do it Off Broadway.” Goehring, who loves supporting new artists, joined forces with producer Jennifer Ashley Tepper to open Off-Broadway in 2018.

After a two-month run, it transferred to the Lyceum Theatre on Broadway last year, running for six months and gaining a Tony Award nomination for best original score. Now it is set to open at The Other Palace in London from 12 February, with another production planned for Chicago from April. There has even been talk of adapting the show into a film. With streams of the tracks now at 350 million, Goehring says he still finds it “unbelievable” that, after that initial hiatus, the show has been such an international hit. “Every time we put a show up, we dream a little bit, we’re like, ‘I hope a lot of people are going to see my show, hear the story for a long time’, and what happens most of the time is you do your show for a run – three weeks, six weeks, eight weeks, whatever it is – and it’s over. Be More Chill for us has been the exception to that rule. It’s absolutely incredible.”

For the London production, they have worked with casting director Will Burton to find a cast of mainly young performers, led by Scott Folan as the pill-taking geek, Jeremy. Alongside him, there are two former “queens” from Six the musical, Renee Lamb as Jenna and Millie O’Connell as Chloe, plus Blake Patrick Anderson as Jeremy’s best friend, Michael, and Miracle Chance as the object of Jeremy’s affection, Christine. The supercomputer, known as The Squip, is brought to life by Stewart Clarke whose credits include last year’s Fiddler on the Roof, The Rink at Southwark Playhouse and Assassins at Menier Chocolate Factory. The cast also includes Eloise Davies, Christopher Fry, James Hameed and Miles Paloma.

Many of the creative team remain on board from New Jersey including choreographer Chase Brock, music supervisor Charlie Rose and director Stephen Brackett. “It’s been a really amazing opportunity for myself and my collaborator Chase Brock to come here and work with a bunch of artists from London,” Brackett says. “It’s been a really wonderful opportunity for us to take a piece that we feel that we know really, really intimately and add new voices to the room. We’re finding more questions by just having new collaborators on the piece that, in a really beautiful way, has kept opening up the piece for us. It’s an absolutely lovely experience to keep working on something that keeps revealing itself to you over time.”

Although the musical is based on a novel for young adults, the creative team were attracted to the story because it tackled themes that take it beyond being just a high school musical, Brackett points out. “What I love about this musical is that it takes this genre that is sort of familiar, this high school coming-of-age story, this aspiring loser story, and filters it through a heavy dose of sci-fi genre which allows us a different access into that story. Even sci-fi aside, I feel like this is a piece about humanity. It’s a piece about – and I relate to this – how we can let our own brains get in our way of achieving what we want to achieve. As an adult man, I have voices that are like, ‘You can’t do that’, ‘You’re going to screw it up’, or ‘Don’t get in the way’. Those are voices that, if we let them overtake our brains, can really, really get in our way, and what this musical does is note that this is what part of being a human is, this is what part of being alive is.”

From watching a few scenes in the early stages of rehearsal, it looks like Be More Chill will be filled with quirky humour and charm alongside darker elements. Brackett adds: “This is a piece with a really profound sense of joy to it. It tells a story and honours the kind of pain that we go through in our everyday life but spins it with a real sense of optimism and a sense that we can work through these issues. It has a real sense of placing the value on human connection. We live in such a scary moment and it’s so easy to feel scared every day and so easy to feel alienated every day, that I feel really excited to be putting out a piece that’s saying, ‘Form relationships, be brave, make connections’, and does it in a really joyful way.”

Be More Chill runs at The Other Palace in London from 12 February to 3 May 2020.