47 years after he created the sci-fi stage and film cult favourite The Rocky Horror Show, Richard O’Brien has taken a rare acting role to star in The Barren Author. 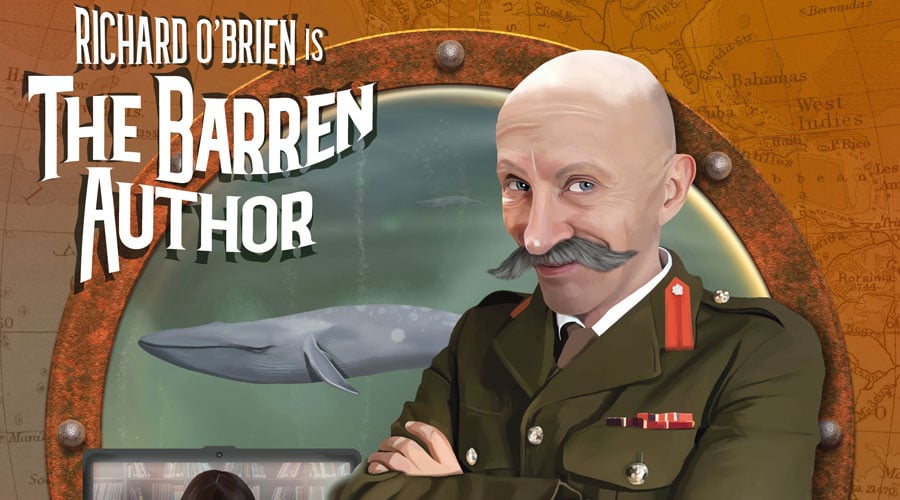 Inspired by the fantastical stories of Baron Munchausen, the six-part audio series will star Richard O’Brien and co-star Sophie Aldred.

O’Brien plays The Brigadier, who is telling the tale in sessions via video calls to the mysterious Smith (Sophie Aldred). But is she all she says she is, and what – in fact – is she? A publisher, a psychiatrist, or in league with forces of evil?

The original Munchausen stories about a fictional German nobleman first appeared in 1785 in the book ‘Baron Munchausen’s Narrative of his Marvellous Travels and Campaigns in Russia’.and told of his impossible achievements as a sportsman, soldier, and traveller including riding on a cannonball, fighting a 40-foot crocodile, and travelling to the Moon.

‘The Barren Author’, written by Paul Birch, produced and directed by Barnaby Eaton-Jones, is not a literal adaptation of the Munchausen stories but takes instead the satirical, provocative and absurd spirit of the original tales and reimagines them for 2020.

Richard O’Brien said: “I find it enjoyable being allowed to play someone who views the truth as a moveable feast. Should I improve on doing so, I shall, most likely, turn my future ambition towards running some great nation; or other.”

Sophie Aldred said: “This was the best fun I could have hoped for in the airing cupboard all lockdown! I loved being the straight woman to Richard O’Brien’s ridiculous character’s funny. I can’t wait to hear the whole thing spliced together.”

Producer/Director Barnaby Eaton-Jones said: “I’ve always loved the madness and satirical bite of the Baron Munchausen tales and was bowled over by Terry Gilliam’s film version in 1988 as a youngster, but I’d had an idea kicking around for a while of taking the core concept, keeping some of the well-known elements, and updating the tales in a contemporary setting. I wanted to keep the surreal nature and that blurring of fantasy and reality (is it real or is it not?). I am very lucky to share a sense of humour and a close friendship with the writer I asked to adapt my treatment, Paul Birch, and his six episodes really have flown off into a direction that’s extraordinary. The great thing about audio is all of this scope can be achieved, whereas would have been astronomical for television or film! Right from the very start, I could hear Richard O’Brien’s voice in my head as our main character and I was so bowled over that the scripts excited him enough to take on the role (and suggesting his own creative enhancements to them – which is always the sign of an actor properly engaging with the material). Pairing him with Sophie Aldred, who’s a delight as his confidante and possible future nemesis, just created the perfect chemistry for a must-listen-to-tale in six half-hour episodes. My fingers are crossed for people loving it enough to ask for another series of escapades!”

The Barren Author is written by Paul Birch, directed and produced by Barnaby Eaton-Jones, sound design by Joseph Fox, Music by Abigail Fox, songs by Darrel Maclaine, design and illustration by Robert Hammond and sound engineering by Nigel Masters at The Boat Shed Studios, New Zealand.

BUY YOUR COPY OF THE BARREN AUTHOR