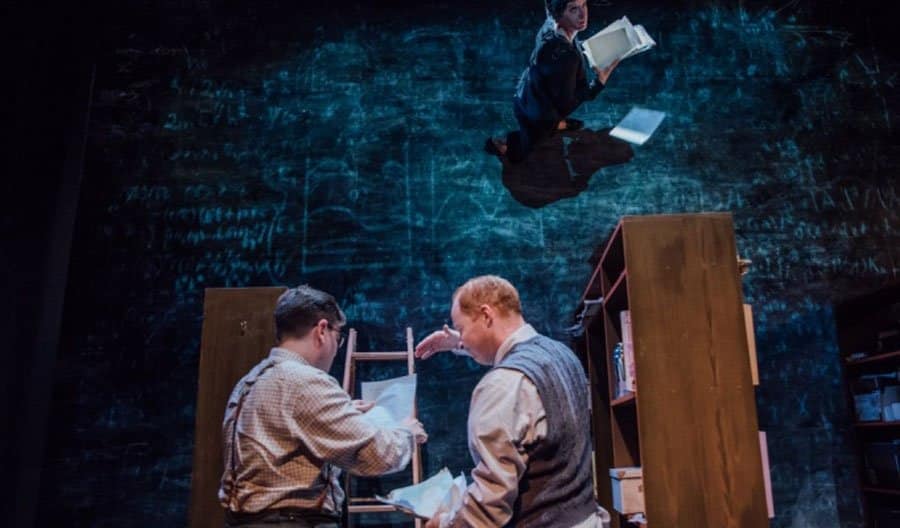 In Yuval Noah Harari’s international bestseller, Sapiens: A Brief History of Humankind, human progress is unconventionally seen as less of an upward curve and as something more tangled as industrialisation and technology hurtle us towards potential extinction. This is at odds with the more uplifting theories of mathematician and science historian Dr Jacob Bronowski whose highly successful 1973 TV series and book, The Ascent of Man, saw humanity as constantly improving towards a more utopian future. These two visions are the starting point for New Diorama Theatre’s inventive, engaging show Secret Life of Humans, which examines ideas about how far homo sapiens has come over the past 150,000 years – and how little we have changed from the hunters living in caves.

Opening with a lively mini lecture by Stella Blue Taylor that sets out the premise, the show quickly segues into a part-fictional story based around Bronowski’s life. Taylor plays Ava, a young behavioural scientist having a Tinder date with a man, Jamie, who turns out to be the grandson of Bronowski and heir to all his papers. He reveals to her a locked room in his grandparents’ house where they find journals and correspondence that reveal details of Bronowski’s morally murky wartime career helping the Ministry of Home Security to use maths to improve the effectiveness of RAF Bomber Command.

Darting back and forth between World War Two and the present day as well as Bronowski’s later years before his sudden death in 1974, the play uses his story to explore how our modern traits such as fear and imagination can be traced back to our hunter ancestors. It is a wonderful piece of storytelling that is thought-provoking and often funny, directed with élan by its writer David Byrne with Kate Stanley and devised by the company.

Taylor and Andrew Strafford-Baker are excellent as Ava and Jamie alongside Olivia Hirst and Andy McLeod, with Richard Delaney standing out as the well-intentioned but troubled Bronowski. Against a remarkably versatile set by Jen McGinley, the show is visually arresting thanks to Zakk Hein’s projections, Geoff Hense’s lighting and, unforgettably, aerial design by John Maddox. The result is an entertaining look at some serious questions about where humanity has come from and what it has become, reminding us disconcertingly that, just as the first human beings walked on earth 2.4 million years ago, one day will inevitably see our final footsteps.