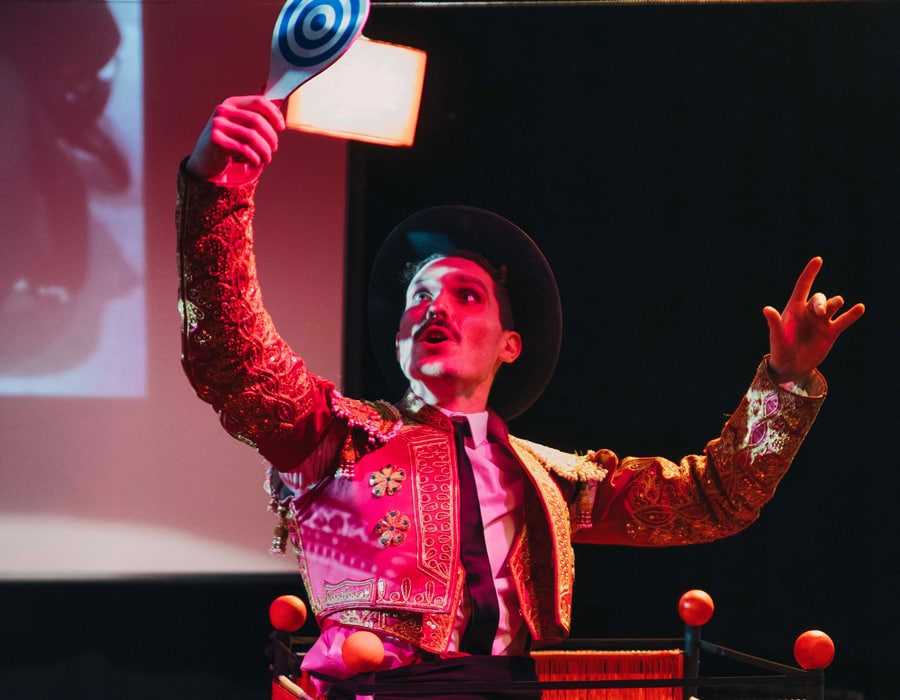 This is the final instalment of Foreman at Fifty, a sequence of productions celebrating the astonishing dramatic creations of the avant-garde American theatre-maker, Richard Foreman, of which to date the now 82-year old writer-director-producer has produced… fifty.  If anyone is an expert on his curiously challenging and yet also strangely beautiful works, then it is Patrick Kennedy, an occasional director who, with his own ‘Phenomenological Theatre’ company, has stuck his neck out to champion a string of these often bizarre and frequently baffling stage works.  In this, he has benefitted from the hugely productive relationship he has with the New Wimbledon Theatre Studio, where he has already presented several other key works by the writer.  Foreman’s art is like no-one else’s, and mounting it, particularly with the aplomb evinced by Kennedy, is no small achievement.   Kennedy’s is a striking and memorable presence in the UK theatre scene, made all the more remarkable for his ability to draw into his projects new talent ready to embark upon each production and embrace all the difficulties they present. 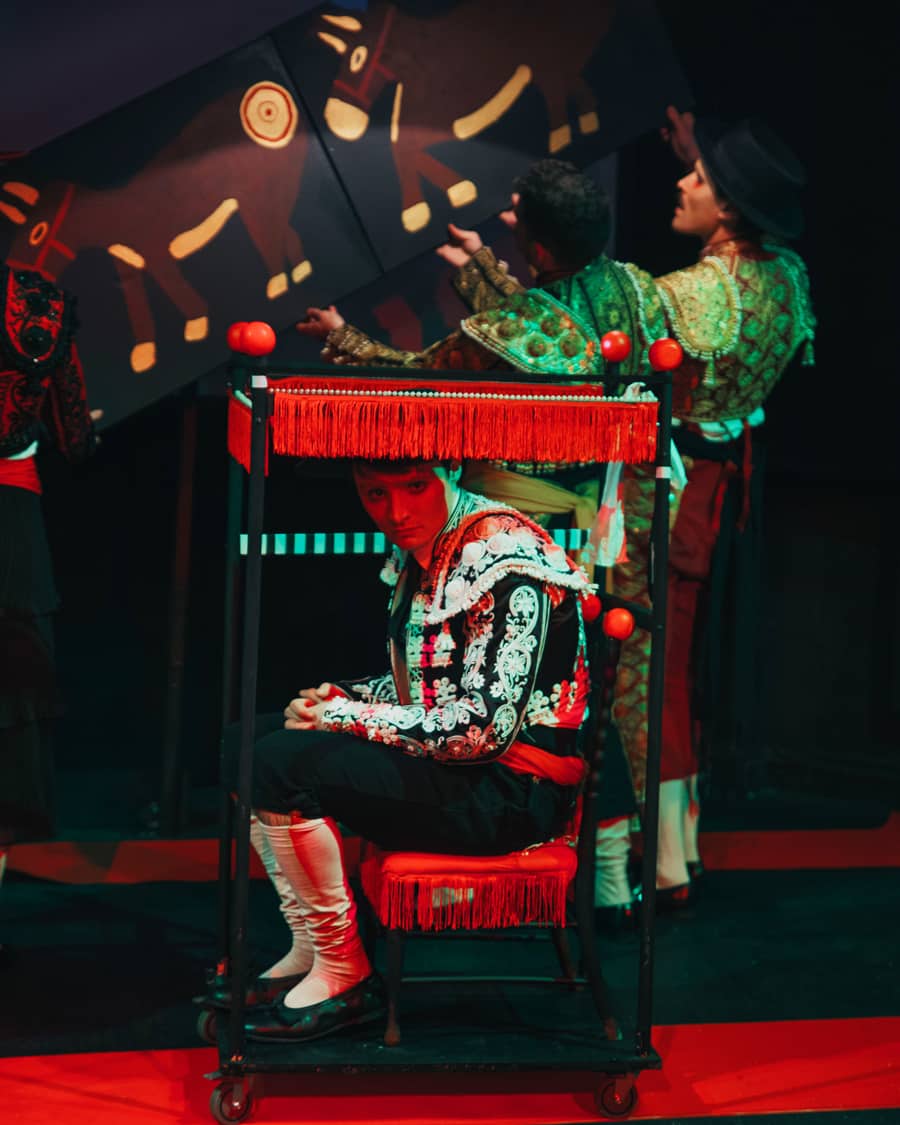 In this case, five sparkly-clad toreadors move through meticulously poised tableaux, while we also see film clips created specially for the occasion by Kennedy himself – who also designs, lights, choreographs, and – of course – produces.  In previous productions he has also provided voice-overs – he is, in fact, not only perhaps the closest thing we have in UK theatre right now to a living, working theatre auteur, but also a formidable polymath.  Meanwhile, a sound-track (also of Kennedy’s making) blares away, featuring everything from a Hungarian politician’s speech mixed with Bartok, to – I think – some of the musical criticism of Theodor Adorno (or someone like him), holding forth upon another artistic iconoclast, Beethoven.  The intellectual rigour and aesthetic elegance with which all this is finished is flawless, all the more astonishing given the fact that the company is hardly generously funded.  But the ‘New York loft’, spartan feel of the production is entirely in keeping with the place of its genesis, Foreman’s own Ontological-Hysteric Theatre, founded with the mission in mind “of stripping the theater bare of everything but the singular and essential impulse to stage the static tension of interpersonal relations in space.” 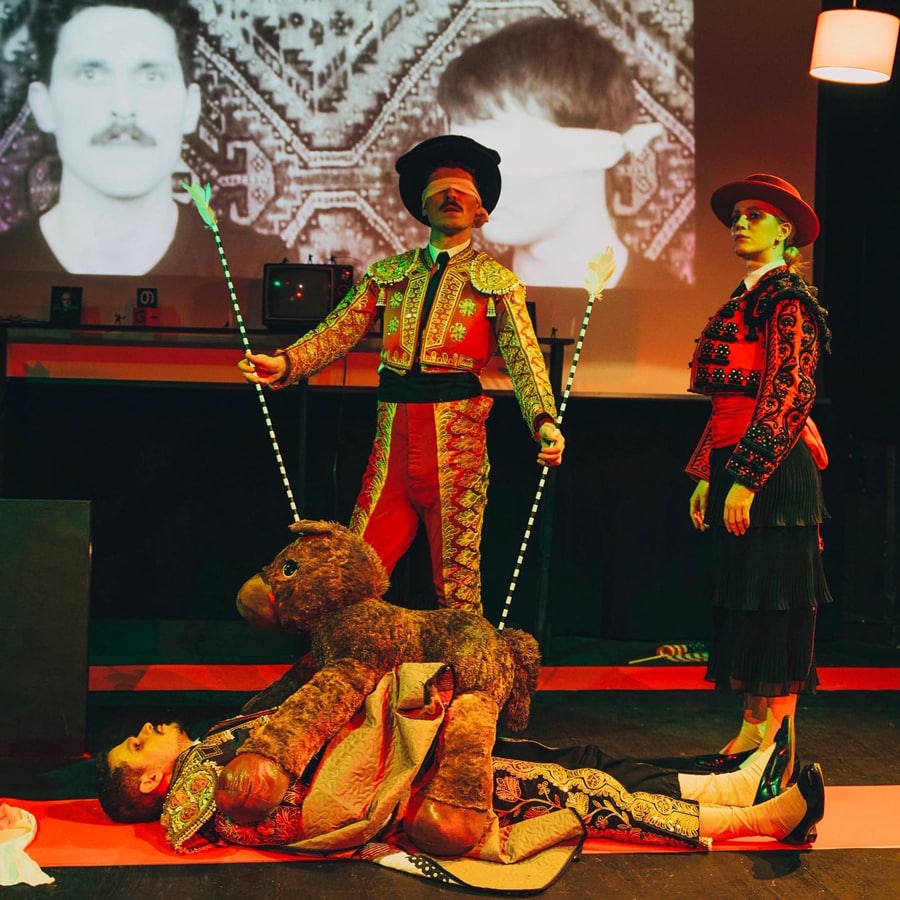 And what we have here is an object lesson in how to achieve this.  There is plenty of tension held in frozen moments executed by the bejewelled players: Davey Green; Tommy Papaioannou; George Seymour; Georgia Small; Nikitas Stamoulis.  Oddly repetitive and yet never quite monotonous in their movements, their configurations keep hinting at some elusive ‘meaning’ in this weird world of non-events and inexplicable consequences, and yet nothing is hidden from us – apparently – all is simply ‘there’ for us to witness and digest.  But rather like a ‘happening’, this is not theatre served up with any simple narrative yarn to hold it together: it is experience shorn of context and coherence.  It might infuriate some, but over the little more than an hour of the production it exerts, I find, a curiously pleasant charm. 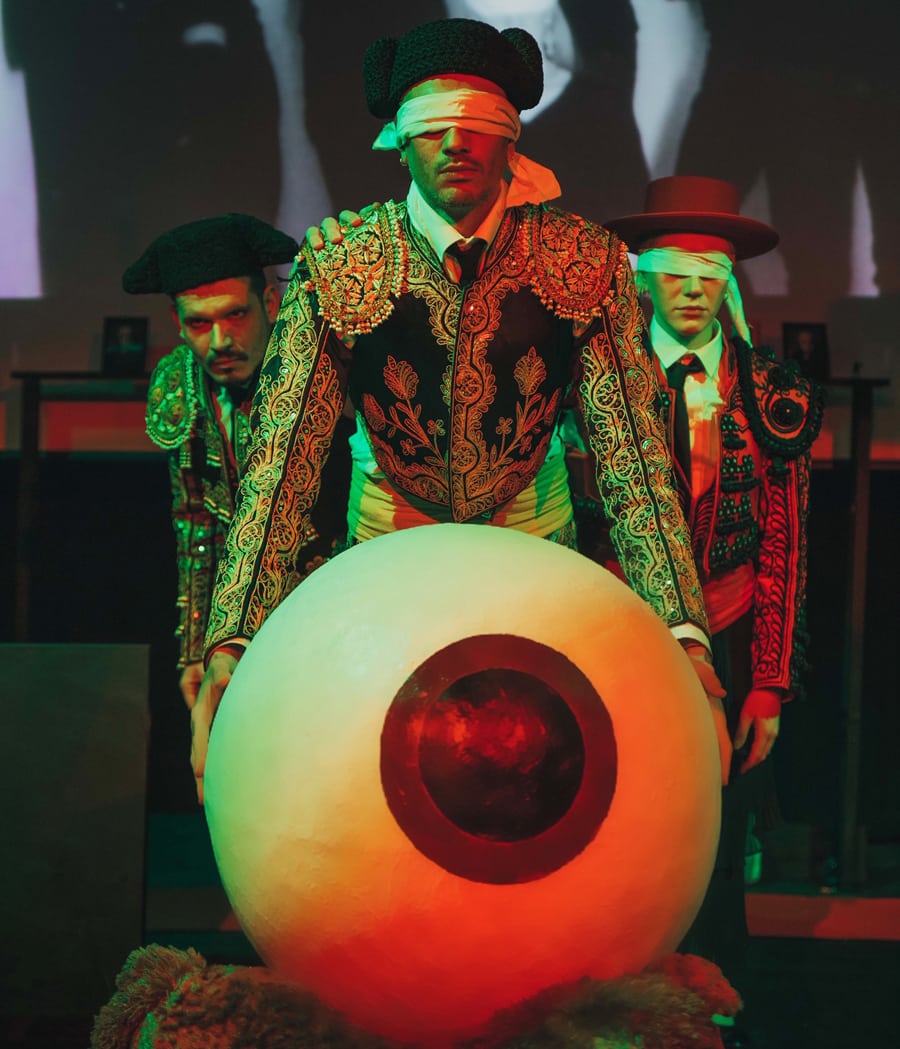 Yet, as far as I can tell, Foreman, for all Kennedy advocates him, is ignored by the British theatrical establishment.  He is hardly ever seen on our stages, and little known.  Nevertheless, undeterred by this side-lining, he has a small, niche, extremely loyal and devoted following, and – most importantly – a sound ethos under-pinning all his activities (elaborated in the ‘playbill’ programme); so, this remarkable theatrical artist keeps going, his fervour and energy undimmed by the lack of popular acclaim or artistic reward.  Having seen half a dozen of his works by now, I have received an education in what theatre is and what it can accomplish second to none.  Very few people in the country, as far as I am aware, are doing work anything like as radical or revolutionary as this.  Is it a Sixties throwback?  Possibly, but then Foreman came of age at the dawn of that magical decade, and was one of the people who defined it.  So, I welcome – again – another forthright and confident production from this unique artist-led company.