Mark Ludmon reviews new musical You and I, a quirky contemporary musical from Colla Voce Theatre Company at the Edinburgh Fringe 2019. 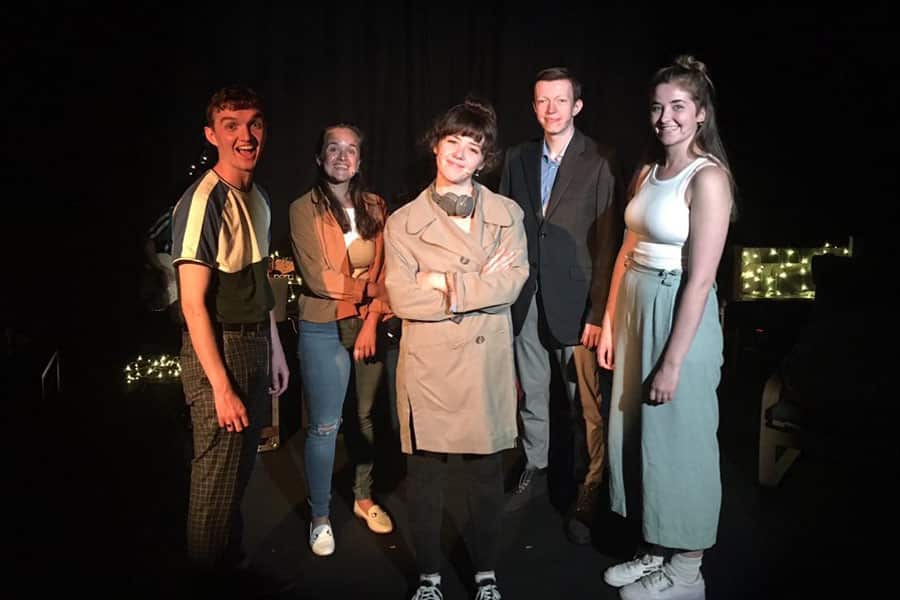 Colla Voce theatre company are developing a reputation for creating quirky contemporary musicals. Two years ago, they gave us Buried, a wickedly dark musical about the dating challenges for a couple of sociopathic murderers. This year, the team featuring writer Tom Williams and composer Cordelia O’Driscoll have come up with an equally unconventional musical that sees a woman overcome her isolating anxiety with the help of a robot called Robert.

Robert himself insists he is not a “robot” but a highly advanced piece of artificial intelligence. Packed in bubble wrap and programmed to serve, he is unexpectedly delivered to the home of Fran, a young composer and musician who has cut herself off from the world. With headphones permanently clamped to her head, she has become invisible with no real friends apart from two self-absorbed flatmates. The only one looking out for her is her sister Alice, Robert’s creator, but even she seems to only have time to leave the occasional voicemail. Fran quickly bonds with Robert, who offers her social interaction but in the comfort of her own home and without human contact. The real catalyst for her change is the arrival of an uninhibited next-door neighbour, Ian, who leads her into the dangerous territories of the seafront promenade and karaoke at the Fox and Slug.

A highlight of the show is a very funny performance by Laurence Hunt as Robert, who is super-intelligent but like a painfully naive man-baby. He provides plenty of big laughs as he learns in faltering fashion about the world, from pencils and porn to astronomy and toilet paper. He has a perfect foil in Lindsay Manion who is engaging as Fran, struggling to break free of her self-contained routine. With echoes of Julie Walters, Cara Withers wins a laugh with every line in a number of roles including flatmate Tamé – not “Tammy” – alongside fellow multi-tasker Martha Furnival. As Fran’s flatmates from hell, these two slink and glare across the stage like evil stepsisters from a fairytale. Completing a cast crammed onto a tiny stage, Will Taylor is suitably wacky as the carefree Ian who is introduced to us with the typically offbeat song, “I Hit You With My Car”.

The songs have a lot of charm, from sharply comic to more touching tunes such as the sweetly wistful title number. With O’Driscoll as musical director, the three-strong band combine guitars with viola for a pop sound with an emotional heart. The sound levels were a little off the night I saw it, with voices and instruments occasionally over-amplified, but hopefully this is settling down as the run continues. Under director Elin Schofield, You and I is a delightful comedy, with a cheeky streak, counterpointed by a more poignant tone about dealing with loneliness and loss.

BOOK TICKETS FOR YOU AND I