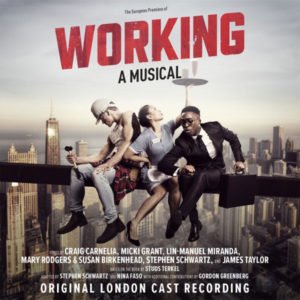 in 1974, Studs Terkel released a book called Working: People Talk About What They Do All Day and How They Feel About What They Do in which he interviewed people from different occupations. Stephen Schwartz and Nina Faso moulded a book out of these interviews and with the help of some of the greatest songwriters in the US created a concept msuical called Working where they bought a cross-section of characters to the stage.

Since that time there have been some small revisions to the show and this latest revision brings Lin-Manuel Miranda of In The Heights and Hamilton fame into the mix adding two new songs to the show. This recording is the London Cast Recording of the show seen last year at the Southwark Playhouse.

Working ‘works’ pardon the pun when the characters in each song come alive and when you look past the theatricality of the show itself and the truth of each character becomes paramount and this recording achieves that in droves. Take away the physical production and you realise that these are substantial character profiles and they stand alone or as a whole. It’s no wonder that so many songs from the show have become cabaret and audition standards.

Highlights on this recording for me include Dean Chisnall’s lyrical The Mason, Gillian Bevan’s fiesty waitress singing It’s An Art, Krysten Cumming’s undervalued housewife singing Just A Housewife, Liam Tamne and Siubhan Harrison as carers in one of Lin-Manuel Miranda’s new songs A Very Good Day,  and the ensemble of Cleanin’ Women. Peter Polycarpou’s rendering of Fathers and Sons is on par with the classic Harry Chapin song Cats In The Cradle.

Working is one of those shows that has simmered away with numerous productions around the world. This new cast album is of such a high standard that there will doubtless be many new productions of Working around the globe as a result of this recording. It’s a first class calling card for this undervalued gem of a show.