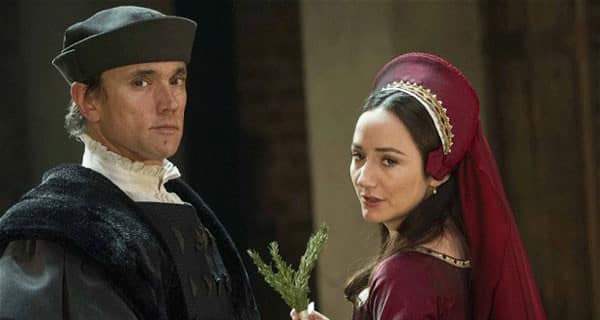 Wolf Hall and Bring Up The Bodies, Hilary Mantel’s Booker winning novels about the fall of Wolsey and the rise of Cromwell in the Court of Henry VIII were richly satisfying reads, full of fascinating observations, wonderful characters, meticulously researched and presented with prose that pulsed with life and energy but still clearly evoked the historical period; a masterpiece of modern writing. Now playing at the RSC’s Swan Theatre at Stratford-Upon-Avon is Mike Poulton’s adaptation of Mantel’s great works, under the direction of Jeremy Herrin.

There has never been anything as miraculous, enjoyable and so perfectly done at the RSC since it opened the renovated theatres. This glorious production should transfer to the West End and play for a long time before going out to the world.

It is delicious, delightful and damned good theatre. Everyone should see it and revel in its delights.

Herrin and Poulton combine with Christopher Oram (spare but useful set, magnificent costumes), Paule Constable (whose lighting design transforms the Swan Theatre in ways it has never been transformed before) and Stephen Warbeck (wonderful, haunting music) and an almost faultless cast to create a truly theatrical world in which Mantel’s vision for the characters can throb and shimmer with life, energy and enthusiasm. Much of the dialogue is hers – and from her beaming countenance tonight, she is pleased with the result. As she should be.

The doubling up of characters is done perfectly so there is no jarring; at all times it is clear exactly who everyone is – and there are dozens of characters at play here. Herrin has a sure, clear hand as a director – everything is economically done, but appropriately. When there needs to be pageantry, there is; when a dungeon is needed, there is a dungeon; when a difficult conversation occurs at sea in the pelting rain, it does. The different worlds of Court and Clergy are clearly evoked with costumes and attitude. Rain, snow, wind and sunshine – all the seasons happen effortlessly as time marches on. Not a moment of anyone’s time is wasted in set-up; the difficult convoluted plot moves along at a cracking speed.

Herrin is a genius.

It is over six hours in the theatre – four 90 plus minutes Acts. Yet it feels like ten minutes. And when it is done, you just want to watch it again. Immediately.

At the heart of the piece is Cromwell and Ben Miles is truly remarkable in that role. He misses no tricks, carefully delivering a performance of real depth, nuanced work and perfect characterisation. His transformation from the unsure, rain-soaked servant of Wolsey in the opening scene to the authoritative power-wielder who has dispatched Thomas More and is looking for a solution to the problem of the no-boy-child Anne Boleyn is impeccably, seamlessly done, with humour, passion and tremendous clarity. Wily, engaging, passionate, tricksy, intellectually robust, shimmeringly violent, dogged, unsure, loyal and devious – every facet is examined, highlighted and delivered. His final salute to Bishop Gardiner is as memorable a moment in the theatre as any I have ever seen. This is a superb performance.

He is not alone.

Nathaniel Parker is excellent as Henry. His hearty, robust, lusty but troubled monarch is the perfect accompaniment to Miles’ Cromwell. You see the poet, the lover, the religious scholar, the reformist, the regent and the fighter – separately and all at once. Wonderful – and the touch of ginger in the hair and beard offers much scope for humour. The unfeasibly tense moment when he signs the death warrants in the final Act is masterful.

The women are all superb. Lucy Briers is a magnificent Katherine of Aragon, all catholic superiority and regal certainty, and a mousy, vicious Lady Rochford. You can barely believe she is but one actress.

Lydia Leonard is terrific as the “flat-chested” “great whore” Anne Boleyn and she plays her as a completely rounded, but utterly flawed, character. It is impossible not to feel for her as she realises her neck will be severed by a sword. Everything about Leonard is assured and beautifully detailed.

Olivia Darnley is beguiling as Cromwell’s wife and then utterly different, but still beguiling, as Mary Boleyn. She is quite different again as Mary Shelton. Each character is deftly drawn and wholly believable. Leah Brotherhead is just as chameleon-like, playing an awkward Princess Mary and a shy, demure and totally uncertain Jane Seymour. And for good measure she delivers a sparkling and risqué Lady Worcester.

This is first rate acting of the highest order. Never for a second does the audience lose track of who these women are – with a turn of the head and a new costume, each is utterly compellingly different. This is most clear in the final scene, where Jane marries Henry, and the just-executed Leonard-as-Boleyn appears as a new maid in waiting. And no one could possibly be confused. It is devastatingly effective acting.

Look – every single person here is outstanding. It is a truly remarkable and gifted cast. It is almost impossible to believe that John Ramm plays both Thomas More and Henry Norris or that Pierro Niel Mee is both Cromwell’s loutish French servant Christophe and the young impetuous and boyishly handsome Brereton who beds the Queen and dies for it. But all of the doubling works in the hands of these wonderful actors.

If they were lesser performers, both Mee and Jay Taylor (who plays the French swordsman who dispatches Anne Boleyn) could have turned their parts into cod tragic over-acting. But they do not – each character is real, precise and utterly believable. The scene where Taylor explains how he will kill Anne is chilling – much more than any fake execution could possibly be. And Mee is a sheer delight throughout.

Paul Jessen makes good work of Wolsey (although personally I thought he cracked Wolsey’s character when playing Sir William Kingston, the Constable at the Tower. Something about the common touch was there in Kingston when it ought to have been to the fore in Wolsey), Daniel Fraser is perfect as Cromwell’s son, Gregory, Joshua James is terrific as Rafe Sadler, Cromwell’s protege (and his journey from boy to vicious cold politican is beautifully done), Nicholas Day is suitably blustery and vile as the Duke of Norfolk and Giles Taylor is perfect as Crammer.

As the doomed but beautifully idiotic Mark Smeaton, Joey Batey is perfect. So too is Jay Taylor as Thomas Wyatt, and especially good is Oscar Pearce as both George Boleyn (fatuous, entitled and incestuous) and Edward Seymour (refined, restrained, cautious).

Indeed, there are no real complaints about the acting. In some cases, there might have been subtle changes for the better, but really this is a thrilling ensemble capable of constant diversion and complete immersion into character acting. It is, far and away, the finest ensemble acting I have ever seen.

Herrin does everything amazingly well – but there are some remarkable set pieces: the pouring rain that accompanies Wolsey’s flight from his seat of power; the remarkable piece of theatre that Henry Norris puts on to amuse the Queen following Wolsey’s fall from grace; the moments when Henry first sights Anne then Jane; the snowy funeral procession for Katherine of Aragon; Cromwell’s calm and complete annihilation of the suitors of Anne and the remarkable transition from Anne’s execution to Jane’s wedding. Not to mention the technique of placing significant people in the shadows while exposition occurs – reinforcing the secretive nature of all the transactions.

It is as near perfect a piece of dramatic theatre as one is ever likely to see. What Herrin and his team have achieved here is utterly, unquestionably remarkable. It is good old-fashioned entertaining theatre, built solidly with fine acting and a tremendous narrative. There are no “concepts” here – just a desire to tell a marvellous theatrical tale.

Do anything to see it.

If Greg Doran can deliver productions such as this and his Richard II throughout his tenure as Artistic Director, the RSC will become, again, the greatest theatre company in the world. No question.

Book tickets for Wolf Hall/ Bring Up The Bodies