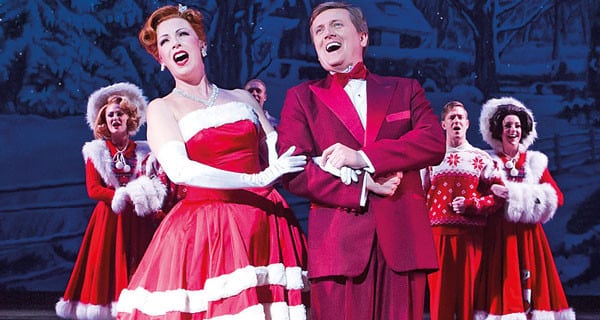 On the off-chance someone out there who produces musical theatre needs to learn the lesson that star casting will never suit a theatrical production, unless the stars can actually deliver the goods, there is no better opportunity for learning than in Morgan Young’s production of Irving Berlin’s White Christmas now playing at the Dominion Theatre. The top line stars of the production are Aled Jones and Tom Chambers but they are the least of the talent, skill and ability on display here.

White Christmas, of course, is a famous film, a star vehicle for Danny Kaye, Bing Crosby and Rosemary Clooney. Irving Berlin, at the height of his powers, provided a sparkling score and lyrics. This is an adaptation of that film and the material has been altered and augmented to suit a stage production. The stage version has been through several incarnations and the production at the Dominion is superior to the version which played on Broadway a few seasons ago.

It’s a silly story, absurd really, but it is of its time and there is a gentle geniality about the narrative which is affecting. It’s the tale of three sets of lovers who nearly don’t get together (four, if you count Mike and Ezekiel) set against a backdrop of misunderstanding, trickery, the need to put on a show to raise funds for a good cause, and, eventually, snow. It’s aglow with optimism, patriotism and scepticism in the way that only American musicals can – “corny as Kansas in August” never made more sense. In truth, the book, by David Ives and Paul Blake, is largely irrelevant.

White Christmas is a true song and dance show. It’s raison d’être is to afford an opportunity for spectacular routines and fabulous singing. Here that task is given a real boost by Musical Director Andrew Corcoran and the (about) twenty piece orchestra he conducts – they play Berlin’s music impeccably, with both swooning ease and brassy support, depending on what is required. The sound is lush, full and very welcome.

When the full orchestra is in swing, together with the full cast singing, in the big numbers, the effect is truly delightful. The sense of long ago Broadway is captured and sustained. Corcoran has delivered the musical goods here.

Randy Skinner’s choreography is frothy and fun. There are big tap numbers as well as more intimate moments of pleasure. The routines for Sisters (the girl version), The Best Things Happen When You Are Dancing, Blue Skies, I Love A Piano and White Christmas zing with delight and infectious charm. The female leads and the ensemble are magical to watch in these routines.

Being a show about Christmas, it is inevitable that there will be a grumpy old man and a bright, happy child, and, unsurprisingly, White Christmas delivers in this respect. As Susan, the precocious but delightful grand-daughter of war hero general Hank (Graham Cole), Sophia Pettit was perfection. Bouncy, questioning, happy and sincere, she brought the house down with her Act Two number, Let Me Sing And I’m Happy. It’s a warm and accomplished performance.

Cole is perfect as the cantankerous Hank, a man who needs an army to feel complete, or thinks he does. He is a superb grouch, a touching grand-father and, when he needs to, he delivers the goods in terms of emotional heart at the zenith of the plot machinations. He completely encapsulates that unique American sense of national military pride and makes it work.

He has more than able assistance from the Ethel Mermanesque Wendi Peters, who is simply triumphant as the loud (well, very loud, and appropriately so) Martha, the old Broadway hoofer who makes Hank’s life tick but who he doesn’t, at least until the very end, count as a blessing. Peters misses no moment – she is very funny, sings astonishingly well and gives her all. Whatever the billing may suggest, this is a true star turn.

Brendan Cull makes a meal out of what could be the thankless role of Mike, the stage manager of the barn where the show that has to be staged is to happen. It’s a surprise treat, his wacky, somewhat deranged but utterly endearing stage manager. And it sits beautifully with Phil Cole’s lugubrious “Yup” stagehand, Ezekiel. Together they set up one of the night’s most unexpected laughs. (It involves Maple Syrup but you will just have to see it for yourself!)

As the slightly channeling-Mitzi Gaynor Judy, Louise Bowden is practically perfect in every way. She is gorgeous, dances like a goddess, sings with grace and a beautiful tone, and is utterly truthful as the more romantically inclined of the Haynes sisters. Her work in I Love A Piano is breathlessly good. Another true star turn.

Equally impressive is Rachel Stanley who plays Judy’s sister, Betty. She is the older, more difficult of the sisters; where Judy falls head over heels, Betty has to be convinced that love is in the air. Stanley handles this with great aplomb; her warmth is genuine and she manages to make her character’s somewhat ludicrous behaviour seem perfectly understandable. She is marvellous with Bowden and they really ring true as siblings and their introductory number, Sisters, is an utter delight. She also sings up a storm in the second Act with Love, You Didn’t Do Right By Me.

Aled Jones and Tom Chambers are rather like the David Cameron and Nick Clegg of musical theatre: they look okay, they go through the motions, you can see they seem sincere and might be in charge, but there is just that nagging suspicion that it is not all quite right, that they aren’t good friends and they are getting away with it rather than doing the job.

There is simply no chemistry between the two men, and given that the entire show builds from the foundation of their great friendship, this is a real problem. But then, nor is there any chemistry between Jones and Stanley or Chambers and Bowden – and this is not for want of effort on the part of the ladies.

Neither man has the ease, the style, the grace that the leading men here need. Neither can dance as well as they need to dance; in this department, both get upstaged by the work of the male ensemble supporting them. Both are not very good actors, really, and neither are they singers with mastery over the requirements of a Berlin score.

And yet…they both get away with it. Although they might not be in the same league as their co-stars when it comes to musical theatre performance, they are excellent fakers. Jones sings better than Chambers and Chambers dances more assuredly than Jones. Their version of Sisters, which ought to be a comic masterpiece in Act Two, is flat and dull, proving that it is the women who light their respective stage fires.

The ensemble is terrific, with stand out turns from Jonny Labey, Karen Aspinall, Stuart Winter, Matthew Whennell-Clark and Jennifer Davison.

Anna Louizos’ set works well enough, although there are a lot of “in front of curtains” moments and some scene changes seem very long. The White Christmas reveal is worth waiting for and the almost puppet-theatre effect of the overall design works very well indeed. Especially good is the train scene and the swanky New York Nightclub scene. Complementing Louzos’ work superbly are the costume designs from Carrie Robbins – they are as camp and glitzy as could be hoped for, especially the piano frocks for the opening of Act Two.

This is great holiday entertainment for the whole family. Act One could be pacier, but the second Act zips by, and overall there is so much joy and talent that pretty much everyone, apart from the most committed bah-humbugger, will find a lot to love, and maybe even a tear or two, in this Yuletide spectacle.

But, how much more delicious would the treat be, if the two “stars” were more Danny Kaye and Bing Crosby and less David Cameron and Nick Clegg? But the women, the other male leads and the ensemble carry the night happily. Truly – who needs “stars”? Can’t people who can shine be the ones who are cast?