Less is more in comedy and Christopher Luscombe directs this 1930’s play with clarity, precision, and above all speed, writes JBR. 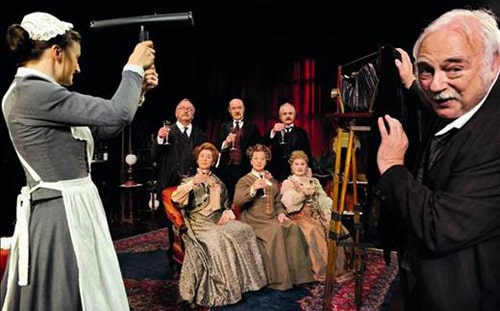 In recent years, the West End has, of necessity, conserved pennies. What joy then, that Christmas has come a little early at the Garrick with a recession-busting cast – fourteen, no less, assembled for Priestly’s elegant comedy of manners, When We Are Married. And what a cast!

As Susie Blake, Michele Dotrice, David Horovitch, Sam Kelly, Maureen Lipman and Simon Rouse, promenade into the drawing room in their evening finest, it is an unashamed nod to a veterans parade of some of the greatest comedy stars of our times. To have six comedy greats in one company is an un-missable theatrical coup. To add Rod Hudd’s dishevelled Henry Ormonroyd, Rosemary Ashe’s brazen Lottie Grady, and Lynda Barron’s smashing, literally, comic turn as Mrs Northrop, well, Ambassador, with these you are spoiling us. As Penelope Keith and Peter Bowles prepare to take up residence round the corner, at The Haymarket, in The Rivals, the West End is paying a glittering and fitting tribute to a generation of actors whose skill is unrivalled.

It is not just these evergreens who make When We Are Married such a pleasure; Priestly’s writing perfectly captures the rhythms and cadences of Yorkshire, and the dour, blunt humour is handled expertly by Jodie McNee as housemaid Ruby Birtle.

Simon Higlett’s delightfully appointed set elicits a round of applause as the curtain rises, while director Christopher Luscombe keeps a tight reign on proceedings. Less is more in comedy and Luscombe directs with clarity, precision, and above all speed, allowing us to forgive Priestly’s over-hasty conclusion. He preserves too, the delicate balance between comedy and tragedy. As Priestly punctures the snobbery of the Edwardian middle class, Luscombe’s finely judged pacing allows the air to seep out slowly, revealing a little of the pain beneath the smiles. A series of delicately drawn vignettes in the second act resist the tendency toward melodrama and are all the more touching for doing so.

If the younger members of the ensemble, Peter Sandys-Clarke, Laura Haddock and Tom Shaw seem superfluous to the action it is through no fault of their own, and if certain strands of the plot seem too neatly and swiftly tied up, the fault is Priestly’s and no-one elses. When a company is having this much fun, the audience are merely there to help them ride the wave.  A veteran cast in a 1930’s play, set at the turn of the century, may well prove to be the hit of the season.