Julian Eaves reviews West Side Story by Leonard Bernstein and Stephen Sondheim at the Bishopsgate Institute. 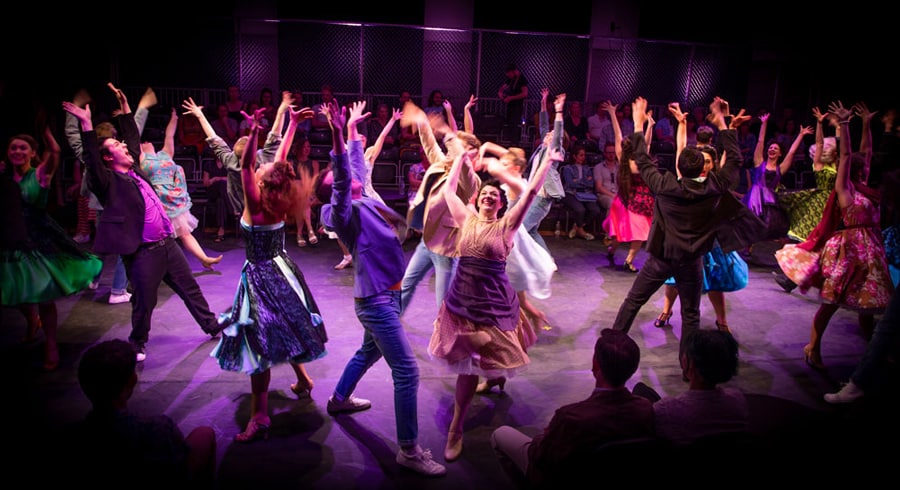 Two years ago, this enterprising not-for-profit organization stunned the musical theatre scene with its superb ‘Ragtime’, and now nearly exactly the same artistic team is back to present a follow up in the shape of the seminal Bernstein-Sondheim-Laurents-Robbins-Shakespeare show of shows, transposing the romantic tragedy of ‘Romeo and Juliet’ into the gang-riven tenements of New York City in the Fifties.

The chief glory of productions like this, of course, is to experience a big Broadway show with a full-sized orchestra (of 28), here under the assured command of Ben Ferguson, and with a full-sized company (of 39!….technically amateurs, but many of these have a fully fledged training and some stand on the brink of beginning professional careers).  It is impossibly difficult to mount commercial, or even subsidised productions of such dimensions, and not for nothing were these performances all but sold out. 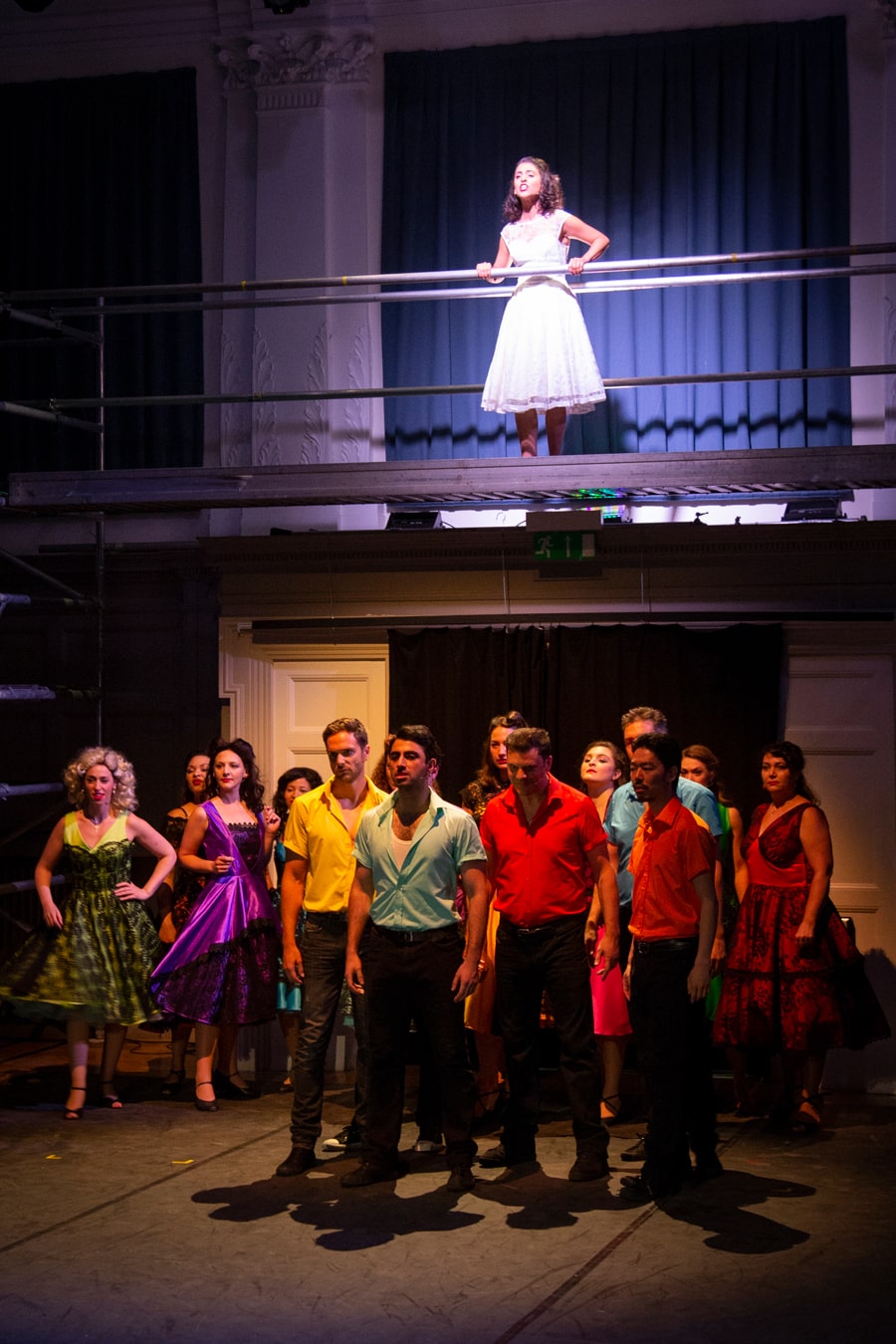 Toby Hine is the young tyro of a director who has taken on the task of refreshing this warhorse of the mainstream rep.  For years, the work was fixed in the amber of Broadway legend, and licensed productions had to comply with an entire manual of instructions on how EVERY single movement of the performance had to be executed – faithfully, indeed slavishly, recreating the inspired and protean Jerome Robbins original direction and choreography.  As time passed, this made it very, very difficult for productions to live and breathe in the here and now: each outing made the work look tireder and deader than the last.  Only the wonderful, evergreen movie kept the reputation of the work alive.

Fortunately, ten years ago, these strictures were suddenly released, and since then a new culture has arisen of attempts to stay faithful to the spirit of the work, while infusing it with the necessary youthful energy and intensity that are essential for its simple-minded characters to gain any credibility.  Laurents’ book is often praised, but the abbreviations of his script vis-a-vis the lengthy original still present abundant problems: the first act still comes across as often prolix and lethargic, while the second is a helter-skelter race to the finish, where we miss the sense of tragic inevitability. 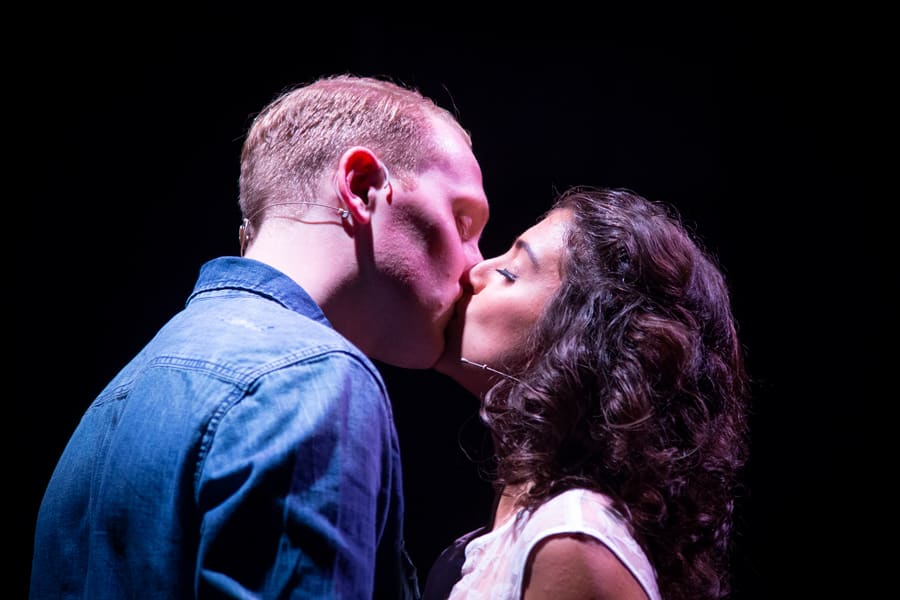 Undeterred, this production threw everything it had at the project and came up with more than sufficient magic to enchant and beguile.  Hine once again opted for a traverse staging in this difficult room, and made a virtue of the site’s Grade II listed status by creating runs behind the raked seating, in which characters apppeared to envelope the audience in the action.  No stage designer is credited here, so we assume this is all Hine’s doing.  The production’s costumes came from the tireless Stewart Charlesworth, who created a bold distinction of washed out pastels for the Italian-American Jets and bold, flashy primary colours and black trousers and lace for the Puerto Rican ‘immigrants’ with whom they are in eternal conflict.  Jack Weir lit it with his usual sense of theatrical distinction and shape, incorporating some brave dynamic effects.

However, it is for the extensive choreography that this musical drama has achieved legendary status.  Here, we got the work of an entire team of dance arrangers: Lemington Ridley started things off, designing most of the movement for the show; then, when he left the production, his place was taken over by Chris Whittaker, freshly released form the ill-fated tour of ‘Thoroughly Modern Millie’.  Whittaker, with Guy Salim – who also supervised the whole choreographic panoply, reshaped many numbers and entirely re-staged others, as well as completing what had been left as yet undone.  It is a wonderful testimony to the combined professionalism of all concerned, that, despite these changes of personnel, the overall conceptualisation of the show’s choreographic vocabulary and style remained remarkably consistent and coherent, and all that with a cast who were – with few exceptions – not especially skilled or practised dancers. 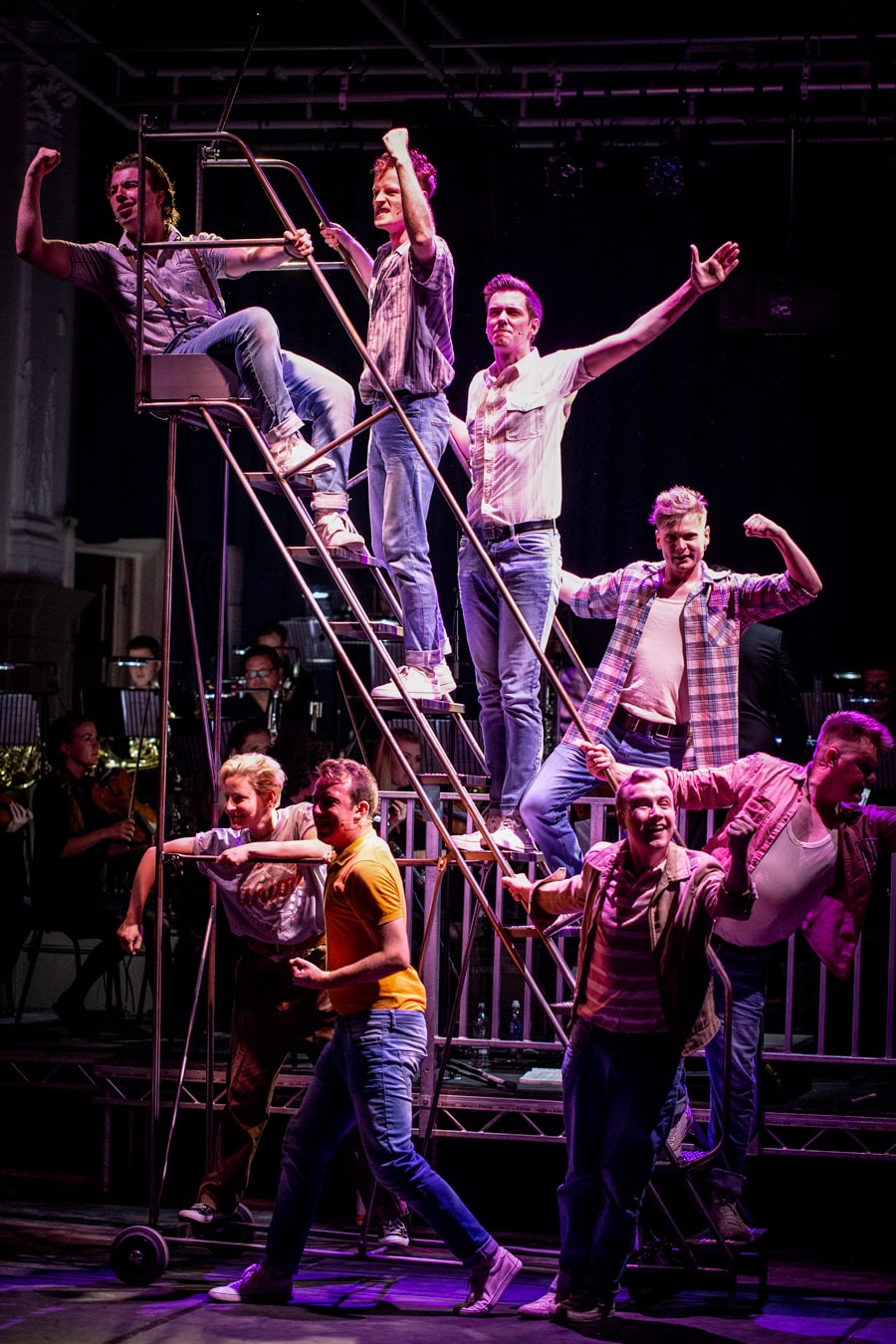 In the vocal department, however, stronger experience was essential, and amply provided by the glorious leads, the lush high tenor of James Gower-Smith’s Tony was a total delight to listen to and wonder at, and the thrillingly heroic soprano of Emily McDouall’s Maria was every bit as persuasive as any great leading lady in the West End, inf act, she also distinguished herself with remarkably strong dramatic skills, negotiating the more clunkingly melodramatic turns of the second act with aplomb.

Alongside them, Luke Leahy’s Riff was wonderfully strong and clear, and Victoria Greenway’s Anita a model of poise and burning passion.  This brilliant contrast was further supported by the strident machismo of Christopher Georgiou’s Bernardo and Ben Woolley’s cool Diesel.  Meanwhile, as the occasional and rather hapless grown-ups, Will Howells was a cool Schrank, Stephen Hewitt a wantonly clueless Doc, and Drew Paterson the much put-upon Officer Krupke.  (In a pre-show talk-show, we got a performance of the number that existed before the writing of the comic number that takes that officer’s name, and it was fascinating to see how the show was improved by getting a more up-tempo, and wildly comicbook ‘turn’ in the second half.)

The final word, though, has to go to the terrific orchestra, whose extended ‘exit music’ concluded proceedings with a mini-concert.  A superb event, showing professional creatives and amateur performers working together at an impressive level.