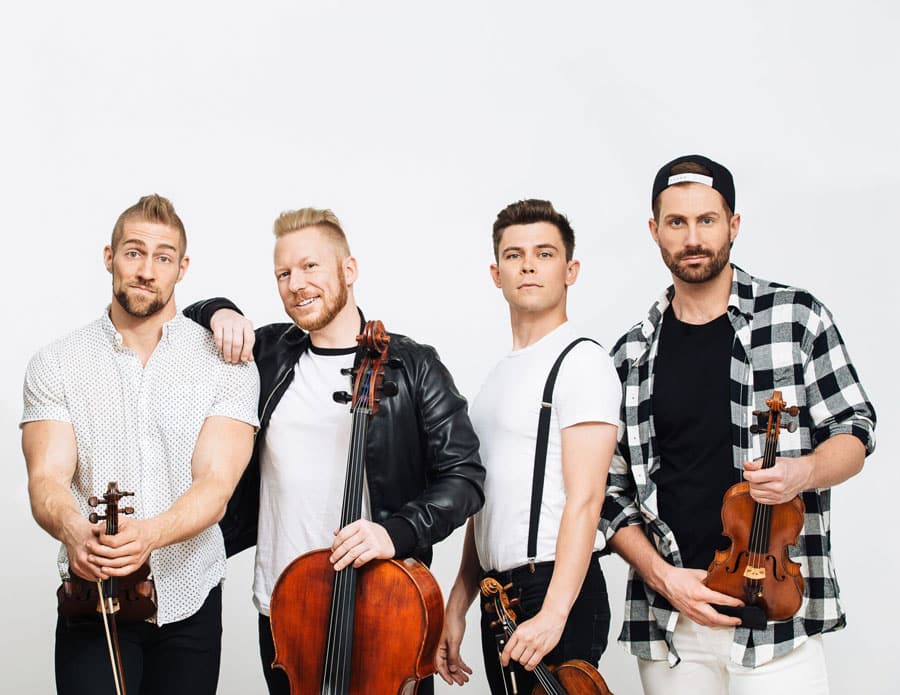 Well-Strung is a string quartet with a modern twist; they play classical pieces including Bach and Mozart while singing electrifying harmonies of pop music hits. The quartet is performing for only two nights in London at The Crazy Coqs cabaret venue.

Way back in 1981 the phenomena that was Hooked on Classics set purists aquiver with indignation of the sullying of art music. However many of the hoi polloi were converted to an appreciation of the genre. It was popular classics set to a disco beat in case you missed it. Well-Strung takes the concept a quantum step further.

To borrow the term from Glee this traditionally composed quartet of 1st and 2nd violins, viola and cello have mashed up the classic repertoire with pop tunes that produces a programme full of ingenious twists and turns. The icing on the cake is that they not only all sing magnificent solos but also glorious close acapella harmony.

Purists of classical music would prefer to use the term fusion I’m sure. Musically the best examples of this artifice is the blending of Copeland’s Rodeo with a pop song from Taylor Swift and the mash up of Vivaldi’s Winter with Lady Gaga’s Paparazzi. It would have been interesting to know the reasoning behind the musical choices. Were they musically based or was the choice thematic?

On first violin and frequently lead singer is Edmund Bagnell whose opening vocals in ‘Be My Baby’ were luscious. Bagnell also sang a haunting opening section of Cohen’s Hallelujah accompanied by Daniel Shevlin on solo cello. Chris Marchant (2nd violin) proved his versatility by swapping to an acoustic guitar and taking the lead in an Ed Sheeran song that was beautifully mixed with Jesu, Joy of Man’s Desiring. The addition of the Bach melody on viola, played by Trevor Wadleigh, was inspired.

The arrangements are so dense that the moments of acapella singing stand out in blessed relief for their simplicity. Contrast was also provided by the unexpected but welcome guest appearance of soprano Lisa Pullman whose pure tones added another dimension to Moon River.

To be able to play in a string quartet with all music known by heart is a remarkable feat but to play and sing at the same time is difficult beyond imagination. Frankly the skill level is astounding but there is a price paid for the complexity of the material and there were small lapses in pitch control both in the instrumental and vocal components. However the minor glitches did little to detract from the entertainment value of the performance and moments of beauty and joy were more than sufficient compensation.

Above all the energy of the live performance carries the audience to a cheering and clapping storm that demands a rousing encore and a buzzing end to the evening.

FIND OUT MORE ABOUT WELL-STRUNG