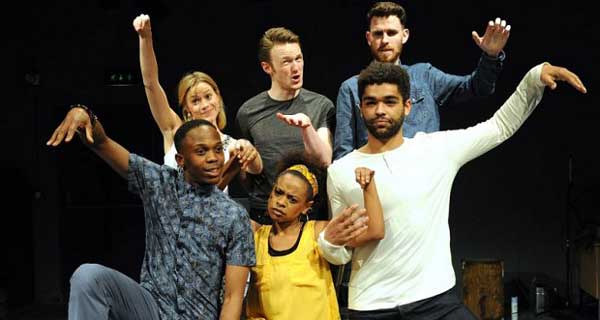 Now playing at the Bush Theatre is the UK premiere (Gbolahan Obisesan directs) of Jackie Sibbles Drury’s play We Are Proud To Present A Presentation About The Herero Of Namibia, Formerly Known As Southwest Africa, From The German Sudwestafrika, between the years 1884 – 1915.

Yes, that’s the full title. Which, evocatively, conjures up notions of political theatre fuelled with anger and outrage about a period of relatively recent history steeped in persecution, blood and unfairness. As you enter the auditorium through the rehearsal room, you can almost smell the unwashed theatre students who have earnestly, yet slightly rabidly, put together this piece of protest performance art.

It starts as a kind of lecture, as the audience are introduced to the six actors who will play a multitude of roles and are given an overview of the near genocide of the Herero people. So the sense of audience and players is quickly established and the groundwork set for an engaging evening of traditional non-traditional episodic drama covering a chunk of embarrassing and appalling history.

Because, at its heart, the piece ponders serious questions: how do we understand history? How do we relate to people who were murdered a century ago? How can such characters be played faithfully? How can modern performers hope to play the unknown characters of the past? Should they? Is feeling more important than anything else when performing? Can white people play black people? Is the stereotypical modern notion of accents appropriate if real stories are being told? Is there a true difference between behaviour in any war? Is realism better than reality? Where is the line between art and history? Why are some actors egotistical self-important tossers?

All of which sounds like it makes for an evening of dull didactic worthy speechifying, with pretentious characters mouthing platitudes and great truths.

Through a series of impactful scenes, some of which are very funny, some quite devastating, the company of actors explore these topics in non-obvious ways, breaking the conventions of traditional drama and challenging the audience to get to grips with the difficult topics at play.

Some of the acting is astonishing in its subtlety and intensity. Joshua Hill, in his stage debut, is simply outstanding as Another White Man, a typical cocky good-looking young actor (there are some marvellously witty and insightful “I am a better actor than you moments” in his interactions with Black Man) who does two quite astonishing things: he plays an African grandmother at one point (no costume, make-up – just him) and she is no caricature, she is intensely real; at another, he recounts an horrific tale of his great-grandfather’s selfish murder of a fellow black soldier in an attempt to get to understand the feelings of a German soldier who has murdered an Herero man who just wanted to go to his home. Everything Hill does is polished, clever and stylishly done. He is a star of the future.

As Black Man, Kingsley Ben-Adir is also excellent. He is the intense, broody actor, the one who was “very successful in Germany” (in seducing young fräuleins) and who is passionate about finding the African spirit, but equally passionate about his naturally being better at understanding the Herero because he is black. He also delivers a finely nuanced and wide-ranging performance and he creates both the softest and the harshest moments in the piece.

The other performers are all good, but none really get the opportunities the script affords Hill and Ben-Adir. Ayesha Antoine is particularly good at the start of the piece, awkwardly introducing the audience to the concept, the Herero and her fellow actors. She is marvellous to watch and never loses focus. Kirsty Oswald, the White Woman, and Joseph Arkley, the White Man, splendidly essay a range of characters, as does Isaac Ssebandeke, who has the difficult task of closing the play in silence and mute distress.

This may give the impression that the purpose of the play is really to focus attention on the skills of the five actors who give life to the playwright’s vision.

There is a lot of deconstruction going on – the set, such as it is, is ripped up in front of the audience. The story of the Herero genocide is deconstructed and shown through different prisms; letters the German soldiers wrote; the actors’ instincts about how the Herero felt despite the absence of any first hand evidence; the sense of history; the dislocation of the past; different ways in which groups can impose their will upon weaker, or even stronger, individuals.

I can honestly say I have never seen a theatrical production quite like this before. It feels anarchic, organic, eclectic and chic – all at once. There is a rhythm to the proceedings which is almost hypnotic. You are drawn into the scenes which the actors perform as set pieces, but equally are fascinated by the process of rehearsing and formulating those scenes. There is humour, viciousness and honesty in equal proportions.

And when, finally, Black Man is ridiculed and then lynched and hung – it is powerful, compelling and frightening stuff.

And it leaves you pondering about what you have seen and thirsty for knowledge about the intricate details of the Herero Genocide.

At a particularly climactic moment, a woman in the audience had a minor stroke and the play had to stop for about thirty minutes while she has given medical attention and sent to hospital. When the actors resumed, they picked up the mood, the tension and the gritty truth of the scene that had been fractured – as if there had been no interruption.