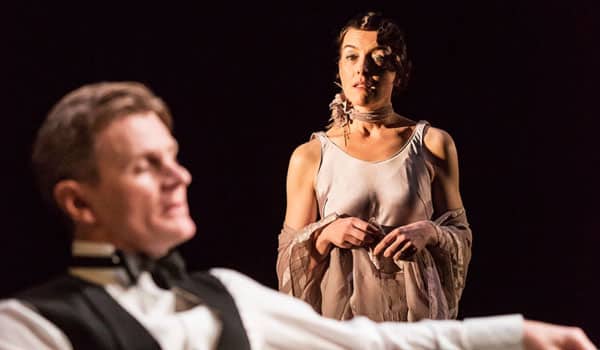 The sound was sudden, shocking: a short, bone and breath rattle, an unmistakable sound of acute distress. A woman raised the alarm. A doctor rushed to assist. And, on stage, two actors became still. The stage manager called for calm and explained that the performance had to stop while assistance was rendered to the ailing patron. Stay in your seats was the entreaty.

But the play had almost run its course; it only had about five minutes to go. So, many many patrons got up and left the theatre rather than wait for the recommencement and final playout. What a waste for them. For those last, vital, minutes had much to offer.

An evocative image of an upturned wastebasket, its contents littered seemingly randomly: impossibly beautiful, deftly summing up the elegance and point of the play. The moment when the now alone Frances realises that her trust and friendship had been abused by the greedy folk she thought were her friends in society and the Tory party. But, most of all, the heart-breaking sequence where Walter, the young assistant to Frances’ solicitor brother, falls apart, apologises for that, and then angrily fumes about waste, while all the while getting on with filling the void, covering the absence, being the best he can be.

This is Roger Michell’s revival of Harley Granville Barker’s 1907 play, Waste, now playing at the Lyttleton Theatre. This is, by some distance, the best production to play on a National Theatre stage since Rufus Norris took the reins. It is elegant in every way, features a beautiful set and costumes from the remarkable Hildegard Bechtler, and some utterly superb central performances.

It is a testament to the strength of the play and the impressive nature of the cast’s abilities that it was possible for the moment to be recaptured after the indisposition of the patron and the following, understandable, melee. Equally, of course, the possibility that the patron may have lost his life added an extraordinary frisson to a play whose themes include the pointless of individual existence in a world dominated by expected behaviour, tribal conscience and rules, practices and mores dictated by those who profit from continuing without change. Thankfully, the patron was not in danger as the auditorium vacated; but for those who were there, this was a night at the theatre not to be lightly forgotten.

Barker’s play is extraordinary, especially given that it was written over a century ago and revised by him in the late 20’s, the original having been banned from performance. The notions and complex philosophies which underline the narrative are as fresh, vital and important now as then. The need to invest in the future, to educate the young properly. The hopelessness of political cabals. The marginalisation of women. Double-standards in public life. The dirty compromises of party politics. The terror a true rebel with a proper cause can create in the complacent and borne to rule. 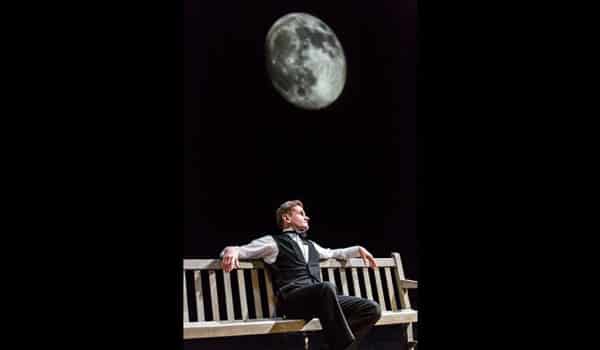 More than once as the drama played out, the dialogue crackling like some product of Chekhov, Shaw, Ibsen and Stoppard, brilliantly and resonantly, the thought came that with a few updates this could be a play set today dealing with Jeremy Corbyn and the NHS or Tax Credits or the Railways. So many of the points and tensions perfectly expressed here are apt, incisively, to the political spectrum of 2015. Truly, serving politicians should be forced to see his production as part of their continuing education.

The play has an old-fashioned structure but suffers not for this. Characters and situations are introduced without bulky exposition; as Willy Loman might have said: Attention Must Be Paid. This is not theatre for the channel-surfing type; it is engrossing, absorbing theatre which requires full, rapt attention and rewards that in spades.

Michell’s directorial vision is telling and persuasive. The main characters are vividly realised and Bechtler’s oversized and abstract design perfectly sets the central theme – people are small in the grand scheme of things. There is assiduous detail in both set, costume and approach, as well as symmetry and beauty. The image of the moon in the second part of Act One is spectacularly beautiful, a perfect contrast to the action that plays out under it. As the first half opens, there is a core activity and a silent watcher; the second half commences the same way, but the circumstances are entirely different. The more things change the more they stay the same.

Olivia Williams, such a picture of emotional restraint and complex inner thought in the superb television series, Manhattan, is here, as Amy O’Connell, a flibberty, jibberty kind of liberty taker, an emotionally fragile, heart-on-sleeve eccentric driven by passion and despair in equal measure. She is in glittering form, fragility and sensual honesty emanating from her every graceful move. Williams beautifully shows the ravages that the cruelty of men have generated in her, and her mounting sense of despair as circumstances conspire against her is perfectly judged. It’s a performance of great delicacy, confronting and refreshing. Even though her character is absent for Act Two, Williams’ presence is constantly felt.

As the driving force of the play, Henry Trebell, the man with the vision for education for all, Charles Edwards is compelling throughout. He has the introspection and off-handedness of the character absolutely right, and makes you clearly understand that Trebell is a man who is passionate only about his principles and ideas – he is incapable of being passionate about the people who form his circle. He is at his best in the difficult scene where he is confronted by Williams’ Amy and his tense address to the grandees of the Tory party, when the question of his reputation comes in conflict with his dreams for changing the future. Generally, his quieter moments are also excellent, although his final scene seemed less powerful than Edwards’ performance suggested it could Hubert Burton, Emerald O’Hanrahan, Michael Elwyn, Andrew Havill, Louis Hilyer, Gerrardbe. 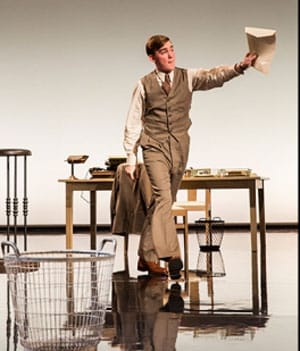 But that may be the point. Trebell can only see what he wants and only reacts to that; he is not swayed by irrelevancies like love or friendship, even though his presence inspires much in others. So his final scenes, where his hopes for the future have been ended by receipt of a letter, perhaps reflect that. He simply gives up. But just as others express anger at the turn of circumstances, so too could Trebell: passion about the loss of his principled dream could be as potent as that of its possibility. But this is a small point in the overall scheme of this suave, poised performance.

Making an impressive debut at the National, Hubert Burton is exceptionally good as Walter, the almost mini-me Trebell who works as his assistant. Burton provides a perfect contrast to Trebell’s way: pursuing his dream bride (a terrific Emerald O’Hanrahan as an assertive feminist of sorts) and becoming engaged, while commencing work and, essentially, waiting for life to happen to him. He provides many comedic touches across the course of the play, representing, as his character does, the entitled and uninvolved. But Walter is a watcher and learner, and Burton demonstrates the subtle but unarguable effect that exposure to Trebell’s principles and practices has wrought. His final scene is perfectly judged, extremely affecting.

Being a play that looks at the psyche of one key man in a swirling mass of political intrigue and society gossip, Wasteinevitably involves Government types. Some, as played here, are blustery, hackneyed caricatures, hard to hear. Others are remarkable.

As the wily Parliamentary leader, Horsham, Michael Elwyn is a study in oily, calculating finesse. Like good butter, he is salty, and spreads himself around, trying to ensure he is on top of anything worth having. He paces like a frenzied parrot, waiting for the dominos to fall, determined to be there waiting for the last one to succumb so that he may stand firm. Elwyn was totally believable as the patrician weasel in charge of the Tories, equally ready to silence scandal as to flame it, whatever would serve best the political goal that suited him. A terrific performance.

Andrew Havill, as the medical specialist Sir Gilbert Wedgecroft, and Louis Hilyer, as the blustering self-made Northern millionaire, Russell Blackborough, both succeed in enlivening their somewhat stock characters. There is a real sense of togetherness in these performances and those of the other “working” members of the political party that will either back or abandon Trebell’s plan. Trebell is clearly marked as an outsider to this mob. 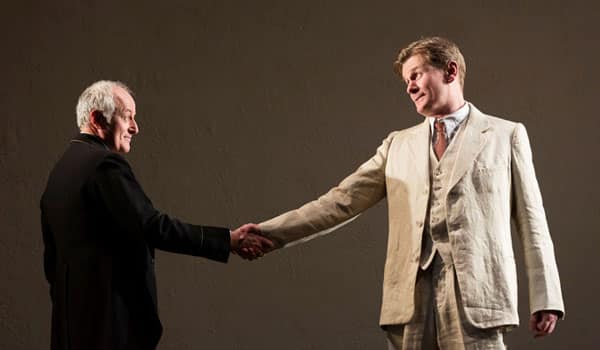 Another outsider of this kind, Trebell’s colleague in principle, but not friend, is Lord Charles Cantilupe, here brought to vivid life by Gerrard McArthur. Setting himself apart, both physically and vocally, from his fellow Tories, McArthur provides a genuine opposite force to Edwards’ Trebell. He insinuates himself around the stage, laconic and silky, like a kind of Shere Khan spider, playing with those caught in the webs where he chooses to walk. Cantilupe’s fierce religious convictions bring him into conflict with his fellow politicians and Trebell, but for wholly different reasons. McArthur’s delivery of one splendid line about perjury brings down the house, but every vocal choice he makes here marks out his Cantilupe as something other than the expected stuffy upper class mandarin he might so easily have been. It’s a first rate turn.

As Trebell’s sister, Frances, Sylvestra Le Touzel is slighty too reliant on her magnificently smoky voice to really set fire to her character, particularly in her blistering rejection of Lucy Robinson’s blithe Lady Julia. There is more to this character than Le Touzel mines; she is, after all, Trebell’s sister. Doreen Mantle is delightful as the matriarch with a long memory and little interest in change – she makes Violet Grantham look positively radical. Fleur Keith is memorably efficient as Bertha.

Rick Fisher’s gorgeous lighting (that beautiful Moon!) and Matthew Scott’s superb incidental music fuse with Michell and Bechtler’s work to create a set of spaces which are both sterile and resonantly chic. The final image of the spilt wastepaper basket is truly remarkable.

Barker worked tirelessly during his later life for the establishment of the National Theatre and without his efforts there may never have been one. How fitting then that this great play should take pride of place on a National Theatre stage to weave some magic, especially at a time when theatrical magic has been in short supply.

Waste runs at the National Theatre until 19 March 2016. Book Tickets